About a year ago, NBP Capital and Provenance Hotels — both based in Portland but with different focuses — had a chance encounter. At first, NBP Capital wasn't looking for anything serious, just some help to renovate and operate a hotel.

But then in walked Provenance Hotels, which has a history of developing and building hotels throughout the Northwest.

Things started off casually, with an agreement to renovate the historic Woodlark and Cornelius buildings in Portland, and turn them into a hotel.

But then the relationship got serious. About a year after their first meeting, the two companies decided to commit and form a partnership.

“We went from a blind date to full-on marriage very quickly, which speaks volumes to how well we clicked,” said Bashar Wali, president of Provenance. 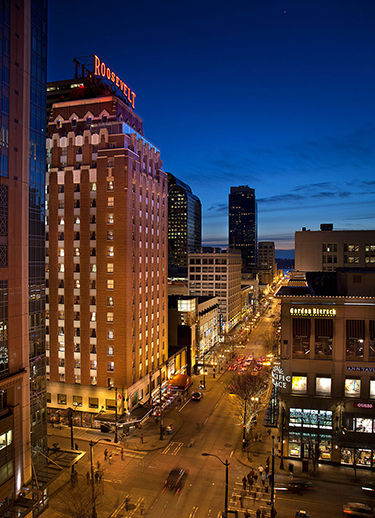 Last month the happy couple (of companies) announced a second project — and their first in Seattle. They bought the Roosevelt Hotel at 1531 Seventh Ave. in downtown Seattle.

That deal just cleared yesterday: the price was $37 million.

The first priority now is finding a restaurant for the Roosevelt's ground floor retail space. Wali says they want something unique and “hand-crafted,” rather than a chain restaurant.

Provenance and NBP hinted at another Seattle project, but they won't reveal details until the deal is done.

Though they didn't know it at first, it turns out they both really wanted a long-term relationship, even though it's not exclusive and they'll continue to do some deals separately.

Lauren Noecker Robert, managing member of NBP, said they are like-minded in the way they approach projects, and neither one wanted to just bounce around from partner to partner.

But in other ways the companies are very different and, as we all know, opposites attract.

NBP focuses on what Noecker Robert calls the “least sexy” part of real estate: buying and renovating older apartment buildings. As that market heated up, NBP wanted to diversify its holdings, so the company has gotten into office and some industrial properties. But NBP had never done a hotel project before.

Wali said hotel development is all about creating a story and telling it to customers. NBP can learn and adapt that kind of story-telling to enhance its other properties and set itself apart in an increasingly competitive apartment market.

“We are all selling an experience here, and what distinguishes one office or apartment from another is a holistic experience rather than just the brick and mortar,” Wali said.

Provenance will get access to new investors, which opens up possibilities for more projects.

Provenance already has a presence here. It owns and operates Hotel 1000 and Hotel Max in Seattle, and Hotel Murano in Tacoma. It also owns Seattle's Paramount Hotel.

Wali is bullish on Seattle, for reasons that extend beyond Amazon.com and the city's hot economy. Seattle has recently become a huge international travel destination, he said, on par with San Francisco.

Provenance is a long-term owner, so ups and downs in this market don't matter as much. A company trying to buy a hotel and turn it around five years from now could be getting in at the wrong time, Wali says.

Several new hotels are set to open in the next few years. Wali says if he were a short-term owner looking to buy or build a hotel, he would wait and see what happens with all these new ones before making a move.

Wali said Provenance is looking at a lot of markets around the country. Seattle and Portland are two of its primary cities, but it will open a hotel in New Orleans next month, and is looking at projects between Houston and Tampa, an area Wali calls the “third coast.” 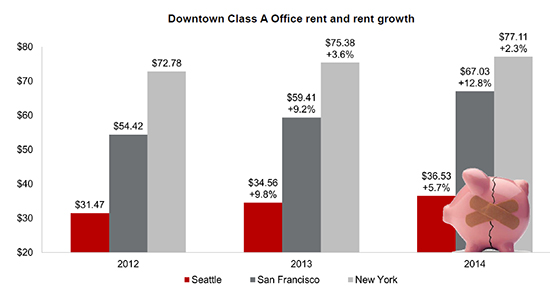 Seattle regularly gets ranked alongside San Francisco and New York on lists of real estate hot spots, but it looks like we have one big advantage over them: We're cheaper.

An analysis by Jones Lang LaSalle shows that while Seattle office rents have been rising for years, they are still well below San Francisco's or New York's.

Office rents have been rising fast in San Francisco. Rents increased 12.8 percent in 2014, after rising 9.2 percent the year before.