On the Block: Proposal for a promenade along Melrose is a great idea, but it doesn't go far enough

South Lake Union, as everyone knows, is clotted with people and congested by its success. Full of bright young workers from Amazon, UW School of Medicine, Fred Hutchinson and various tech companies (Facebook now, Google coming), the place is gridlocked every evening at rush hour.

Streetcars can't move any faster than automobiles; only pedestrians and cyclists can slice through traffic and get home — or to a bar or restaurant, also growing in number.

For all those reasons and more, I'm intrigued by Mike Kent's proposal for Melrose Promenade, which earned a 2014 award from Washington Chapter of the American Society of Landscape Architects. In August, Puget Sound Regional Council and SDOT recommended it for a $3 million federal grant to help create a neighborhood greenway. Kent is also pursuing a city grant to round out the roughly $4.3 million budget.

At the same time, architect Christopher Patano has floated the idea of putting a 45-acre lid park over Interstate 5 — with housing, multipurpose arena and commercial development included — that would extend all the way from Freeway Park to SLU. No price tag has been attached to this fanciful mega-project, though it drew scornful notice from architect Mark Hinshaw on Crosscut.

Melrose Promenade is much more modest. It would run along the blighted, noisy east side of Interstate 5, following Melrose Avenue East from Lakeview Boulevard East to East Pike Street — a distance of about one mile.

The south end is more urban and developed, but the north section from Lakeview to East Denny Way is more tantalizing, with epic views of SLU, Elliott Bay and the Olympics.

I say tantalizing because of Tantalus, the Greek mythological figure who was starving and doomed forever to see fruit and water he could not reach. He was punished for killing and dismembering his son, Pelops, as a sacrifice to the gods.

So, too, did Seattle chop up and divide Capitol Hill from the Cascade neighborhood when we built I-5 during the 1960s. Cars were the priority, not pedestrians, and in those days South Lake Union was full of auto dealers, repair shops and tire stores. 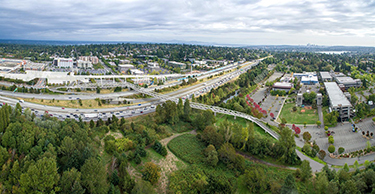 Image courtesy LMN Architects [enlarge]
This is LMN’s early design for a bike/pedestrian bridge over I-5, connecting the future Northgate light-rail station with North Seattle College.

Designed by Berger Partnership, Schemata Workshop and Weinstein A+U, the Melrose Promenade proposal does not lack for taste or brains. It has an entirely restorative intent, with greenery, traffic-calming measures, public art, scenic viewpoints and a park at the north end — where the present Melrose Trail is essentially a homeless encampment.

But although it's tiny compared to Patano's freeway lid proposal, Melrose Promenade doesn't go far enough. Background notes for the proposal say there was once a hillclimb that connected Eastlake to Melrose via Republican Street. Completed circa 1910, the stairs and belvederes predated the era of private auto ownership. People in those days walked to catch the streetcars and interurban railways — as we're again learning to do today.

For those reasons, Melrose Promenade reminds me of a 20-year-old proposal co-created by an architect friend, Andrew Russin, to restore the link between Capitol Hill and SLU via a pedestrian bridge. This was before Cascade became South Lake Union, and before Amazon became, well, Amazon — back when it just sold books from a SoDo warehouse.

Ironically, Russin recently told me that the 1996 proposal — which he and Marc Roehrle designed for an AIA competition — followed the rejection by voters, twice, of the proposed Seattle Commons park. Cascade was struggling then, unlike SLU today. And Commons supporter Paul Allen was left with the challenge of developing 11.5 acres of land the city had purchased with his $20 million loan. We all know how that turned out.

So to the PSRC and the smart folks behind Melrose Promenade, I say: Four million bucks ain't enough. Be more ambitious. If you really want to enhance east-west pedestrian flow (which will boost Capitol Hill apartment values and spur new development), look to the example up at Northgate. 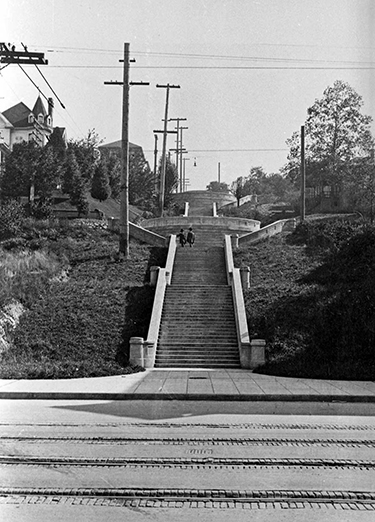 Image courtesy Seattle Municipal Archives [enlarge]
In 1910, this hillclimb was built to connect Eastlake to Melrose via Republican Street.

There, LMN Architects has proposed a wonderful, 2,000-foot-long bike/pedestrian bridge that would span I-5, connecting the coming light-rail station (in 2021) with North Seattle College. This proposal is only preliminary, and SDOT hasn't selected a final team for the project, which is estimated to cost about $26-33 million.

The distance across I-5 from Melrose to Eastlake is about 315 feet, far less than the span planned for Northgate. The vertical drop to Eastlake — assuming a basically horizontal crossing — is about 60 feet. And, Russin reminded me in a recent conversation, there's a median in the middle of I-5 that would allow a mid-bridge pylon support (as LMN proposes up north).

Russin said that his and Roehrle's Republican Street overpass idea was partly inspired by the waterfront elevator/stair tower at Lenora Street, which connects Western Avenue to Alaskan Way.

And a happy postscript: The Greek gods eventually righted Tantalus' crime and reassembled Pelops, who was renowned for his beauty. Perhaps through a similar act of reunification, the Russin/Roehrle and Melrose Promenade proposals could be joined into one — and reconnect two of Seattle's most dense and walkable neighborhoods.