The evolution of urban development on First Hill

By BRAD HINTHORNE
Perkins and Will

First Hill has the distinction of being one of Seattle’s oldest neighborhoods, having gone through many iterations since its establishment in the 1870s. The area has, at different periods, been home to Seattle’s most prominent families, some of Seattle’s earliest residences and emerging artists.

Now, First Hill is in the midst of another transformation as health care institutions, cultural organizations and a growing, engaged residential community have been working to “fill in” the edges and create a more seamless vibrant community.

In recent years, First Hill has been the recipient of incredible design-forward, community-oriented development. Perkins and Will, alone, is in the planning or construction stages of more than 3.5 million square feet of new construction with a combined value just under $1.8 billion, including over 1,000 residential units.

The First Hill Public Realm Action Plan has been essential to the neighborhood’s success, as it manages this growth to become a denser, more walkable neighborhood. A collaboration between several stakeholders, including the Seattle Department of Transportation, Seattle Parks and Recreation, and the First Hill Improvement Association, the plan is a roadmap for leveraging roadways and public spaces to create a livable, walkable urban neighborhood.

Additionally, an array of public transportation options, which include a new light rail station in nearby Capitol Hill and Seattle’s streetcar system, have made the area more attractive to residents, visitors and businesses alike. 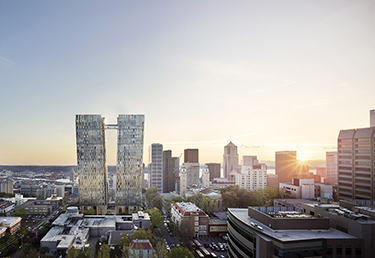 Institutional investment in First Hill is also foundational to its evolution. For decades, “Pill Hill” has been a hub of health care systems in Seattle, including Swedish First Hill Medical Center, Harborview Medical Center and Virginia Mason.

More recently, The Polyclinic and Kaiser Permanente have also built a significant presence in the area.

As Seattle continues to grow, there is strong demand for expanded and updated facilities to provide state-of-the-art care to a larger patient population. As a result, First Hill has been infused with institutional investment from health care systems and every one of the health care institutions mentioned above has either recently expanded or has plans to grow over the next five years.

On First Hill, institutional investment goes hand-in-hand with the development of the neighborhood’s long-standing artistic and cultural vibrance. For example, Swedish has plans to construct the First Hill Mile, an urban walking path intended to improve the health and pedestrian fabric of the First Hill neighborhood.

The new MoM gallery joins an array of diverse arts organizations on First Hill, including the Frye Art Museum, which is across the street from 707 Terry, a pair of 33-story residential towers designed by Perkins and Will and currently under construction. Reflecting its artistic neighbor, the project’s creative design consists of two towers that appear to lean away from each another, connected by a skybridge. Upon completion, the Frye Museum has the option to assume ownership of a select number of apartments, renting them to generate a sustainable source of income that will fund the institution’s operations.

In addition to this financial benefit, projects like 707 Terry also contribute to the neighborhood’s growth by drawing new people to First Hill. This residential boom is bringing energy and foot traffic to the neighborhood that builds on the institutional investment and arts and culture of First Hill, creating a virtuous cycle of continued growth. 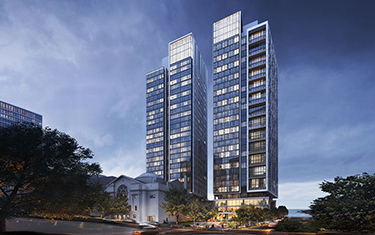 Another example of a public-private collaboration for the betterment of the neighborhood is Lennar’s development of two 32-story towers adjacent to Seattle’s beloved Town Hall venue. Designed by Perkins and Will and named Ovation Towers, the project is a nod to the historic event venue and will add 565 new residences, along with 8,400 square feet of retail, office and restaurant space, creating synergies with the recently renovated Town Hall.

As part of the development, Lennar is also building a park that adjoins a new lower level of performance space in the recently renovated Town Hall, allowing patrons to spill out into the newly created extended event space and public park amenity.

First Hill has long been one of Seattle’s most distinct neighborhoods, influenced by both its proximity and separation from the downtown core. While change is constant, so is the area’s commitment to livability, creating new public amenities and advocating for neighborhood improvements as a component to new development. As public planning, investment and residential growth continue to converge in the area, First Hill will transform further into a commercial and cultural hub. The next chapter for Seattle’s oldest neighborhood looks full of hope.

Brad Hinthorne is a principal at the global architecture firm Perkins and Will. A graduate of the University of Washington, Hinthorne is based in the Seattle studio, where he leads a diverse portfolio of public and private sector projects including health care, higher education, mixed-use, multifamily, civic and commercial.