A radical rebalancing of the urban environment

For months, cities across the country have been ceding car lanes to pedestrians and cyclists. These changes, born out of a global pandemic and plunging vehicle miles driven, are demonstrating the wide appeal for recalibrating the nation’s urban streets. So, what comes next for our street realm and how might we harness the momentum gained during these uncertain times?

The existential question embodied in the axiom, “If you build it, they will come…” is who are “they?” As we imagine a future, or for that matter a present, where cars relinquish their claim on street space to pedestrians eager to enjoy an enhanced public realm, what contributions might reclaimed streets make to further the goal of a diverse, equitable and inclusive society?

The answer lies not solely in the physical nature of converted infrastructure, but rather in the thought and intention given to programing, promoting and activating such places so that they welcome and invite diverse groups of users. One of the best examples of diverse groups sharing reclaimed streets can be found in the heart of the downtown Detroit, where Mayor Mike Duggan’s insistence that the city’s amenities — both old and new — exist for “all Detroiters” to enjoy freely.

The success of these reimagined street spaces illustrates the importance of understanding the world view of constituents, particularly those from disinvested neighborhoods, who may view such “improvements” to the public realm as suspect, wondering for whom they are intended. 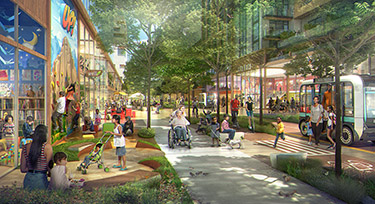 Images courtesy of ZGF [enlarge]
Reimagined street spaces are a vital component of our public realm and reflection of our community and common aspirations.

But with the proper outreach and engagement throughout the planning and design process, the public can first participate in determining the appropriateness of converting streets to pedestrian amenities, and then help to inform the shape and use of such projects. Conducting meaningful participatory processes, whether at the neighborhood scale or in the heart of cities, enables end users to ultimately take pride and ownership over the finished product, while minimizing potential misunderstandings and unforeseen consequences that might threaten desired outcomes.

One of the authors of this piece, Steven Lewis, previously served as the urban design director for central Detroit. A key responsibility was to work with civic leaders, business owners and residents, and to act as an honest broker to balance long-awaited reinvestment into a city deprived of public benefits for decades with the fear among longtime residents that any improvements would signal the beginnings of gentrification and displacement.

Since departing Detroit to join ZGF, Lewis’s interest in facilitating discussions with stakeholders around the benefits of improving streets to enable and enhance pedestrian connections within districts and between communities continues with work in Birmingham, Alabama. In collaboration with colleague and co-author Jerome Unterreiner, they are working on ways to unlock the development potential in the neighborhood where the historic Sloss Furnaces sit, currently isolated by railroad tracks and streets devoid of sidewalks.

The proposed design consists of a series of modest improvements to the primary street leading into the district, which if executed will better enable pedestrians to make clear and safe connections to assets within the district as well as neighboring communities, admittedly without eliminating cars in the short term.

Reimagined street spaces are a vital component of our public realm and reflection of our community and common aspirations. How can the invitation to participate in planning processes continue to increase ownership and embody the community voices and desired agency for a more just change? The timing of this question intersects with transformational shifts in urban infrastructure that might unlock untraditional opportunities to expand and redefine the canvas.

Two of those transformational shifts are the emergence of new mobility — in the form of autonomous vehicles — and the recognition that, as the Robert Wood Johnson Foundation puts it: “Building a healthier America will hinge largely on what we do outside of the healthcare system.”

First, the opportunities that autonomous vehicles offer extend beyond the mobility proposition. The fact they are not driven by humans and operate with a variety of sensors and navigational systems may allow the demise of the curbs, traffic signals, signs and most importantly the asphalt rivers that separate us. They can allow us to unlock the block and connect buildings across the street.

Instead of long, narrow strips of sidewalks squeezed up against the building’s edges, streets became a series of places for people to walk and bike through, with AV shuttles gliding along safely. This is currently addressed in the National Association of City Transportation Officials’ Blueprint for Autonomous Urbanism. It proposes that in the streets of tomorrow, people rule the road, advocating for mid-block crossings and more space dedicated to pedestrians.

Wellness and the streetscape

The second benefit is the health proposition. Instead of focusing most of our investments in the treatment of disease, we have an opportunity to shift the investment to the longer arc of health outcomes embedded in lifestyle: housing, food, streets and open space. The streets-and-open-space proposition is not just about getting outside, but feeling safe outside. If street design is integrated with the indoor experience, perhaps we can create a more just public realm, reflecting economic and social diversity of our cities invites all to linger in the space between. AVs can free up street space for people. If we can move more freely on some streets, and we can cross more frequently at midblock crossings, maybe jaywalking will disappear from our language.

Once outside, we can nurture a sense of place in support of good health with sensory enrichment. Light pollution is eliminated because smart vehicles don’t need it, leaving lower-level pedestrian lighting to support a circadian street and rhythms. Electric vehicles are quieter. Replacing horns and engine noise with birdsong and human conversation reduces decibel levels to those of a park. Fresher air is in abundance with the expansion of trees and elimination of fossil-fuel producing cars. Cooler environments prevail with more tree cover and permeable surfaces that also filter stormwater. Finally, walkability and human-powered mobility takes a front seat to car infrastructure.

As we continue to rethink this community canvas or public realm, what can we do to create a proposition that posits the lowest price of admission for a life of health and happiness? And more importantly, how can we support emerging voices and the younger generations who will guide the future?

R. Steven Lewis is a principal urban designer at ZGF Architects. Prior to ZGF, he was design director for the Central Region of Detroit’s Department of Planning and Development. Jerome Unterreiner is a principal urban designer for the Seattle office of ZGF, and has worked on district planning across the U.S., including Portland’s Pearl District, Seattle’s South Lake Union and Seattle’s Stadium district, as well as for the Portland Streetcar and light rail systems.