Over the past few development cycles, the region’s urban communities — notably downtown Seattle and Bellevue — have continued a path toward rapid densification. As employment rises in the core, so does the need for housing, multi-modal transit and other fundamental elements supporting urban growth.

The evidence is everywhere: Our downtown communities rank near the top of all U.S. cities in the number of tower cranes on major construction sites. Developers and their partners are delivering a range of project types to meet demand from urban residents, large-scale office users, health, education and research organizations, retailers and hospitality operators, among others. And while the coronavirus has impacted the projected pace of some downtown development, there’s reason to believe that Seattle and Bellevue remain healthy targets for domestic and global investors. The area’s overall desirability, in addition to its ability to adapt to the “new normal,” has given further strength to the local residential market. 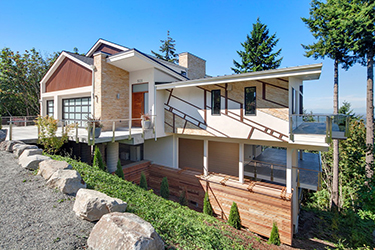 Photos courtesy of GIS [enlarge]
The Alta Vista project in Bellevue presented GIS with the opportunity to deliver a contemporary single-family home.

It’s part of an urban-evolution process that Forbes recently described as Seattle’s march toward legacy city status — increasing density in the core to “accommodate the inward flow of jobs and employees” from major companies like Amazon. This growth is helping Seattle and other West Coast cities, as well as Denver and Miami, to join the list of long-time legacy markets such as New York, Boston and D.C. — largely densified prior to World War II.

But this region is different than most other emerging cities, due to the extreme geographic constraints presented by Puget Sound and various lakes, and mountain ranges that encircle our urban development zones. The result of these natural surroundings — as well as record-setting growth that absorbed most of the developable land — is a limited number of parcels that offer a relatively clear path for development. What’s left are mostly challenging sites defined by small, tight urban footprints, steep slopes and environmental sensitivities requiring massive clean-up or other resource-consuming mitigation.

Not all is lost, however. The region’s meteoric growth has required real estate developers to become more adept at identifying projects that pencil. Perhaps more importantly, recent cycles have provided opportunities for real estate companies to refine their capabilities in developing sites that pose financial and logistical obstacles.

Since being founded in 1992, Redmond-based GIS International Group has specialized in creating iconic structures — multifamily, mixed-use and single-family properties — on highly complex urban parcels. The company provides turnkey real estate solutions for its clients and project partners, and has led several area projects posing a variety of development and construction challenges.

Delivered in 2017, Park 12 is a townhome community near the fast-evolving Bellevue’s Spring District, just minutes from the core. The project includes 12 homes nestled adjacent to a private, protected green park space and Kelsey Creek running through the site.

Given its proximity to sensitive wetlands, Park 12 required significant improvements to the site, including the restoration of a portion of Kelsey Creek, which flows into the Mercer Slough and serves as a migratory stream for coho, sockeye and chinook salmon, as well as steelhead trout. In unprecedented fashion, the neighborhood rallied around the plan to develop this former dump site. Additionally, the park is comprised of nursed fallen trees, all of which were replaced by plantings — many of which serve at-risk birds, bats and bees — creating a truly sustainable habitat and a lovely place for families to frolic.

The GIS team — which also included SkB Architects, structural partner Grid Engineers, civil firm CSP Engineering and landscape architect GCH — cleaned up the site and removed invasive species to attract native habitat. GIS also took great care to protect the natural environment by reestablishing native plantings and installing birdhouses, bat boxes and beehives. The environmental elements of the project provided both a challenge and opportunity for development, as the park space acts as a private wildlife conservation area and is safeguarded from future development through a native growth protection easement.

Despite its exceptional location, many developers passed on the property prior to GIS’s acquisition of the land in 2015, due to the site’s critical-area status, proximity to Kelsey Creek and tough-to-build-on soil conditions. 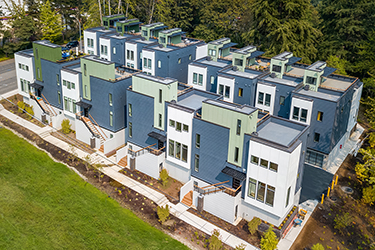 [enlarge]
Park 12 is a townhome community near the fast-evolving Spring District in Bellevue.

Once planned as the European Tower project — a one-home, one-floor Euro-inspired pencil tower in the heart of downtown Bellevue — the GIS Plaza site is now moving forward as a six-story boutique building featuring 16 custom residences, a luxurious office space and boutique retail space all totaling nearly 32,000 square feet. The property, which recently broke ground, required GIS to bring a host of innovative design and construction solutions given the site’s extreme space constraints. The quarter-block parcel is located steps away from the public library, Ashwood Park and Bellevue’s urban core.

The site’s small 5,682-square-foot footprint — more commonly found in older U.S. cities and markets throughout Europe and Asia — does not provide ample space for traditional subterranean parking. Instead, GIS and design partner SkB Architects planned a fully mechanical parking system, the first of its kind in Bellevue. The technologically advanced system will provide for 21 stalls in a footprint that normally would accommodate only seven vehicles. In addition, the compact site required GIS to employ a highly efficient construction plan that accommodates the project’s adjacent neighbors and minimizes impact on Bellevue’s road and foot traffic.

True to its name, the Alta Vista project in Bellevue presented GIS with the opportunity to deliver a contemporary single-family home that combines state-of-the-art technology with unspoiled natural surroundings — punctuated by panoramic views of both CBDs, Lake Washington, Puget Sound and the Olympic Mountain Range. The property’s steep slope, as well as its sensitive environmental surroundings, caused other homebuilders to pass on the site before GIS purchased the lot in 2014.

Due to its unique location — the land literally drops straight down, at 100% slope, towards the property’s western edge — Alta Vista required a massive engineering effort to structurally secure its four floors and 6,639 square feet of residential space. Engineering techniques employed by GIS and its project partners included cutting a road into the hillside to accommodate a massive drilling rig that installed 29 auger-cast pilings, some of which were up to 75 feet long. The pilings retain the road and hillside, as well as give the home its stability, since they rest on rock. In addition, the driveway served as a bridge that floats over the steep slope between 145th Avenue Southeast and the home.

The single-family residence was marketed to tech-savvy buyers due to its private, secluded location and wide range of innovative features controlled via a smartphone, tablet and Amazon Alexa — all resulting in on-demand state-of-the-art surveillance, one-touch mood-setting, multiple climate zones, an elevator, central IT control and Sonos sound throughout.