On the Block: SLI finally breaks ground on 15-story ‘kit of parts' tower in Belltown

Demolition was completed in January of last year at 303 Battery St. The little old office building was razed for a planned new 15-story, 112-unit apartment tower on the corner of Third Avenue. The Belltown site was fenced, but nothing much happened for most of last year.

Why the delay? In a word, “The pandemic,” says Arlan Collins, who co-founded Sustainable Living Innovations with Mark Woerman over a decade ago. (The firm, now with about 58 people on staff, is entirely separate from the larger CollinsWoerman, though they share the same downtown office building.) 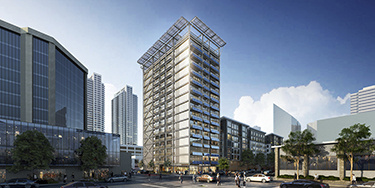 [enlarge]
It will be SLI’s second building and first development with related arm Sustainable Living Partners.

[enlarge]
Panels are stacked up to go in the Tacoma factory.

SLI's Tacoma factory was up and running in late 2019, with the final Belltown permits near, when everything had to shut down last year along with other businesses statewide.

But at last, owner/developer and builder SLI will officially break ground today. Expected to attend the ceremony with Collins and others are Seattle Mayor Jenny Durkan and King County Executive Dow Constantine.

SLI says the project will be the world's first net zero energy apartment tower. It'll also be SLI's second building and first development with related arm Sustainable Living Partners (more on that below). More multifamily projects, here and in California, are in the pipeline.

SLI uses its proprietary “kit of parts” method of construction, in which factory-made components (or panels) are trucked to the job site like flat-pack Ikea furniture. Then they're assembled and craned into place within the steel exoskeleton rising around it. (Don't call it modular! That's tacky.)

The 303 Battery pit was recently excavated, with concrete poured and a tower crane base installed. In Tacoma, “We've completed close to 900 panels,” says Collins. Each apartment, depending on its size, required eight to nine panels on average. Think: walls, floor, ceiling, etc. — all with the wiring, radiant heating elements and plumbing already in place.

The latter said in its 2019 sustainability report that it was backing SLP and arranging the loan for 303 Battery. SLI's website also lists MultiGreen, Moss Construction and Hunt Cos. as owners or investors. All have a vested interest in using SLI's patented methods on its future multifamily projects.

By participating in the city's Living Building Pilot Program, 303 Battery will gain extra floor area for various green features. Those include 622 solar panels (all made in the U.S., stacked up and waiting in Tacoma), radiant heat flooring, waste heat recovery, regenerative elevator brakes, water recycling, automatic window blinds, graywater recovery/treatment, high-performance glass and cooling by natural ventilation. The developer says the building will be 100% powered by electricity.

Such efficiency is lauded on Renova's website, which states: “By converting over 80% of a building's cost into installed SLI components, and then shrinking the SLI supply chain into direct relationships with manufacturers and installers, SLP delivers a lower-risk, higher-quality asset at a significantly lower cost. Buildings that are built with the SLI System cost at least 10% less to build than comparable conventional buildings, perform with 20% to 30% lower [operations and maintenance] expense, and can be built on ‘orphan' lots — small lots that are difficult to develop economically with conventional buildings.”

Renova, based in Denver, had past experience with solar power before joining SLP in 2018. “Renova's job was to raise the capital,” says Collins, without specifying how much has been raised to date. That early funding will allow SLI to scale up its platform into a national, replicable business. SLI and SLP will likely merge into a new entity, says Collins, with essentially the same name. “We will seek more capital."

Units at 303 Battery will run from studios to two-bedrooms, ranging from 444 to 898 square feet. Each will be identical within a given stack. To meet Mandatory Housing Affordability requirements, 27 units will be affordable. Some will have small balconies. There will be no parking, but tenants will have 100 bike stalls. They'll also have a roof deck with about 1,470 square feet, with views peering out from beneath the tower's crown of solar panels — which extend beyond the property line.

Other solar panels will adorn the balcony railings and the building's south side. SLI also promises an app for tenants to control their blinds, thermostats, etc. via phone or mobile device. Harvesting all that data, in a very wired building, will also help SLI to refine its modular platform.

About 2,000 square feet of retail/commercial space is planned in a corner bay. The property traded into the new ownership in 2019 for $5.8 million. Total project cost hasn't been disclosed.

Construction at 303 Battery is expected to last about 10 months. On a daily basis, passersby “will see panels and steel going up every day” in a parallel process, says Collins. The first panels should start arriving in August, with the crane in place later this month. SLI hopes to complete the project by July of next year.

SLI's next two projects, both low-rise, will probably be 125 units for Downtown Emergency Service Center near Green Lake (on Aurora); and 120 units for Chief Seattle Club in Lake City. SLI will be the developer and general contractor, and Absher will be a construction partner.

Those will help keep the Tacoma factory in continuous production, as is the goal. “We employ about 35 people down there,” says Collins. They're non-union workers, who he says are drawn from underemployed sectors like veterans, former offenders and formerly homeless folks. “We've made it a point to bring in the less fortunate.” Indeed lists those jobs at $18 to $20 per hour.

The panels will likely then be replicated at local factories in Los Angeles and in the Bay Area. The latter project, with Equity Residential, is a 10-story building in Daly City (a little south of San Francisco). Collins explains that panels will be tailored for three lines of business: low-rise, midrise and medium-to-high buildings. Hotels might one day be added to the product line.

The panels must naturally meet local building codes. “They're designed to get wet,” says Collins. “There's no drywall, no carpet, no paint” and no VOC-emitting materials. The factories, here and in California, don't require a lot of space. The Tacoma plant has about 194,000 square feet. “It's more assembly than manufacturing,” says Collins. “It's very low-tech.”

After the two North Seattle projects will likely be a new apartment building at Yesler Terrace. That looks to have about 18 stories above the concrete podium/garage (on a sloping site), with 376 units — 96 of them affordable for those earning 80% of area median income. Collins expects that to enter design review this fall, with the land sale by year's end.

There's no schedule for the 18-story, 394-unit building planned on the Mercer Mega Block, for Alexandria Real Estate Equities. “There was a gas station there,” says Collins, meaning it's polluted. Alexandria will have to do the cleanup first, though the building has been through a few rounds of design review. Alexandria's offices will likely go first.

A 21-story, 176-unit First Hill plan is “on the back burner,” says Collins, which also seems the case for high rise once contemplated in the Denny Triangle. (SLI doesn't own either property.)

SLI's first proof of concept was the 47 + 7 building in the U District, with six stories and 24 units. It was completed circa 2015, then sold for $8.8 million, before Renova joined forces in the new venture. SLI itself has roots going back to 2008, as CollinsWoerman was seeking to diversity, and lower building costs, during the slowdown following the great recession.