Real Estate Buzz: Talk in real estate these days is all TOD

Three letters — TOD — are re-shaping how a lot of people think about real estate today.

TOD stands for transit-oriented development and it means creating jobs and housing in places that are well served by transit. We are seeing the “T,” with Sound Transit's light rail line from downtown to Sea-Tac, and more lines are set to open in the next decade.

Now city and regional officials are trying to encourage the “D” around new and existing light rail stations.

Nine teams of developers — both local and national — are vying for a chance to build around the Capitol Hill station, which opens in 2016. A minimum of 397 apartments could be built on four sites on or near Broadway, between East John Street and Seattle Central College. At least 36 percent of the units must be reserved for lower income people.

Construction won't begin until after the station is done. Proposals are due in October, and Sound Transit said it wants to announce the winners by the end of the year.

The Spring District in Bellevue is another crucial TOD opportunity. Wright Runstad & Co. and Shorenstein Properties want to build more than 5.3 million square feet of office space, housing, retail and entertainment on 36 acres around a future light rail station in the Bel-Red corridor.

NAIOP held a panel discussion in Seattle yesterday to look at the impact TOD is having on real estate and this region.

The 18-to-34-year-old Gen Y/millennials have shown a reluctance to hop in a car (or even buy a car) and drive 30-plus minutes to work. They are choosing instead to live in places where they can walk or take transit.

One of the panelists, Clyde Holland of Holland Partner Group, said, “The cities of tomorrow and employees of tomorrow have no interest in commuting. Gen Y figured out it wants to live, work and play all in their own neighborhoods.” 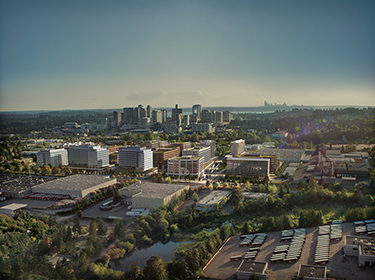 Image by Studio 216 [enlarge]
The Spring District will have more than 5.3 million square feet of office space, housing, retail and entertainment on 36 acres around a future light rail station in the Bel-Red corridor.

Holland is doing TOD projects in Seattle, Portland and Denver, building high rises with a goal of helping to create a critical mass that will support good transit and ground-floor retail.

One of Holland's biggest Seattle projects is a 40-story apartment tower at 815 Pine St., across from Convention Place station and a few blocks from Westlake station. The tower is set to open in November.

Another panelist, former Seattle City Councilmember Richard Conlin, said successful TODs require vision from the city and energy from the community. For example, a neighborhood group called Capitol Hill Champion is insisting that there be space above the light rail station for the farmers market. Conlin said this kind of input can make a TOD project better.

Conlin said planning for TODs on Capitol Hill can be a good model for others. He said any conversation about development should also focus on transit.

“Transportation and land use are two sides of the same coin, and they don't make sense without each other,” Conlin said.

Portland-based Gerding Edlen is one of nine teams on the short list to develop around the Capitol Hill station. Jill Sherman of Gerding Edlen was on the panel, and said cities and developers are not the only ones interested in TOD. Gerding Edlen has raised more than $400 million from institutional investors for doing transit-oriented, mixed-use projects.

Gerding Edlen wants to develop all four parcels near the Capitol Hill station. Sherman said having a single team do all the sites could allow some efficiencies such as shared parking and centralized energy systems.

“There are a lot of benefits to the development from looking at it comprehensively and holistically,” she said.

Offices with different types of places to work make people happier, according to a new report from CBRE.

People work differently today, with fewer parked all day at a desk in a large office. The study says employees spend less than half their day at a desk. More time is spent interacting with others, either in a room face to face or video chatting with someone halfway around the world.

“Collectively, this data suggests that organizations that can provide flexibility and choice will create greater office efficiencies and higher levels of employee satisfaction,” said Lenny Beaudoin, senior managing director of workplace strategy for CBRE. “By more intensely using their real estate assets, companies are able to reinvest in technology and a suite of services that can make the new workplace environment a reality for their employees.”

Offices with open layouts and amenities are a big draw for tech companies, and other fields are adopting their model. In the past, many decisions about office space were made based on cost, but now the main focus is attracting and retaining talented people, so it helps to keep them happy.

How's your new apartment working out?

Technology has armed people looking for apartments with a lot more information about their choices.

A new website called addressreport.com lets renters see detailed reports about a specific address in numerous cities across the country, including Seattle and Tacoma.

The goal is to “prevent mover's remorse” by giving people information about such things as complaints made about a building, crime, trees per block, demographics of the area and how long you will wait for an elevator.

Jason Cunningham of real estate brokerage Douglas Elliman said in a press release about the site: “It's an intuitive and beautiful tool to look up any property and answer, in seconds, almost any question a client could throw at you.”