Real Estate Buzz: Smith Tower is about to get a new owner

Word on the street is that Unico Properties is buying the 42-story Smith Tower, which recently celebrated its 100th birthday. A Unico spokeswoman said the company would not comment until the sale has closed.

CBRE Capital Partners acquired the debt on the tower at 506 Second Ave., and then bought it in March 2012 for $36.8 million at a foreclosure auction. The CBRE group joined with Goodman Real Estate to manage the property.

The current owners have done some renovation such as upgrading the observation deck and adding a management office, conference room, bike storage, and a new gym with showers and locker rooms.

“It's obviously a historic, classic building we have been able to modernize to make sure it has that good combination of new and old feel for the tenants, and they love that,” said Nick Carkonen of CBRE. He is the leasing broker for Smith Tower, along with Cavan O'Keefe and Nate Fliflet. 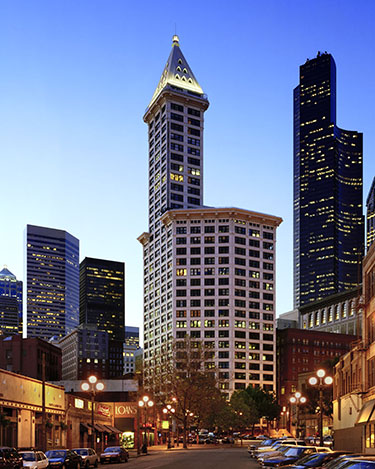 Courtesy CBRE [enlarge]
The 42-story Smith Tower was built in 1914 and for decades was the tallest building west of the Mississippi.

When the CBRE group took over Carkonen said the 257,000-square-foot building only had six tenants. Carkonen said his team has completed more than 40 leases, and now the occupancy is about 80 percent.

Smith Tower's tenants are mostly tech, media, marketing and architecture companies, though there are still some law firms.

Dan Dahl, a senior vice president at Colliers International who is not involved in the deal, said a building like Smith Tower that has space available is attractive to investors who want to get in on a market “that is improving so dramatically.” When rents are rising, empty space could be more valuable than full space with lower rents, Dahl said.

Eight years ago Walton Street Capital paid $44 million for Smith Tower — and a neighboring two-story building — knowing the tower could lose two key tenants, and it did. Walton Street planned to convert the tower to residential condos, but that fell through when the economy tanked during the recession.

Walton Street tried unsuccessfully to land a large tenant, and defaulted on the loan in 2011.

Smith Tower was the tallest building on the West Coast until the Space Needle was erected in 1962. It cost $1.5 million to build and was named for New York tycoon Lyman Cornelius Smith, who in 1914 owned $4 million worth of property in Seattle.

Construction of the tower required 8 million pounds of steel, 67,735 square feet of glass, 47,800 barrels of cement, 1.5 million bricks and 1.5 million feet of lumber, according to a press release announcing the building's 100th birthday.

Unico has been active in Pioneer Square. Last week it paid Goodman $26.6 million for three buildings on the east side of First Avenue South between south Washington and Main streets. That purchase included the Grand Central Building and two smaller structures: the Buttnick and City Loan buildings.

He spoke at a Urban Land Institute event Tuesday.

Amazon spent another $259 million over the last two years buying four blocks in the Denny Triangle, and has started to build a high-rise campus that could have more than 4 million square feet.

Along the way, Amazon has gobbled up just about every available square foot of office space in and around South Lake Union.

Despite its size and rapid growth, Schoettler said Amazon still wants to operate like a startup. With such a sprawling campus, it would be very easy for employees on different teams to never see each other. Lately Amazon has focused on creating “centers of energy,” which are places that employees must pass through to get somewhere else. These places lead to chance meetings and conversations that result in collaboration, Schoettler said.

The developer of a six-story hotel in Northgate said construction is set to begin next spring.

Gramor Development Washington is the Seattle-based owner and developer of the 168-room Hampton Inn & Suites at 9550 First Ave. N.E. The hotel is expected to open by the summer of 2016.

Gramor got design approval from the city on Monday.

The hotel will have 136 parking spaces on site and 15 shared spaces off site.

Jensen | Fey Architects of Redmond is the architect. Other team members include IDEA Interiors, Thomas Rengstorf & Associates and Blueline Group.

Cory Shelest, vice president at Gramor, said several hotel operators inquired about the site, which is near Interstate 5, Northgate Transit Center and the future site of Sound Transit's light rail station. The station will be near First Avenue Northeast and Northeast 103rd Street, and opens in 2021.

Gramor's website says it has developed, built and managed over 100 commercial and multifamily properties in the Pacific Northwest. Gramor is building a 64-unit mixed-use apartment building at 3601 Greenwood Ave. N., and recently completed projects on Queen Anne and Capitol Hill.