A report in the Denver Post said Galvanize, a Denver-based tech collaboration and education company, is leasing office space in the building, and local real estate sources say Galvanize will take it all. The Post report said Galvanize will have a soft opening in the first quarter of next year.

Brickman representatives declined to comment on the tenant and Galvanize did not return a request for comments.

This will be Galvanize's first office in the Seattle area. It has offices now in Denver and Boulder, and is opening next month in San Francisco. A second Denver office will open early next year.

Aaron Lazovik, vice president for Brickman, said Brickman bought the South Jackson building in 2007 through a fund with a life of seven to 10 years.

“Obviously we feel like we are capitalizing on a very improving market, and it just so happens to work out that this is a great time for us to sell,” Lazovik said.

The building was the headquarters of NBBJ until 2006 when the architecture firm moved to Alley24 in South Lake Union.

Stuart Williams, Lori Hill and David Otis of Jones Lang LaSalle are marketing the building for sale. Greg Inglin and David Abbott of Colliers International are the leasing brokers. 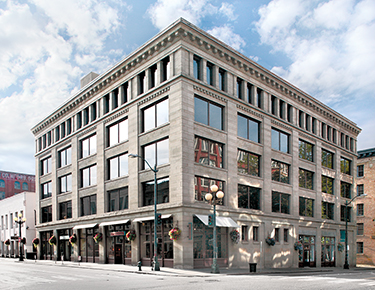 Photo courtesy of Brickman [enlarge]
Brickman is putting this office building at 111 S. Jackson St. on the market. It recently landed a Denver-based tech company called Galvanize as a tenant.

Brickman bought the building in December 2007 for $22.45 million. At the time, Microsoft had just announced it would have an office there and it remained a tenant until last year, Lazovik said.

Brickman renovated the building by upgrading the HVAC systems and the roof top amenity space as well as converting the basement into office space. Lazovik said work was done in phases and took about a year.

JPC Architects designed the renovation and Pennon Construction was the general contractor. MacDonald-Miller did the HVAC work.

Last month, Brickman paid more than $50 million for the Pacific Building, a 23-story office tower at 720 Third Ave. Lazovik said it was recently renovated, but Brickman plans to convert some of the floors to open layouts to attract tech and creative companies.

Lazovik said Brickman is high on Pioneer Square because of its historic charm, proximity to transportation and new development.

“It's a rising tide, and we believe in the immediate area,” he said.

With new projects popping out of the ground every day and construction cranes dotting the skyline, don't you often find yourself asking: What's THAT building?

Ethan Phelps-Goodman wanted to create an easy way to answer the question. He describes himself as an advocate of transparency in politics with a tech background, so he decided to build a map-based website that shows projects in Seattle using data from the city's Department of Planning and Development.

The site is called Seattle in Progress (http://www.seattleinprogress.com). It's a simple site. You can click a point on the map and see the latest plans, specifically design review packets that often show renderings and describe the scope of projects and members on the project team.

Phelps-Goodman has long been interested in housing and urban planning. He is from the San Francisco Bay Area, which he called “a shining example of how to do everything wrong” when it comes to planning a city. He watched as housing costs rose and the homeless population increased significantly.

These are issues Seattle faces too, and Phelps-Goodman said he believes the tech industry has a role to play in helping to build better cities.

Phelps-Goodman worked in Washington, D.C., focusing on the effect of money on politics, and he also spent a year at Facebook, but said he left in search of something more fulfilling.

He said websites like his could help create better conversations between citizens, city officials and developers.

Vocativ.com ranks Seattle as the seventh best U.S. city for people under 35.

Vocativ describes itself as “a new type of media company” that looks for “hidden perspectives, unheard voices and original ideas from around the world via the Deep Web.”

You can thank our strong economy and trendy restaurants for the high ranking. Seattle ranked third for food, trailing only Washington, D.C., and San Francisco. For jobs — calculated by median salary and employment growth — Seattle ranks 15th.

Some of the cities high on the list for adding jobs are no surprise — San Francisco, San Jose, Austin and Houston — but other cities that are adding jobs we don't hear about as much: Minneapolis, Raleigh, Lincoln, Madison and Oklahoma City.

Seattle did not rank high in demographics, which is ethnic diversity and percentage of singles. We were 97th out of 100 cities surveyed. Vocativ also dinged Seattle for high rents: we rank 83rd for housing.