Real Estate Buzz: There's a lot of buzz about the waterfront

Bertha is finally inching forward again, and the Buzz has noticed that the waterfront is, well, buzzing with development activity.

The latest new project has been in the making for decades. The long-time owners of the Commuter Building, a parking garage and parking lot at 815 Western Ave., are talking with the city about putting a 160-foot residential tower there.

Windermere founder John W Jacobi, his son OB Jacobi, and his daughter Jill Jacobi Wood are the managers of Commuter Center LLC, which owns the block. Greg Gustafson, also of Windermere, manages the building. He said the project has no connection to Windermere.

The owners have not decided exactly what they want to do yet, Gustafson said, but they could build about 160 units with ground floor retail. Some housing units could possibly be for-sale condos.

Olson Kundig is the architect. A presubmittal conference with the city is set for later this month.

City of Seattle/James Corner Field Operations [enlarge]
Removing the Alaskan Way Viaduct will create a new neighborhood along the Seattle waterfront, and a lot of developers and property owners are getting ready.

The owners have no plans for selling the property.

The garage has been closed for about a year, Gustafson said, because Bertha the tunneling machine must drill underneath it. The garage is tough to navigate, and he said the only way it could be used is by renting it to a valet parking company.

“In our opinion, the property is at the end of its useful life as it is now,” Gustafson said. “With the (Alaskan Way) Viaduct coming down, we are going to be under a transition period, and we are looking at what to do next.”

The owners have not decided when they want to start construction but their schedule isn't dependent on the viaduct coming down.

There's a lot of a new interest in the waterfront as the city continues working on a plan to remake 26 blocks between Pioneer Square and Belltown, with open space, streets, utilities and connections to downtown.

Here are some of the private real estate projects along the waterfront:

• Just a block north of Commuter Center, Beacon Capital Partners wants to add two stories of office space and six stories of housing to the Maritime Building at 911 Western Ave. NBBJ is the architect. An early design guidance meeting was earlier this week.

• Mack Urban is constructing Cyrene, a 16-story, 160-unit apartment project at 50 University St. Mack Urban previously called it the first project to come out of the ground under the waterfront redesign plan. The team is Ankrom Moisan Architects and Exxel Pacific.

• Gerding Edlen had planned to start an 11-story apartment project at 316 Alaskan Way S. last year but approvals from the departments of Planning and Development and Neighborhoods were appealed to the city hearing examiner, with a hearing set for Jan. 20 through Jan. 22. A joint venture between Weber Thompson and GBD Architects are designing it, and Lease Crutcher Lewis is the general contractor. 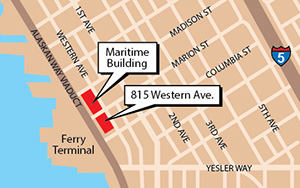 • At 2134 Western Ave. a San Francisco-based firm called JDA West is planning an eight-story, mixed-use project with 152 apartments and 5,700 square feet of retail. Clark Design Group is the architect.

• Goodman Real Estate, which developed The Post at 888 Western Ave., is constructing a 45-unit building at 80 S. Main St. Clark Design Group is the architect and Venture General Contracting is the general contractor.

• Many of the projects proposed along the waterfront are housing, but some contain office space and other uses. Hudson Pacific Properties wants to build an eight-story building with 167,000 square feet of office space and 7,200 square feet of retail at 450 Alaskan Way S. The building is expected to open in the third quarter of 2017, according to Hudson Pacific's website.

• AIA Seattle, Seattle Architecture Foundation, Design in Public and AIA Washington Council, plan to move into a 4,500-square-foot space in the National Building at 1010 Western Ave. this month. The project is called Center for Architecture & Design, and it will give the organizations greater public presence and allow them to offer public programs on urban themes. Suyama Peterson Deguchi is designing the tenant improvements; Krekow Jennings is the general contractor; and OAC Services is project manager.

• The Pike Place Market Preservation & Development Authority is underway on the $73 million MarketFront expansion of Pike Place Market. The complex is scheduled to open in 2017, with 40 housing units for low-income seniors, social service space, 300 underground parking spaces, 12,000 square feet of restaurant/shop space, 33 bike parking spots and a grand pedestrian connection to the waterfront called Overlook Walk. The Miller Hull Partnership is the architect, and Sellen Construction Co. is the general contractor.

• The Seattle Aquarium recently got the master plan for a $100 million expansion approved by City Council so design work can begin. Construction hasn't been scheduled, but the DJC previously reported it could begin in 2019. EHDD of San Francisco and Thinc of New York did the master plan.

Did we forget anyone?

Marshall Foster, director of the city's Office of the Waterfront, said design of the $712 million waterfront redesign is nearly 60 percent done. Most of the major elements have been designed, and now the team is figuring out materials, utilities and other technical details.

“We have a very clear vision that hasn't changed,” Foster said. “What we are doing now is fleshing that out and preparing to build it.”

Final design on the waterfront is set to begin in 2017 and should take about 18 months, Foster said. After that the city will start seeking contractors for projects.

Once the seawall and Bertha are done — likely in 2018 — the viaduct can come down, which should take about six to nine months, Foster said. Then the city can get to work on its waterfront projects, probably in early 2019.

The city also needs to secure about $300 million in funding. About $100 million of that will come from philanthropy and nearly $200 million will be funded by a local improvement district. Foster said the city has been working with the business community on the LID, and the process for forming it should begin in late 2017 or early 2018.

When it comes to private development along the waterfront, Foster said he wants to see “active buildings,” meaning no blank walls or exposed parking. He wants developers to really focus on the ground floor.

The city plans to help developers find the best retailers, and Foster said he would like to see cafes and restaurants reuse some of the loading docks in existing structures.