On the Block: Fast ferry could turn Bremerton into Brooklyn

Sound Transit 3 isn't the only measure on the Nov. 8 ballot that could have a big impact on real estate. Here on the east side of Puget Sound, shrewd developers are studying the map for a possible light rail expansion to West Seattle, Ballard, Lynnwood, Issaquah and beyond. Red circles are being inked, property owners are being contacted, handshake deals are being made. This is where we want to build.

“But wait,” a faint voice cries from west across the waters. “What about Kitsap?”

What indeed? Thirteen years after the state ended fast-ferry service between Bremerton and downtown Seattle, Kitsap Transit is asking county voters to approve a 0.3 percent sales-tax increase to revive that route next July. It would initially use an existing boat, the 118-passenger, Bellingham-built Rich Passage I, which the agency purchased for $5.4 million and is now testing on the Bremerton-to-Port Orchard run. 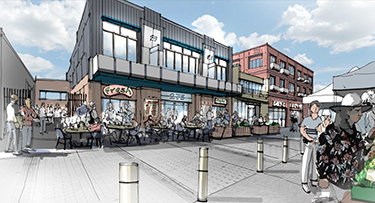 Courtesy Rice Fergus Miller [enlarge]
Wes Larson of Sound West Group has bought a half dozen properties along Fourth Street that he plans to redevelop, and other developers are in the mix.

With a startup cost of $48 million (44 percent funded by sales tax, 56 percent by grants), Kitsap Transit would build a fleet of five more fast ferries to link Seattle to Kingston (in 2018) and Southworth (in 2020).

Bainbridge already has the shortest current ferry route, at about 30 minutes, and isn't part of the fast-ferry plan.

The Bremerton run would be trimmed from one hour to 28 minutes, so property owners and developers are taking note. Just as our waterfront has become a hot market with the anticipated viaduct removal, downtown Bremerton could soon become an affordable commuter suburb that links nicely to our shore.

Washington State Ferries hopes to have the new Colman Dock done by 2023, by which time — knock wood — the Alaskan Way Viaduct will be gone and the waterfront transformed. By then, too, the City Connector streetcar will be running on First Avenue. And light rail will reach Northgate and Bellevue.

Given those transit links and Seattle's booming economy, Cary Bozeman, Bremerton's chief booster and former mayor (from 2002-09) is even more optimistic than usual.

“In the last 20 years, it's the best opportunity I've seen in Bremerton to attract new, younger, educated families,” says Bozeman, currently a Port of Bremerton commissioner. “It's driven by the cost of Seattle, obviously. Anybody who's developing [in downtown Bremerton] is talking about housing. I don't think we're seeing a bubble.”

When the state ran the fast-ferry service from 1998-2003, Bozeman recalls, “We saw big blip in real estate values.” Several downtown Bremerton projects were announced, but then came the recession, and most of those plans foundered.

Most notable was Ron Sher, the veteran developer of Third Place Books, and malls at Lake Forest Park and Crossroads. In 2007, he bought the former J.C. Penney building in Bremerton, then a parking garage, for $8 million. With Bozeman and others cheering him on, he announced the mixed-use Harborside Commons the following year — just in time for the recession.

Eight years later, the building is still a parking garage, though rumors continue to swirl about it. (Sher didn't return calls for comment.) Sher did create the Bremerton Bar & Grill on a nearby property he bought, but otherwise has little to show for his investments.

Managing those properties is broker and consultant Chuck Henderson, a Bremerton native who returned to the city a dozen years ago. Since the recession, he sees Bremerton clawing its way back toward prosperity. 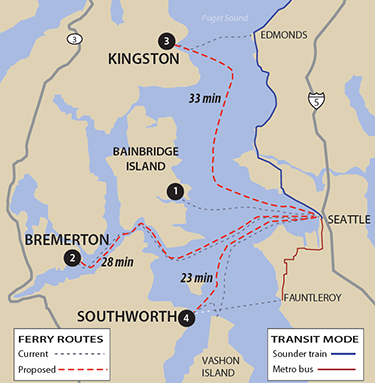 Courtesy of Kitsap Couty
These are the fast ferry routes on the Nov. 8 ballot in Kitsap County.

“It's always slightly behind,” Henderson says. “Just about every street in town has some action on it. Now outside investors are starting to come in.” And, crucial to attracting more multifamily development, “We're working very heavily on bringing a grocer to downtown.”

Of Sher's Penny's garage, says Henderson, “It'll always have parking, but it's the linchpin.” He thinks the financing climate is right for such mixed-use redevelopment, “now that Bremerton's starting to prove itself” with other current projects.

“There's a lot more activity,” says developer Wes Larson of Sound West Group “It's all been good news here.” His 80-unit Spyglass Hill project opens next month and is 30 percent leased. It will be a five-minute walk to the ferry terminal.

Larson also points to Apartment Insights' third-quarter report on the Kitsap rental market, which shows average rents increasing to $1,186 per month, up 12 percent from last year. The city of Bremerton lists about 800 housing units in the pipeline — including Spyglass Hill and Larson's planned 707 Pacific lofts.

Also on that list is the revitalization a number of properties along Fourth Street, where Larson's Roxy Theater is expected to reopen as a movie house. (Larson tentatively calls his project Quincy Square, to honor erstwhile Bremerton resident Quincy Jones.)

That area “has been dead for the last 30 years,” says Larson, who today foresees a renaissance for Bremerton. The naval shipyard has added 5,000 jobs in recent years, he says.

Citing the resurgence of New York City's passenger ferries, he says, “I call Bremerton Seattle's Brooklyn. It's becoming a hip and cool and funky place.” On weekends, “I've had to stand in line to get into bars.”

Larson has bought a half dozen properties for the Fourth Street redevelopment, and other developers are in the mix. Yet the post-recession days of bargain shopping may be over, says Henderson, who long ago worked as a paperboy and “delivered to all those buildings that are now vacant.” If he's right about the economic climate, many of those buildings will soon have retail below and housing above.

Who will live there? Foot commuters making transit connections in Seattle?

“It happened in Bellevue,” says Bozeman, who should know: He was mayor of that city from 1987-93, and a city council member before that. “I think we're gonna see a bunch more commuters.”

Another point to remember: When the state's fast-ferry service ended, car sharing services like Car2Go and ReachNow didn't even exist in Seattle. Nor did Uber and Lyft. Nor did smartphones. Technology may be the Bremerton commuter's best friend.