On the Block: Relax. Waterfront redesign is going fine

After some two years of delays, Bertha's drilling is going — dare we say it? — relatively well. The deep-bore tunnel is at or near the midway mark as I write this. And while no government official or project partner will say as much, the Alaskan Way Viaduct may start coming down in 2019, when traffic should be passing smooth and deep below.

So why are my fingers nervously sweating at the keyboard? Because disbelief and skepticism accompany any mega-project, along with cost overruns, blame-shifting and litigation. Somehow it's hard for developers, architects, contractors and other interested parties to believe that, yes, some day this war will be over!

Because until then, how can we make any plans for the waterfront, Pike Place Market and Pioneer Square? How can we commit to new projects, hire staff, take out construction loans or begin marketing new offices and apartments?

It was with that worried attitude, then, that I visited the New York office of James Corner Field Operations last month. JCFO is based on the far west side of Manhattan by the rail yards, a few blocks north of the wildly successful High Line park, which the firm designed on an old elevated railroad trestle.

JCFO won a competition to redesign the Seattle waterfront back in 2010, three mayors ago. 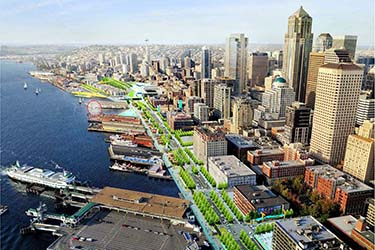 Image courtesy James Corner Field Operations [enlarge]
Tatiana Choulika of JCFO is in charge of the $700 million waterfront project. She has been visiting Seattle monthly for the past six years and says design work is right on track.

Since then, Waterfront Seattle — basically the public face of the city's Office of the Waterfront — has produced an array of confusing bar charts and diagrams to show progress (or lack thereof). Apart from the viaduct and tunnel, the multi-pronged, multi-phased mega-project has so many components — seawall, ferry terminal redo, Piers 62 and 63, cycle track, the aquarium and Pike Place Market expansions — all on different timelines! How can you make sense of it all?

That was the question I put to Tatiana Choulika, JCFO's principal in charge of our $700 million waterfront redesign. She's a very cosmopolitan, multilingual and multicultural personality, and reminds me of Isabella Rossellini, both stern and funny.

So what about the delays?

“Every project is like that! It's not just Seattle. It's every city,” Choulika says. JCFO spent 15 years on the High Line, she recalls, which was also built in phases across numerous rights-of-way, with different and sometimes competing stakeholders.

“It's always the same,” she says. “All these great projects are really long. You have to be patient, and you have to have endurance.”

These great projects are actually several projects. She describes “a parallel process” in Seattle with separate partners (and budgets), including SDOT, WSDOT, Seattle Aquarium, Pike Place Market Preservation & Development Authority and Seattle Parks Department. Besides its own work, JCFO has to juggle the interests and schedules of these parties.

Even so, Choulika sees a lot of progress since the project's inception, when there was a lot of “fear and doubt.”

“Seven years later, we're in a completely different situation,” she says. “People think we're at a standstill, but we're not. It's not frustrating. It's normal.”

Never mind the city's colored bar charts and percentages of this or that completed, says Choulika. “It's design-speak.” Or rather, it's more like budget-speak: well-intentioned Seattle bureaucrats attempting to gauge progress on a drawing board 3,000 miles away.

Choulika has been visiting Seattle monthly for the past six years, she says. From her perspective, the design work is right on track. Her team presented its last update in August.

Moreover, she sees a sea change in local business attitudes since the project began. “Before, every conversation was about the parking,” she says, not the views. Now she sees waterfront businesses realizing “that scenery is much more valuable than a parking lot. People suddenly understood the asset. ‘I better hop on the bandwagon.' They're starting to realize they have to participate.”

Anecdotally, she cites the example of Ivar's flipping its office views toward Elliott Bay and away from the viaduct.

“The city is being dragged along,” she says. “We had to jump over a few hurdles.” Recent among them was Initiative 123 — rejected by voters in August — that would have preserved part of the viaduct as an elevated park. Rolling her eyes at any comparison to the High Line, Choulika says there's new momentum for the Seattle waterfront redesign, “Now that we know for sure the viaduct's coming down.”

The most visible manifestation of such momentum is MarketFront, the new Pike Place Market building under construction west of Western Avenue. Miller Hull is the architect.

West of MarketFront, JCFO has designed the Overlook Walk, which will connect the market with the aquarium. But, obviously, construction can't begin on that until the viaduct's gone.

In the meantime, says Choulika, JCFO's design work is nearing completion, and it includes a full re-think of the 1975 Waterfront Park. “That wall is gonna come down,” she promises of the park's daunting concrete barrier to entry.

Seven years into the Seattle waterfront project, says Choulika, “We've really hung onto our ideas. Otherwise ideas become diluted. You get into the weeds and then you drown.”

And whether construction starts in 2019, 2020 or later, she says, “It's totally worth it. All this money is pouring in.”

Kevin Daniels' Gridiron condominiums, expected to finish next year, will eventually face a redesigned plaza on Railroad Way. And Greg Smith's Urban Visions has taken charge of the troubled site at 316 Alaskan Way S. (at Jackson), where some new housing will surely emerge.

As I said, some day this war will be over.