On the Block: A tale of two Ballard corners — one speedy, one slow to develop

Early last year, Saratoga Capital paid about $9.5 million for two nearby corner development sites in Ballard. They face each other, roughly, on opposite sides of 20th Avenue Northwest. Apartments are planned for both, and GGLO is the architect for both.

Saratoga, of Los Gatos, California, calls it 57th Ballard. That plan is proceeding on the usual development schedule. The land sold last March for $5.9 million, and planning began soon thereafter. After a few rounds of design review this year, construction could reasonably be expected to start next year. Then typically follows 18 to 24 months of construction and — voila! — the project begins paying for itself possibly by 2023. If everything goes right.

Renderings by GGLO [enlarge]
A master use permit was already lined up when Saratoga Capital acquired this site at 5601 20th Ave. N.W. The firm is planning a seven-story apartment building with 51 units.

[enlarge]
At 1761 N.W. 57th St., Saratoga wants to develop an 81-unit apartment building. The project has its first design meeting next month.

By contrast, west across the street is 56th Ballard, where GGLO already has a polished design. That seven-story building will have 51 apartments (including four live-work units) and 25 underground parking stalls.

GGLO is simply modifying the old MUP, which was granted under the old zoning in 2014 to InHaus Development of Vancouver, B.C. InHaus had planned a six-story, 38-unit project called Salt Ballard Condos. InHaus had previously developed what were called Solo Lofts nearby — which started as condos but sold for nearly $10 million in 2016 as a 20-unit apartment project.

GGLO's design bears little resemblance to the InHaus project (by Canadian firm Place Architect). It has a prominent setback on 20th at the second floor, creating a long terrace. The roofline is varied, with a two-level roof deck. And there are more notches, relief elements and facade colors/materials than before. 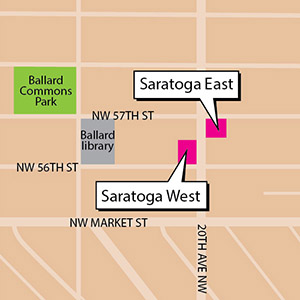 There will be a large bike room, and possibly stacked parking lifts for cars. A mandatory affordability payment of $313,000 is calculated for the project. Saratoga hasn't announced a start date or contractor for either project, but 56th Ballard seems certain to launch first and get to market sooner.

Meanwhile, Saratoga and GGLO are also working on a corner redevelopment plan at 2616 Western Ave. in Belltown. There, at Cedar Street, two old buildings would give way to an 18-story, 186-unit tower. It'll apparently gain height beyond the 145-foot zoning via LEED certification and the city's Living Building Pilot Program, which grants extra floor area for various green features — and shortens the permit process.