Ethiopian dancers twist and turn on TV above the bar, and the food is superb. Hand-carved statues, masks and bags of grains line the shelves of the Ethiopian store in the other half of this nondescript space in a strip-mall structure at 23rd and Jackson.

The Taco Del Mar on the corner is one of the best in the city.

Will all these shops return to this spot in the Central District after Paul Allen's development company, Vulcan, takes out the entire southeast corner to replace it with about 570 apartments above retail and underground parking?

The Taco Del Mar chain isn't going anywhere though. The Ethiopian store and restaurant will move. Grocery chains — Whole Foods, Trader Joe's and Metropolitan Market — are already jockeying to open in other Central District hot spots, replacing the Red Apple that Vulcan's redevelopment will take away. 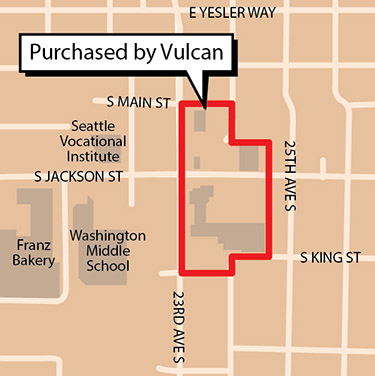 In other words, when the construction dust settles — several years from now — the change also will have some upsides. Well, more than a couple: A lot of new housing where NONE is now. Significantly more retail, nourished by around 800 new residents. A comfy public plaza where a sea of parking sits today. And more parking — all underground.

Many of those 800 new residents will be able to make short, pretty clean commutes — by biking, walking or taking the new trolley — to jobs downtown and in South Lake Union.

A friend offered this as consolation: “Well, African-Americans are already mostly gone” from the Central District. Down from 73 percent in 1970 to a bit under 20 percent now and projected to be about 14 percent by in 2019.

Cities change and change. We've said it time and again. So far none of them appear to have found a way around this downside, despite trying.

Seattle tries too. Government incentives will lead Vulcan to make about 112 (or 20 percent) of the apartments affordable to folks earning 65 percent to 85 percent of the area's median income. (That's not poor people housing; that's “workforce” housing.)

Vulcan's $31 million purchase of the 6-acre Promenade 23 retail area at 23rd and Jackson has extra punch because it's a big play by a big player. But look around a bit and you'll see that changes along the Central District's main through-ways have been happening for decades. This corner gets a new building, then that one. Then an economic downturn hits, followed later by a few more new projects, and then another downturn.

Some of the seeds were planted back in the 1980's with efforts that led to the Growth Management Act around 1990. The GMA channels growth inward to keep things from sprawling outward into the mountains and farm fields. That means big changes for close-in places like the Central District.

There were some hits in the early 2000s around 23rd and Jackson (new housing in Welch Plaza and 23rd Main) and now here comes Vulcan.

Vulcan's first phase would build the 570-unit mixed-use complex on 3.6 acres on the southeast corner of 23rd and Jackson.

The other 2.4 acres Vulcan bought are on the northeast corner. A Starbucks (that was almost revolutionary 20 years ago for going into a “minority” community) occupies the corner with Walgreens, as well as other retail and another sea of surface parking.

A flower shop in a weathered one-story structure occupies the northwest corner of the intersection. The six-story Welch Plaza, which opened in 2004 with apartments, condos and retail over underground parking, has the southwest corner.

Vulcan said it has no plans now for the Starbucks corner.

Some people point out the irony that the CD became a black area when African-Americans were red-lined from living anywhere else in Seattle, but now those restrictions aren't legal. In theory people can go where they wish. And there's irony that all the redevelopment is finally bringing the kind of services that CD residents sought for decades. They'll just serve the newcomers.

Another upside gets less attention: What happens in the residential neighborhoods close to 23rd and Jackson?

We drew a map from Yesler on the north to Dearborn on the south and 29th on the east to 18th on the west. Between Jan. 1, 2007, and June 30, 2007 (six months), 50 homes sold in that area, according to data from Northwest Multiple Listing Service. Of those, 14 were older single-family homes, 16 were condos and 20 were faux-craftsman townhomes built in the previous decade.

This was “the peak” before the sub-prime meltdown began in August 2007 and the economy went over the cliff on 9-15-08 into the Great Recession.

The past four years of prices rising again have brought prices across the region back to, and in some cases a bit above, the 2007 peak.

They averaged $430,520. That's still below the average for Seattle as a whole, but it's up 21.6 percent from the 2007 peak — and that's a larger increase than the rest of Seattle. Those sellers, whoever they were, made some money on gentrification.

Those who still own there, whatever their cultural background, are going to make some too, such as when those 570 apartments above retail, plaza and underground parking are built.