Kemper Development Co. appears to be close to landing two more tenants for its Lincoln Square expansion and that would mean about half of the 710,000 square feet of office space is taken.

Representatives of Kemper Development and its broker, Broderick Group, declined to comment but several sources told the Buzz that the video game company Valve has signed a non-binding letter of intent for between 225,000 and 250,000 square feet in the 31-story tower at 400 Bellevue Way N.E. Sources also told the Buzz that the co-working firm WeWork is in talks for 75,000 square feet in the building. WeWork has several locations in Seattle, according to its website, but this would be its first in Bellevue.

Bobby Shanahan, a research analyst at Colliers International in Bellevue, said he has heard about Valve's letter of intent and said it appears the company has chosen Lincoln Square over Schnitzer West's Centre 425, which is also under construction.

Valve and WeWork officials did not respond to requests for comment. 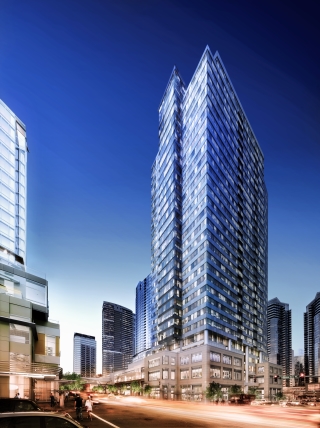 Landlords in downtown Bellevue have competed hard for Valve and sources say they have offered some pretty enticing terms. This reveals some concern from landlords about the strength of the office market. Are there enough big fishes like Valve to fill all the new buildings opening soon? Between Lincoln Square, Centre 425 and Trammell Crow's 929 Office Tower, more than 1.5 million square feet of office space is under construction in downtown Bellevue.

A new report from Kidder Mathews puts the vacancy rate in downtown Bellevue at 10 percent. Some experts have said that number could top 20 percent in the coming years with all the new space plus Expedia moving to Seattle.

On top of this, one of downtown Bellevue's biggest tenants, Microsoft, is focusing more on expanding its Redmond campus.

But Shanahan said other companies in the area are growing quickly, possibly picking up the slack for Microsoft, so many landlords remain confident that there's enough demand to fill that new space.

The 1.5 million-square-foot Lincoln Square expansion includes the 31-story office tower; a 41-story tower with a W Hotel topped by 231 luxury apartments; and 180,000 square feet of retail, restaurants and entertainment space.

It's all set to open next spring.

So far, two floors in the office tower have been leased. Former Microsoft CEO Steve Ballmer is taking the top floor and Stifel Nicolaus, a wealth management and investment company, has leased the 20th floor.

Kemper Development has announced several restaurants as well as a six-screen Cinemark Reserve movie theater that will complement the existing 16-screen Lincoln Square Cinemark. The new theater will have reserved seating, a restaurant with in-seat service and “Cinemark Luxury Loungers.”

Valve was founded in 1996, and is one of a number of gaming companies in downtown Bellevue. Valve's first big hits were games like Half-Life and Counter-Strike. It's now a big player in the e-sports field, with tournaments for Valve games such as DOTA 2 drawing thousands of spectators to arenas throughout the world.

Valve is working with HTC on a virtual reality headset, and it produces other pieces of hardware. Its Steam platform allows people to download and play thousands of games online, as well as socialize with other gamers and share content.

Pike Place Market Foundation has reached the halfway point in fundraising for the market expansion, with donations from more than 2,400 “Piggybackers.”

The foundation said in a release it has secured $4.5 million for the $9 million capital campaign for MarketFront.

The $73 million MarketFront will be finished in January. It will have a 300-stall parking garage that connects on two levels to the existing Public Market Parking Garage. A four-story building will have 36 housing units for income-qualified tenants, and there will be a 17,000-square-foot building with restaurant and retail space. The 46,000 square feet of outdoor space will include a pedestrian link to the waterfront.

Miller Hull Partnership is the architect, Sellen Construction is the general contractor and SOJ is the project manager.

Donors can have their names written on bronze hoofprints and mosaic tiled fish that will be incorporated into MarketFront. The deadline is July 1.

The MarketFront plaza will be poured in August.

Here are some of the biggest donors so far: the Estate of Leann Loughran, Nordstrom, Estate of Gloria Metzger, Urban Visions, Matt Griffin and Evelyn Rozner, Joshua Green Foundation, Joe and Pat Desimone, and the True Family.

For more information, or to donate, visit: www.pikeup.org.