Running a mental health nonprofit is taxing enough given the poor economy and increased number of people seeking services. But when your primary building and campus is suddenly positioned just eight or so stories below the flight path of a new runway for an international airport, the noise can be nerve-racking and the stress level unbearable.

“The planes come over very low and very loudly. For some of our clients dealing with post traumatic stress disorder, having a plane landing over your head every five minutes isn’t a pleasant place to be,” says David Johnson, Navos’ chief executive officer.

Navos is one of the largest providers of mental health care for children, families and adults of all ages in the county, and it offers employment programs for adults with mental illness. The nonprofit assists in situations that harm or disrupt emotional growth for children and families; treats individuals with chemical dependency, co-occurring disorders and mental illness; and provides vocational training, rehabilitation programs, and professional industry training. Navos provides these services in a 1950s cinder-block school leased from the Highline School District. 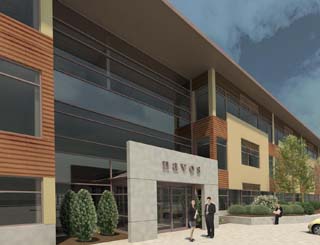 Image by DKA Architecture [enlarge]
The 45,000-square-foot clinic, set on a 3.5-acre campus, will have an adjacent meeting center with an assembly room and a cafe. The project will be built in stages as funding becomes available.

The tired building has classrooms connected outdoors by breezeways, and the pantry of the old kitchen and a janitor closet were reconfigured years ago to house Navos’ crisis center. Many of the former classrooms were divided into funny shapes for offices and a pharmacy. When the need for services grew, three outside portables became places to hold group and individual counseling.

“We’re a little off the beaten path, and this has been a great place where clients who had serious and persistent mental illness could stay and spend the whole day,” Johnson says.

“We rented many of the houses in the surrounding neighborhood so clients could have a safe, decent and affordable place to live nearby.”

That all changed when Sea-Tac Airport received approval to add a third runway. The city determined that real estate in the area was better suited for airport-related industries. Navos quickly lost the rental housing for people it serves. The homes were torn down and Navos found itself surrounded by empty fields and an airport parking lot, and when the runway finally went live in late 2008, it needed to find a new home.

For a nonprofit that reinvests in programs and services with little left over for buying or building a new facility, seeking new space typically means finding leased space that might not be ideal. But King County and the city of Burien worked with state Legislature to raise $1.5 million towards a new Navos building.

Navos’ new home and campus will sit on 3.5 acres owned by the Highline School District for which Navos has a 60-year lease. The site housed an abandoned school, deemed unsalvageable by Navos’ architect, DKA Architecture, and construction team, led by Abbott Construction.

The team will break ground this month on a $12 million mental health clinic that will house services in a three-story, 45,000-square-foot building with an adjacent 3,600-square-foot meeting center. The meeting center will have an assembly room available for Navos and public use, and will house Navos’ Third Runway Cafe and Catering business.

Due to the limited resources and tight credit market, the project is being built in stages as money allows, which makes planning and construction management more difficult. The team, however, is prepared for the additional challenges.

It helps that DKA, Abbott Construction and Navos are working together on their third project. And that the city of Burien understands the current credit market and is flexible regarding the staged construction and site prep, which began in 2009.

The project was put on hold in January as more funding was raised, and is slated to begin again this month. Managing a project this way is more difficult and unusual.

“In an ideal world, we would have waited until we raised all the money before we started building, but we don’t have the luxury of doing that because we have to be of out (the existing facility) by 2012,” says Johnson.

Navos’ new Burien campus will face an additional challenge: The old school lot contains a steep slope at one end, and the former school was built all the way up to the slope. Part of the project includes restoring a buffer area with native plant materials.

The building is being designed so it is as low-cost and maintenance-free as possible. The building’s exterior will be a combination of metal siding and glass, which don’t have to be painted, and the building is designed simply so it is easy to construct in stages.

While state funding stipulates the building needs to be built to LEED silver standards, DKA is targeting LEED gold. Sustainable strategies will include site planning to reduce impact to the site by retaining as much existing vegetation as possible, demolishing and recycling existing improvements, and reducing the water needed through low-flow plumbing and a temporary irrigation system.

In addition, DKA plans to use as many locally manufactured materials as possible, use materials of high recycled content where possible, and use low- or no-VOC products. The team will try to recycle more than 95 percent of the construction waste.

Because of its differing services and clientele, the new center needs to have treatment rooms, meeting rooms, individual offices, a commercial kitchen, a restaurant and common waiting rooms. The building needs to have separate waiting areas for children and families, and spaces that don’t connect to those areas where adults with serious and persistent mental illnesses are treated. Primary health care areas need to meet different standards than those simply for counseling areas.

“On the new campus, we will have a separate conference room and training area that doesn’t look at all like the elementary school gym we currently use,” Johnson says.

“And we’ll have spaces that can be shared, but also separate cul-de-sacs within the building where staff on the same team can work closely together when they need to.”

Historically, centers designed to treat mental illness weren’t located next to or connected to those offering primary care. But research has shown that people with serious mental illness die 25 years earlier than others, Johnson says, and therefore mental health centers like Navos need to be more assertive in helping them get primary care. One way to do that is to make it extremely convenient for them to receive primary care at the same place they are receiving behavioral care.

“People who have significant psychiatric symptoms may feel more comfortable, well accepted and safer getting all their health care in the same spot,” Johnson says. “And we can be very assertive in making sure they get that care.”

The new meeting center and a higher-profile location will be a big boost for the Third Runway Cafe and its catering business. The cafe doubles as an employment training center for adults with mental illness. It was started eight years ago and handles catering events of up to 400 people. Customers use Navos’ catering division for weddings, city and county functions, and they visit the cafe for lunch.

“Like many nonprofits, it’s hard to put money away for a new building and we’ve not had the fancy facilities that some other mental health facilities have.”

Mitch Yockey is a senior architect with DKA Architecture.