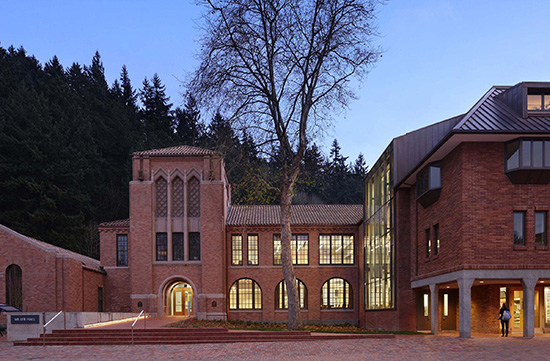 The renovation of Miller Hall combines targeted alterations with a thorough reorganization of two existing wings to reinvigorate a historic building and the surrounding campus.

Decades of piecemeal remodeling had divided Miller Hall into inhumane spaces without light and air. Users were disoriented by the building’s three stairs, nine levels of floors and two wings, and much of the building was inaccessible to mobility-impaired students.

The project team won back space wherever it could be found. New dormers reclaim a previously windowless attic, and an existing service basement was excavated into usable computer classrooms. The most visible addition, a green-roofed collaboration space, now fills the previously neglected central courtyard.

Jury comment: “The design’s strength is what was added within the existing buildings. The comparison between old and new is amazing and as a reorganization and knitting together of uses, it is really well done.”