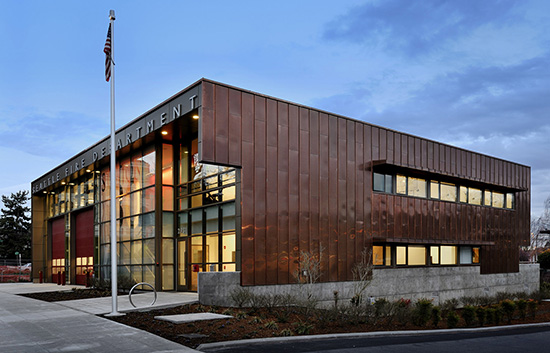 Photo by Doug Scott [enlarge]
A glass curtainwall gives passers-by a glimpse of the fire engines inside.

Located at the base of historic Mount Baker Boulevard South, the civic character of the 9,500-square-foot building marks a transition from the commercial scale of Rainier Avenue to the Mount Baker residential neighborhood and creates identity for the fire department.

The simple form and transparent main facade give the building a monumental scale. Facing north across the boulevard toward downtown Seattle, a curtainwall allows passers-by to see the fire engines in the apparatus bay. At night, the illuminated facade serves as a beacon that signals the fire department’s place in the community.

A copper skin folds over the two-story volume, providing a simple covering for the complex program inside. The building is designed to be operationally efficient and to facilitate quick response times for emergency personnel. The design expresses the structural nature of the light frame construction, which floats over a heavy concrete base of auger-cast piles that provide stability in the site’s liquefiable soils.

Jury comment: “This fire station design is an elegant expression of a utilitarian building. The metaphorical use of red for the door and the wall that is revealed behind the etched glass are nice details that elevate the building.”