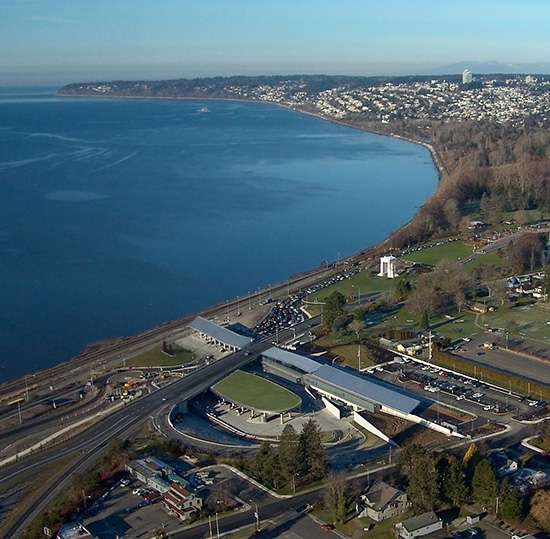 Photo by Mike DeRosa [enlarge]
The entry port straddles the tidelands of Semiahmoo Bay and the historic gardens of the Peace Arch State Park.


A new gateway to the nation, the Peace Arch U.S. Port of Entry straddles the tidelands of Semiahmoo Bay and the historic gardens of the Peace Arch State Park. The design preserves the character of this scenic roadway while accommodating 88,300 square feet of new construction, including a 34,400-square-foot port building with 10 lanes of inbound primary inspection, 40 spaces of secondary inspection and a new highway bridge.

The entry port gains its expression from the building’s linear roof, which forms a symbolic gesture that echoes the border and unites the program elements in a single line. The roof is made to visually float by pulling the building in from its edge and by a band of continuous glazing at its underside.

Where the program requires greater dimension, the building extends below the roof’s width in a series of boxes.

Through careful site composition and minimizing the visible size of built elements, the design accommodates expanded operations with limited disturbance to the surrounding landscape, qualities which contributed to its LEED gold certification.

Jury comment: “This is high design and a real gem of a building that creates a seamless transition between our two countries. This is a project doing a very different job than what we see in civic architecture. It’s about giving to the community by putting the government away.”