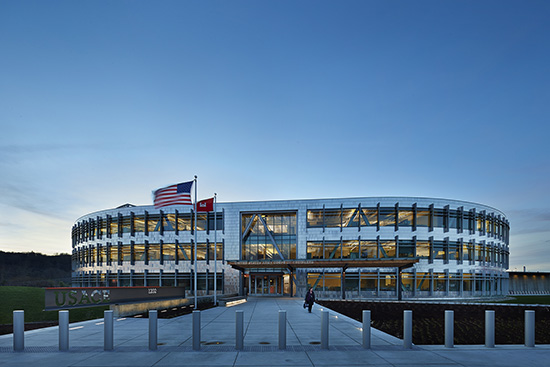 Photo by Benjamin Benschneider [enlarge]
The new Army Corps headquarters is expected to be one of the most sustainable office buildings in the country.

Federal Center South Building 1202 is the result of responding to both the 2009 American Recovery and Reinvestment Act, which focused on improving our nation’s infrastructure and creating jobs, and the U.S. General Services Administration’s Design Excellence program.

With reuse and high energy-performance as part of both the GSA and ARRA requirements, the building transforms a 4.6-acre brownfield site into a highly flexible and sustainable 209,000-square-foot regional headquarters for the U.S. Army Corps of Engineers Northwest District.

Located in South Seattle’s transforming industrial zone, the project underscores GSA’s commitment to efficient and enduring federal buildings and celebrates the corp’s mission of transforming and restoring the nation’s waterways with an environmental focus. The indoor campus environment enhances the concept of a collective community by centralizing all common services within the atrium or social heart of the building. It also promotes the positive effect of biophilia; the intrinsic bond between human beings and living systems.

Current energy models predict the building will be net-zero capable.

Jury comment: “This project reads like two separate buildings: the slick outside with the jewel inside. The design feels very European and for a federal building the design is a giant step forward.”