As a new landmark for the city, the Seattle Arena will deliver an amazing game-day experience for NBA and NHL fans and enliven the growing Sodo neighborhood.

The building’s distinctive stone, metal and glass facade reflects its industrial neighborhood and the varying heights of structures built over the past 100 years. Contrasting the structurally expressive gestures of its neighboring football and baseball stadiums, the arena design emphasizes the enclosure of the energetic performance space that forms the building’s heart. Reflecting Seattle’s proud aviation history, the iconic fins on the roof are inspired by a jet engine’s turbine blades.

“The integration of the arena with the other two sports venues and surrounding neighborhoods provides a southern terminus to Seattle’s new waterfront, energizing both the stadium district and the entire city,” said HOK urban designer Jerome Unterreiner, a frequent contributor to the redevelopment of Seattle’s waterfront over the past several years.

At 700,000 square feet, the arena will seat 18,000 people for basketball and hockey games and up to 20,000 for concerts. The development also has a 74,000-square-foot NBA training facility and a parking garage for the team, staff and VIP guests. 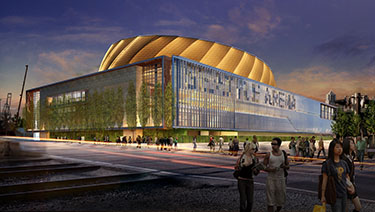 [enlarge]
Fins on the roof are inspired by the area’s aviation history.

HOK’s design of the seating bowl brings all fans closer to the action. Club and suite seat ticket holders will enter the building at ground level through a dedicated premium club entrance on First Avenue. Positioned a few rows off the floor, these suite seats will be among the best in the NBA and NHL. Three innovative “sonic rings” replace the “nosebleed” seats of a traditional upper deck. Leaning in toward the court, these seats provide 2,500 fans with exceptional front-row vantage points and a luxurious club atmosphere.

Glass concourses connect guests to Seattle’s beautiful skyline, the waterfront and, on a clear day, Mount Rainier. Views of city landmarks help fans navigate through the building and contribute to a distinctly Seattle experience.

The arena design creates a model of sustainability. Energy-efficient displacement cooling maintains a comfortable temperature in the seating bowl. Concourses will be heated and cooled by energy-efficient radiant systems.

Shading devices along the exterior will control excess heat from the sun while enabling the structure to retain its interior and exterior transparency. Solar thermal tubes shade south-facing glass while generating hot water for use in the building. 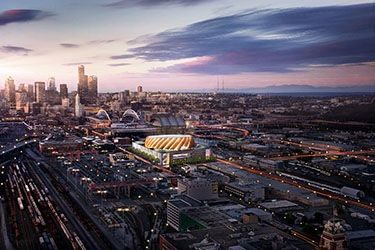 [enlarge]
The arena will integrate with CenturyLink and Safeco fields to create a southern end to Seattle’s new waterfront.

Green surface treatments on the roof capture 95 percent of the rainwater that reaches the building, reducing its impact on the city’s storm sewer system. An innovative wastewater treatment system called the Living Machine captures, treats and reuses wastewater within the arena.

On non-game days, the arena will continue to contribute to the community. Infrastructure improvements to the blocks surrounding the arena will include a new bicycle and pedestrian bridge over the railroad tracks east of the site, improving access and safety in the Sodo district. Rain gardens near First Avenue and Holgate Street will beautify the street while treating rainwater to minimize its effects on the city’s stormwater infrastructure.

The addition of more than 30,000 square feet of outdoor public space — comparable in size to Occidental Park and Westlake Park combined — will benefit the community year-round. The large outdoor plaza will accommodate intimate concerts, watch parties, a weekend farmers market or an outdoor basketball tournament. The club restaurant will spill out onto First Avenue and fans will frequent the surrounding businesses.

Additional infrastructure to support lunchtime food trucks will be provided by the neighborhood.

“The design of outdoor public space around the arena embraces the history of the site and promotes education, sustainability and public access,” said Mark Brands, managing principal of Site Workshop, the design firm that oversaw the site and landscape design. “This space is intended to be used on a regular basis by the Sodo community while providing a regional attraction that strengthens the entire stadium district.”