Installing an AV system? Try your IT network

Audiovisual systems are critical to the functionality of today’s schools, conference centers, meeting rooms and performance spaces. All of the content that is projected from a digital source to the masses over monitors, screens and speakers uses the facility’s AV systems and infrastructure.

Project decision makers, audiovisual designers and information technology managers need to be aware of the benefits of adding audiovisual systems to their converged IT network instead of designing stand-alone AV system infrastructure.

As IT network bandwidth in buildings becomes less expensive, more and more systems are using a facility’s IT network as the pathway to communicate. Most building systems like HVAC, building automation and security, for example, have already made the move to using the IT network for centralizing communications.

Audiovisual systems are headed in that direction and we see this becoming more prevalent within the very near future. Using a building’s IT network can simplify audiovisual installation, use and maintenance while lowering overall cost. This information is especially relevant to those designing corporate meeting spaces and higher education, but applies across all markets.

The basic audiovisual system purpose is to allow you to present content from a computer onto a display to share with multiple people. The system consists of a source and a destination. The source can be a range of devices from a PC, laptop, DVD player, or a cable plugged into your portable device. Destinations can range from monitors, televisions, projectors and screens. It’s what happens in between the source and the destination that offers great opportunity for streamlined communication.

In standard audiovisual technology design, source data is routed to its destination display over dedicated cables. The type of this connection depends on display resolution, length of cable and the manufacturer. In a simple audiovisual system, a source can be connected directly to the display.

In more complicated systems, where you have multiple sources and/or multiple displays, a switcher is required to allow these sources to be routed to the displays. This switcher can be very simple or very complex depending on how many sources need to be connected and how many displays are present. 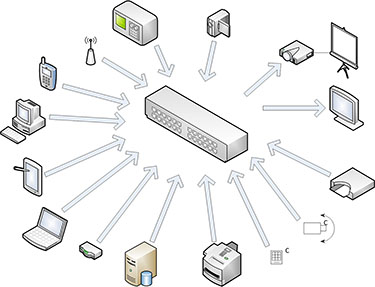 Image from Stantec [enlarge]
Switchers are the bottleneck of traditional AV systems. Using an IT network, pictured, bypasses them.

Switchers can get even more complicated when you introduce options like combinable rooms (rooms with movable partition walls) and/or overflow spaces. Additional hardware and software is required in these systems to include the ability to share sources with rooms in different locations.

A typical meeting room audiovisual system takes an audiovisual connection, like the HDMI connection from your laptop, converts it to a proprietary signal, passes it through a proprietary switcher and then routes it to a receiver that converts the proprietary signal back to HDMI before connecting it to the display. The bottleneck for connectivity and routing options comes at the complexity, or lack thereof, of the switcher. The options have to be built into the switcher to allow any of the required features to be available. Each additional required feature comes with an increase in cost.

Instead of converting the meeting room’s audiovisual source signal to a proprietary signal, a better option is to convert it to a standards-based IT network signal that can transverse the facility’s standard IT network topology and hardware. At the destination end, instead of converting the proprietary signal back to an audiovisual signal to connect to a display, a standards-based IT network audiovisual receiver is used to do this task. This allows the already installed network infrastructure to transport the audiovisual signal from source to destination.

In addition to this simplification of cable routing, you also get the ability to route any source to any display that is residing on the same network. This removes the central proprietary audiovisual switcher from the equation by using the IT network itself as the “switcher.”

An additional feature of using standards-based IT networking for audiovisual systems is the ability to share resources, such as recorders, video-teleconferencing units and windowing processors. The IT network also makes sharing (streaming) audiovisual content across multiple locations simpler than ever before. One-to-one connections can be made using an intranet while one-to-many connections can be made using the Internet.

Why isn’t everyone doing it?

In order to add additional devices to a business or campus IT network, you’ll need buy-in from the IT managers. A place of resistance is typically found with the following question: “Since this audiovisual device is residing on our network, will we be responsible for maintaining and troubleshooting it?”

This is a valid concern, although this question has already been asked and answered with the other building automation systems devices, such as security cameras and key card interfaces that are already running through the IT network.

The question, in regards to networked audiovisual systems, should be answered the same way as it is for the other systems: the IT personnel manage the connections while the facilities people manage the devices. This unity is where the greatest savings is realized, as it reduces the cost of both the infrastructure and hardware required to create even complex audiovisual systems. This also allows for flexibility in audiovisual systems that would otherwise be extremely cost prohibitive.

In building design, providing the infrastructure and pathways to accommodate even a modest audiovisual system with its own cabling system can come with a significant cost. With the IT network already included in the design, slightly increasing its capacity (both physically and in bandwidth) and moving the audiovisual system to the IT network can allow audiovisual connectivity to be located wherever there is a network jack. This creates simple and low-cost flexibility that isn’t currently being realized.

Steve Malone is an audiovisual consultant in Stantec’s Lynnwood office.