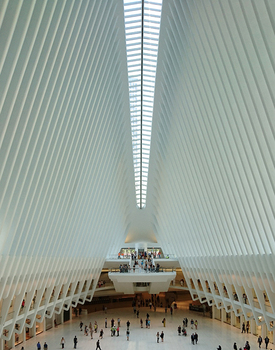 A 300-foot opening in the roof allows natural light into the commuter hall.

One hundred feet above the ground at the tip of New York’s Manhattan Island, a giant steel-and-glass, dome-like structure rises over the new World Trade Center Transportation Hub.

The eye-catching structure, designed by world-renowned architect Santiago Calatrava, is inspired by what appears to be a pair of hands releasing a white dove. The structure, called Oculus, consists of two parallel arches spanning a 300-foot-long oval-shaped opening in the roof, supported by columns spaced five-and-a-half-feet apart. Glass panels fit in between the columns, allowing natural light to bathe the 200,000 daily commuters below.

Yes, it is beautiful and inspiring, but it also was an extremely complex and complicated structure to design and build. In fact, because of its bridge-like design, the Port Authority of New York and New Jersey didn’t seek out a traditional structural engineering company to help build it. Instead, the port hired for the project a top bridge-engineering firm, COWI North America, and its New York bridge division, Buckland & Taylor International.

Santiago Calatrava was the lead design and calculating engineer.

(Editor’s note: The article has been changed to clarify Santiago Calatrava’s engineering role.)

A sequential erection scheme, used in bridge construction, was deemed the ideal approach. Essential to this scheme was a custom “finite element analysis” model that determined the cambered shape of each individual steel segment and computed the stresses in the structure and the position of the geometry control points during each stage of the erection.

The project team also identified significant risks associated with traditional “field welding.” To mitigate these risks, COWI replaced welded splices in the arches with bolted connections. Fully connecting an arch piece by field welding required almost three weeks, but with bolts, the connection could be completed in two days.

Dan Payea, a vice president for Skanska, the contractor, wrote, “Applying bridge engineering concepts and first principles to the erection of the building allowed this highly complex project to be completed safely and accurately.”