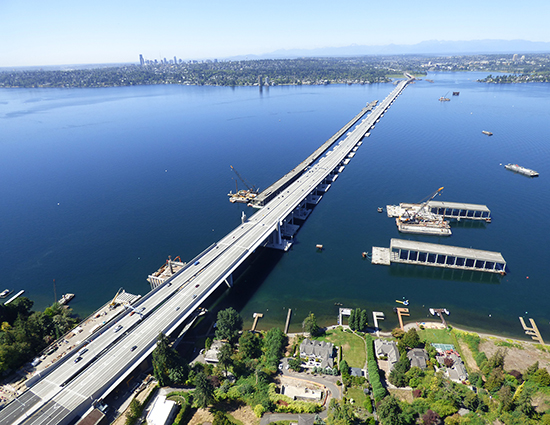 Photo courtesy of HDR Engineering
The new state Route 520 Bridge is supported by 21 of the heaviest, widest, deepest and longest floating bridge pontoons ever built.

The greater Seattle area is expected to grow by at least 1 million more people and 40 percent more traffic in the next 25 years. So how do you fix the state Route 520 Bridge — one of the largest, most obsolete transportation corridors in the area — especially when it crosses the state’s second-largest lake?

One of the main problems facing the Washington State Department of Transportation was that water gathered in the hollow pontoons supporting the bridge, requiring regular pumping. The bridge deck was less than eight feet above Lake Washington’s surface, so heavy rains and winds would create waves that would crash onto the deck, endangering motorists and bicyclists, and pedestrians were forbidden on the bridge. In addition, approach spans were at risk of collapse since they did not meet current seismic standards.

Still, more than 115,000 vehicles crossed the bridge daily, and it operated near capacity for more than 13 hours daily.

WSDOT needed an engineering team that could hit the ground running, and hired HDR Engineering as the general engineering consultant to oversee preliminary design, preparation of requests for proposals, construction management and environmental mitigation.

Even though the project included roadway renovation on either side of the bridge, the complexity of the challenge was exacerbated by the bridge’s location over Lake Washington, which plunges to a depth of more than 200 feet over the top of another 200 feet of soft silt — not the best bridge anchoring scenario. So HDR’s team simplified things by turning the marine job into a land job whenever possible, even though there was just a 150-foot-wide stretch of shoreline for all land access to over-water construction activities.

The new bridge is supported by 21 of the heaviest, widest, deepest and longest floating bridge pontoons ever built. At 360 feet long, 75 feet wide and 28.5 feet high, the longitudinal pontoons weigh nearly 22 million pounds each.

The pontoons are anchored by 3 1/8-inch-diameter cables (nearly an inch thicker than the old cables) that descend as much as to 1,000 feet into the lake and tie into one of 58 anchors. The bridge now can resist up to 98 mph winds, equivalent of a 100-year storm, and its higher bridge deck (20 feet over the lake versus the old eight feet) prevents large waves from washing over traffic.

The new bridge deck is 56 feet wider than the old bridge deck and includes a 14-foot-wide bicycle-pedestrian path with several “belvederes,” or viewpoints, along the way. It also provides six travel lanes for vehicular traffic, including a dedicated transit and high-occupancy vehicle lane in each direction. Also, the team prepared the new bridge for light rail with a design that allows pontoons to be added and the bridge to be widened.

“The new bridge will give our state’s most populous and economically robust region much safer, more reliable, and more environmentally responsible transportation for decades to come,” said Roger Millar, secretary of WSDOT.

On opening day, a representative from the Guinness Book of World Records certified that the 7,708-foot-long bridge — 130 feet longer than its predecessor — was, indeed, the longest floating bridge in the world.

In addition to the many technological challenges involved, the project team successfully integrated other aspects into the design such as fire/life safety, emergency power, communications, sustainability, future expansion capability and community concerns.