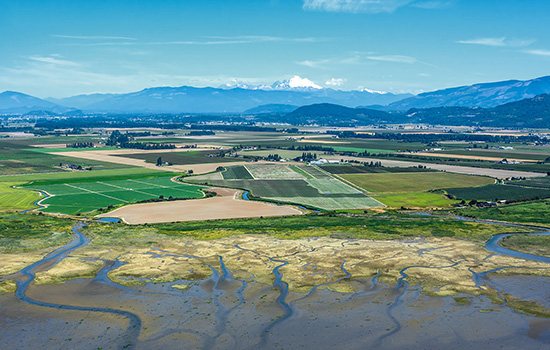 The Skagit River is the largest tributary to Puget Sound and home to 10 salmon species, including the chinook, which is listed as threatened under the Endangered Species Act.

Chinook smolt rely on estuaries for food and protection as they transition from fresh water to salt water. But the Skagit River delta had lost approximately 85 percent of its historic estuary, and in 2005 the state’s Skagit River Chinook Recovery Plan identified estuary habitat as an important limiting factor for recovery.

The Washington Department of Fish and Wildlife partnered with Shannon & Wilson and Imco General Construction to provide a feasibility study, design and permitting, public outreach and construction of the Fir Island farm estuary. The project team delivered a large-scale, highly complex habitat restoration, coastal flood protection and drainage project that balances the needs of fish, farmers, flooding and snow geese on the Skagit River delta.

A key challenge with estuary restoration, particularly in the Skagit River delta, is that the areas most important for chinook salmon are also some of the most agriculturally productive farmlands in the world, supporting up to 80 different crop varieties and serving as a worldwide producer of vegetable seeds. Much of the farmland, however, is subtidal and reliant on a complex system of dikes and drainage infrastructure, presenting quite a challenge to engineers tasked with rebuilding the estuary for wildlife.

The project design elements included a mile-long levee setback, a 9,000 gallons-per-minute automated pump station, five tide gates, a 50-acre storage pond, and restoration of 130 acres of tidal marsh and estuary habitat critical for juvenile chinook recovery. The project is expected to increase juvenile chinook smolt to between 65,000 and 350,000 each year.

Another challenge to the project was developing levee design criteria that considered current engineering design standards as well as climate change and sea level rise.

The current design guidelines of the U.S. Army Corps of Engineers and the Natural Resources Conservation Service were not specific for sea level rise and coastal resiliency design in Puget Sound, so Shannon & Wilson performed additional technical studies, modeling, and risk and uncertainty analyses to come up with new design criteria.

The Fir Island farm estuary restoration project was delivered under budget and on schedule. In fact, the final construction budget was $2 million less than original cost estimates, allowing the state to use those funds for other salmon habitat restoration projects.