Seattle is on the brink of forever changing the way the world sees the city. With the launch of the next phase of the city’s waterfront project, the “Waterfront for All,” we are taking the next step in realizing the vision of developing a new way to access the waterfront, see the city and engage as a community.

For architects in the public sector, neighborhood development and urban betterment is top of mind in approaching any community-based project. Looking at a project with the scale and magnitude of the waterfront project, the 20-block boulevard and Overlook Walk represent a game changer for the city.

When the multifaceted team of stakeholders joined the mayor’s office in January for a press conference on the advancement of this project, it spotlighted how far we have come to create a harmonious message for the advancement of making this the Waterfront for All.

Looking at the landscape of partners — from elected officials to nonprofit organizations, Friends of Waterfront Seattle, Seattle Aquarium, Pike Place Market, Port of Seattle, cultural institutions and many local citizens — this project has the potential to bring about unity in an age of divisiveness. It sets the bar high and has the potential to become one of the best international examples of civic space that will define who we are as a deeply diverse community. 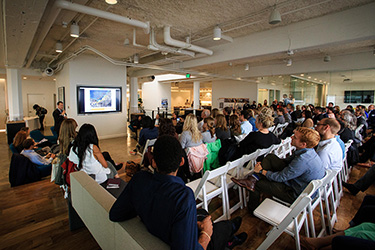 Photo from DLR Group [enlarge]
DLR Group in 2015 held a waterfront symposium at its Seattle office at University Street and Alaskan Way.

These voices have been working for over a decade to bring together a solidified program that could realize the dream of “design as democracy.” The project has the promise to create a space that will welcome, elevate, and provide equal access and enjoyment to all people regardless of age, socio-economic status, religious affiliation, race or gender.

As with any democratic process, voices haven’t always been harmonious, but the dialogue always remained open, honest and pushing toward resolution of conflicts. This milestone moment in our city’s history will continue to be successful only if we do not lose sight of the three elements that are a constant in all complex community-based projects, with the Waterfront for All initiative being no exception. These elements are context (understanding the history); commitment (assessing and engaging our current assets); and community (envisioning the future for all citizens in this space).

Anyone who has been in Seattle in the last 10 years can see and feel the pressures brought to bear by a changing density in the downtown core. This growth has been matched by massive investments in downtown, from the number of new high-rises and private development projects, including a major convention center expansion, to investment in city infrastructure and transportation upgrades.

A byproduct of this unprecedented economic growth and development has been the negative impacts to communities-of-need, including the continual rise in the homeless population. Despite the city’s 10-year plan to eliminate homelessness by 2015, our homeless population has continued to rise 21 percent since 2015, according to the One Night Count. Our investments in social services and the public realm have not kept up with a growing population of need.

If Seattle is truly committed to a Waterfront for All, we need to consider a variety of ideas that improve equity. As it is critical for the city’s growth to take down the viaduct and create this new park boulevard and Overlook Walk, it will be equally important to collaborate with a wide variety of social service providers. This will ensure we aren’t pushing away communities-of-need in the core due to lack of access to resources and accessible housing.

As we develop a new waterfront, we must also pay homage to those that were here before us, the native communities that made this land what it is today, and ensure that we celebrate their presence, their rich history, and culture in our expanded placemaking vision. We must be inclusive; we must repair broken ties; and we must respect the past as we look to the future.

Removal of the viaduct represents the city taking responsibility for one of the largest community liabilities in the current built environment and public realm. Alongside the ferry terminal rebuild and the Pike Place MarketFront expansion, the viaduct removal has provided an opportunity for multiple agencies to work together to proactively address the replacement and upgrade of major physical infrastructure and physical plant projects, turning the liabilities into assets.

We have a new sea wall, and with it, a restored ecosystem that runs along that waterfront edge. We are rebuilding piers 62 and 63 to provide a much-missed public outdoor space for large community gatherings and cultural space for the city.

We now have the new asset of the Pike Place MarketFront resulting in 300 new parking spaces, 10,000 square feet of retail space, the new public outdoor space and day-stall facility. And we have the asset of the Overlook Walk to look forward to when the viaduct disappears, making way for the tree-lined boulevard that will support not only a Department of Transportation need, but also a pedestrian and biking thoroughfare through the waterfront park.

Perhaps our greatest potential lies in the envisioned future of the waterfront as an instigator for social change.

With the Third Avenue visioning sessions underway, the Downtown Seattle Association provides a good example of how public-private partnerships can provide guidance for private land, building and business owners to make investments that run parallel to public infrastructure planning. This needs to be an integral part of the equation for a vibrant community.

Alongside public infrastructure and private investment, we must commit to new and expanded ways of making social service investments. An example of the reimagined waterfront from the Pike Place Market is the drop-in resource center on the southeast corner of the MarketFront project, The Market Commons. Whether someone is a visitor to the city or from a marginalized population looking for resources, The Market Commons is a place to come, get information, enjoy a cup of coffee, and when you walk out, find yourself in a better position than when you came in.

Moving forward, we need to consider this commitment to social betterment by leveraging both public and private investment dollars so that the investment made by an affluent community also has a plausible impact on the communities-in-need. Beyond rhetoric, it requires conscious and active commitment and investment to that end.

The city will need to continue to engage the private development community, working with property and business owners as they make their own investments in response to the transformation of the public realm. Retail storefronts, pedestrian landscapes and office buildings that line the new waterfront all need to offer the same level of vibrancy as the revitalized public right of way.

We are off to a strong, collaborative start, gathering the voices of many perspectives — all bringing us to the brink of positive changes. This is a moment that will define who we are in our own cityscape, as well as how we are seen from beyond as leaders who not only believe in social betterment but know how to make it happen. It’s go time.