Old industrial area becomes a destination along the Columbia

It’s easy to look at The Waterfront Vancouver today and forget what once was: An old paper mill, with a railroad track that separated downtown Vancouver from the Columbia River, and no public access to the largest waterway in the Portland metropolitan area.

What isn’t easy to forget is the years needed and the numerous people that invested time in making this project a success.

Thirteen years were spent in meetings between members of the investor group, Columbia Waterfront LLC, and the city of Vancouver, as well as a long list of government agencies including those who specialize in waterfront projects. The team involved wanted to ensure that we weren’t just building a commercial development, but a destination.

We knew whole-heartedly that we had the opportunity to impact Vancouver for generations to come and we didn’t approach that responsibility lightly. 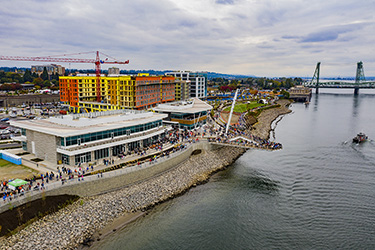 Images from Gramor Development [enlarge]
A cable-stayed pier at Waterfront Park juts nearly 100 feet over the Columbia River without any in-water support.

Century in the making

As is the case for many waterfront redevelopments across the country, the land along Vancouver’s waterfront, which borders the Columbia River, was an unfriendly industrial area. For over a century this sprawling riverfront location was inaccessible to the public, separated from downtown Vancouver.

For some history on the site: In 1905, a sawmill opened on the shore just south of downtown Vancouver, followed by a massive shipbuilding operation in 1918, which was converted to a paper mill in 1962.

All these industrial uses eventually made downtown Vancouver less of a livable community, and most of the Vancouver residential growth occurred north and east of downtown. The city started an effort in 1990 to reverse this trend in the downtown area by sponsoring the Hilton hotel and convention center, rebuilding Esther Short Park and subsidizing the conversion of the Lucky Lager brewery into apartments.

The last piece of the industrial uses and separation from the Columbia River remained until the paper mill closed in 1996. This opened the door for the redevelopment of downtown Vancouver’s most valuable amenity: the riverfront.

In 2005, Boise Cascade offered the 32-acre property for sale. I recognized the unique potential of this site and set out to explore the possibilities of redeveloping it. To tackle a development of this size and scale, and to do so successfully, required a team of professionals from diverse backgrounds, which led to the formation of the Columbia Waterfront LLC. The then newly formed company put the property under contract and began a 4-year process of finalizing a development agreement with the city of Vancouver.

In 2008, the 32-acre site was acquired by this investor group so it could continue the singular vision it had in mind: return the title of “Gateway to the Pacific Northwest” to the shores of Vancouver. The group worked closely with public planners, financing entities, city and Port of Vancouver leaders, as well as local residents, to create a master plan for development.

The initial plan for the $1.5 billion development was approved in October 2009. This plan includes 3,300 urban residential units, 1.5 million square feet of office, retail and restaurant buildings and the waterfront park.

It takes a village

While the formation of the partnership and purchase of the land was an incredible first step towards turning our shared vision into a reality, there were still many obstacles that needed to be overcome.

For one, the site had no infrastructure. It took thousands of hours of meetings, planning and a significant investment from Columbia Waterfront LLC and public entities to bring the basics — water, electricity, roadways and a public park — to the site.

One of the most significant modifications was to reroute the train tracks that separated the waterfront land from the downtown core, including the creation of two new access points on Grant and Ester streets. If the $1.5 billion development was separated from the balance of downtown by a train track, it would never truly feel like a part of downtown, nor would downtown benefit from the development.

It took the proverbial “moving of a mountain” to relocate a railroad and I will always be grateful for the efforts and cooperation needed from the city of Vancouver, the Port of Vancouver and Washington Department of Transportation Rail Division to make this critical part of the vision a reality.

To create a first-class urban destination and not just a disconnected collection of high-rise buildings, Columbia Waterfront LLC donated over 7 acres and a half-mile of waterfront land, valued at over $15 million, to be used specifically for a world class park. 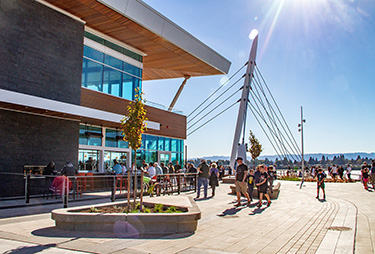 [enlarge]
This plaza will be one of several public gathering areas along the Columbia.

Design leadership from the development team and coordination between private and public entities has resulted in outstanding quality for the development’s Waterfront Park, as well as the extension of the Columbia River Renaissance Trail — a stretch of riverside trail already used by over 800,000 people a year.

In addition to major local architectural and engineering companies that designed streets and buildings, the development team spanned national and international partners. Those included PWL Partnership Landscape Architects of Vancouver, B.C.; Larry Kirkland, a renowned public artist with numerous notable monuments in Washington, D.C.; and Fisher Marantz Stone, designers responsible for lighting some of the largest and most iconic structures in the world.

The Waterfront Vancouver represents why cities across the country are investing in the redevelopment of their waterfronts through relationships with private investors: To bring new places and experiences to local residents, expand businesses and welcome visitors, improving their community for generations to come.

Today, The Waterfront Vancouver is open and home to thriving restaurants, apartments and businesses, including Twigs Bistro and Martini Bar and WildFin American Grill, which are setting economic performance benchmarks for downtown Vancouver.

This collaboration and partnership between private and public entities can be a magnet for investment. As stated in a study from Johnson Economics in 2012: “The Vancouver Waterfront project represents the most viable opportunity for the state of Washington to benefit from the economic activity in the broader Portland-Vancouver metropolitan area.”

The present value of the tax contributions from the development over a 20-year period would be over $382.6 million for the state and local jurisdictions. Additionally, employment at The Waterfront Vancouver is expected to total over 10,000 jobs when considering both construction labor and ongoing business needed to bring the project to life.

However, the numbers only tell part of the story. The true success of The Waterfront Vancouver can only be measured in the eyes of the community. If they connect with this place and are proud to live, work and visit, then we have done our job well as development partners.

Barry Cain owns and directs Gramor Development, a commercial retail real estate company responsible for the development of more than 65 retail and mixed-use projects in the Portland-metro area valued at over $1 billion.
Sponsor