By MAGGIE WALKER and HEIDI HUGHES
Friends of Waterfront Seattle

Seattle’s waterfront, like its industries and its workers, is evolving. Now that the viaduct has been traveled for the last time, its noise and dirt have stopped. Soon, the structure itself will disappear, allowing sunlight onto a waterfront newly connected to the downtown core.

We’ve always known this was going to be an extraordinary opportunity for our city, and we’re committed at a high level: Friends is the nonprofit partner created as part of the city’s waterfront strategic plan to help build and manage the new park spaces. We are raising philanthropic funds to help construct the park and provide free community programming for all users, and will work with the city Parks Department to maintain the park when built.

With local improvement district funding in place, construction is imminent and we are getting an even clearer picture of how the new central Waterfront Park will benefit the region.

Our continued economic growth depends on our ability to anticipate the needs of future generations of workers and industries, and Waterfront Park is an important element of that. It’s been fascinating to see how other cities nationally are benefiting from similar projects. 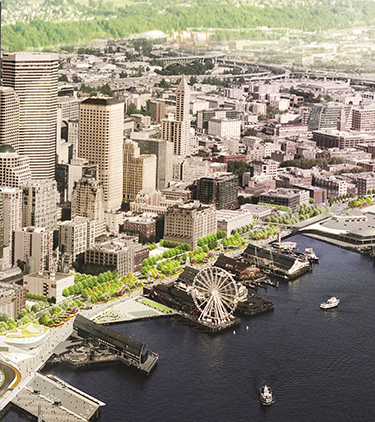 Knowledge-economy workers choose to work where they want to live, and that tends to be in dense, walkable and vibrant mixed-use environments. Projects like The High Line, Brooklyn Bridge Park and The Yards Park have been a boon to residents, workers and visitors.

Seattle’s timing could not be better. Once Waterfront Park is complete, it will:

• Attract people from all over. The emerging Waterfront District won’t just be a nice place for downtown residents, but an asset to the whole region. With a concentration of small businesses, a new park offering music and cultural activities, space to run, bike and play, the waterfront will attract people from across the region and the state.

• Support and attract downtown residents. People of all ages and stages of life are choosing to live downtown, and downtown residents keep a city vibrant by supporting large and small retailers, restaurants and cultural activities. Children under 18 are the fastest growing downtown demographic, and a high percentage of lower-income residents live within walking distance of the waterfront: 42 percent have incomes under $35,000.

• Retain workers and businesses in the core. Investments in signature urban spaces like the new waterfront help attract and retain workers, especially knowledge workers. These workers aren’t just in tech — they are essential to other established industries such as aerospace, advanced manufacturing, agriculture and trade.

• Provide investment returns to the city. The plan for the waterfront was intentionally diversified with funding from the state, city, port, property owners and philanthropists. This means we can have a great waterfront without sacrificing other city priorities. The large initial economic impact of construction activity will be followed by hundreds of millions of dollars in ongoing economic impact over the years, as well as thousands of jobs and millions of dollars in direct taxes.

• Expand opportunities to small businesses; celebrate Seattle’s many cultures and partner with social service agencies. Friends is working to ensure this large public project benefits the entire community. For example, we’ll be helping lower-income entrepreneurs establish their Waterfront Park-based businesses. Through partnerships with organizations like Ventures, Friends will provide access to affordable space, business training and micro-loans. Small businesses are the heart of job growth, and it is essential that we make sure everyone can get on that economic elevator.

Diverse groups will also be engaged in cultural, educational and recreational programming so that visitors can experience Seattle’s cultural vibrancy. To keep these goals central to our work, we will expand our organization and diversify our leadership to reflect all Seattle’s communities and cultures.

Those who are watching the waterfront are seeing the physical transformation: the tunnel construction, the viaduct demolition, the MarketFront expansion. Over the next four years, we’ll also see the construction of Waterfront Park: The Overlook Walk connecting Pike Place Market to the waterfront and restoring viaduct views; Seattle Aquarium’s new Ocean Pavilion with its “sharkulus”; and new trees, bike paths, bioswales, benches and playgrounds.

But just as it takes people to make a house a home, our park won’t fulfill its purpose until it’s filled with people.

This has already started. Friends has been activating the existing waterfront during summers since 2015, and we have employed a three-pronged approach to keeping it welcoming and lively. First, we attract people to the space by bringing an abundance of programming and events; second, for those residents who are experiencing homelessness and addiction, we are meeting them where they are; and third, we engage law enforcement as appropriate.

We get many questions about that second element. For several years, we have been engaged with Law Enforcement Assisted Diversion (LEAD) to help those in need. By pairing LEAD with our summer programming, we have seen a 30 percent decrease in arrests and citations and a 40 percent increase in attendance at events. This is crucial validation for our approach of honoring all people who come to the waterfront, and we look forward to scaling up this work year-round.

Our waterfront is truly going to be Seattle’s front porch. As a place for recreation and restoration for those near and far, as a place of economic opportunity and as a legacy to our city, our waterfront will improve both stability and growth for our entire region.

Maggie Walker is board chair and Heidi Hughes is executive director of Friends of Waterfront Seattle.
Sponsor