Connecting a waterfront landmark back to the city

Nestled among an abundance of shops and restaurants along the historic Seattle waterfront — including the legendary Ivar’s Fish Bar — you will find Seattle Fire Station 5. This popular fire station welcomes tourists and citizens alike and is the home port of the 108-foot fireboat Leschi.

The fireboat was named after Chief Leschi, who was a war chief of the Nisqually Tribe. It is described as the “dreadnought of Seattle’s fireboat fleet.”

With the viaduct demolition underway, downtown views of this Seattle landmark will be revealed and visitors are expected to increase. Recent renovations of Fire Station 5 make it readily available for the influx of foot traffic.

A mid-century modern beacon on Seattle’s central waterfront, Fire Station 5 is a distinctive and recognizable fixture along this bustling promenade. As one of the busiest stations in the city, Fire Station 5 provides key services for a substantial part of the Seattle Fire Department’s downtown service area. As a base for landside and waterside response and rescue, the boats and gear for marine operations are unique aspects of this station. 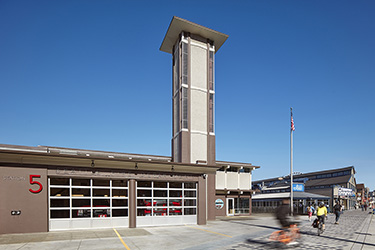 Photos by Moris Moreno [enlarge]
Open and inviting views into the apparatus bay create a transparent connection to the community. 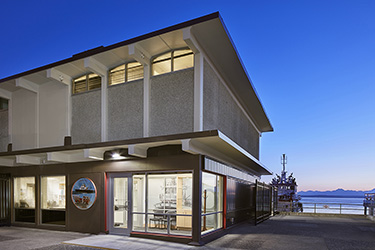 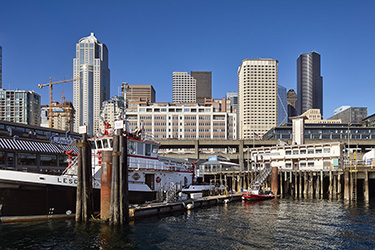 [enlarge]
The offshore side of the station is the home port to the fireboat Leschi.

The main impetus of the renovation was a seismic upgrade and increased disaster preparedness. However, the design took into consideration the unique relationship between the station and the public.

As one of the most frequently visited fire stations in Seattle, the firefighters constantly engage with the community. Visitors drop in to tour the facility and learn about the on-site equipment. Children delight in the fire trucks and fireboats. The inviting views from Alaskan Way into the apparatus bay, foyer, office, and to the waterfront beyond create a welcoming and positive connection to the community.

“This is one of the stations that’s the pride of the organization,” said Seattle Fire Chief Harold Scoggins.

Fire Station 5 is a notable example of mid-century modern architecture, and a designated Seattle landmark. As a result, interventions needed to be sensitive to the building’s original character-defining features.

In addition, at 6,000 square feet, the fire station has a substantially smaller footprint than the current Seattle Fire Department standards, requiring an efficient and creative design solution. While Fire Station 5 relishes visitors, the station was not laid out to efficiently accommodate guests and keep operations of the station separate.

Working closely with the Seattle Landmarks Preservation Board, Bassetti Architects proposed an infill that increased the building’s footprint without significant impact to the exterior. The increased floor area allowed for inclusion of an onsite physical training room and a more transparent and welcoming entry for the public.

A graphic memorializing a 1927 fireboat, previously housed at this site, summons visitors from the community into the space by engaging them with the history of the fire station.

Strategic reorganization of the station’s layout supports operational efficiency. The first-floor areas available for public tours include the apparatus bay, offices and maintenance areas. Private crew spaces are on the second floor. By providing open and inviting views into the apparatus bay from the main pedestrian and vehicular thoroughfare, a more transparent connection to the community is created.

Some of the strategies used to support the city’s strong environmental sustainability ethic include photovoltaic panels and solar hot water heating. The rooftop panels are clearly visible as ferries enter Colman Dock, demonstrating the city’s commitment to renewable energy. This allows passersby and incoming ferry riders to appreciate the green elements of the building.

Despite the building’s unique position over water, the implementation of high-performance windows and walls improved thermal characteristics of the envelope and dramatically increased comfort for firefighters.

The project is on track for LEED gold certification. This level of LEED certification will exemplify the city’s dedication to sustainability to visitors.

Due to other major projects adjacent to the station, including the seawall replacement, SR 99 tunnel operations, and below deck marine-based structural work, firefighters waited over three years for the renovation of this station. They were able to move back into the modernized station in May 2018, and were greeted with a freshly renovated building that is seismically upgraded and welcoming to the waterfront community.

Since this station was first built, the viaduct has always visually and physically separated the station from downtown. Demolition of the viaduct will allow the station to assume rightful connection to the reborn downtown waterfront, highlighting this station as a beacon of public safety for the city and its visitors.

People will have a more welcoming opportunity to learn about fire safety; children will be able to meet, become inspired by, and admire their local firefighters; and firefighters will continue to exhibit their hard work with offshore and onshore incident response.

Susan Conway is an associate at Bassetti Architects and was the project manager for the Fire Station 5 renovation.
Sponsor