These 3 Northwest projects show how listening to clients pays off

At Knot, whether we are working on embassies in sub-Sahara Africa or on parks in the Northwest, we hold firmly to the notion that great design fits beautifully within its context. Extreme sensitivity to cultural and environmental context is a key to achieving success.

We think like a large firm but act like a small one. We bring together diverse expertise and specialties in landscape architecture and experiential graphic design that allows us to collectively understand multiple scales of human experience, built craft and physical environment. The result is an informed approach to each project.

Over the years, as a landscape architect with Aecom in Seattle and Portland and now as principal with Knot, I have emphasized the need to be deeply invested in each individual client and project that comes through the office.

We have purposely built a diverse team both in discipline and background because we believe that broader understanding brings stronger solutions.

Three Northwest projects demonstrate our passion for interpreting a client’s goals and commitment to consider the natural environment as we impact the land around us. 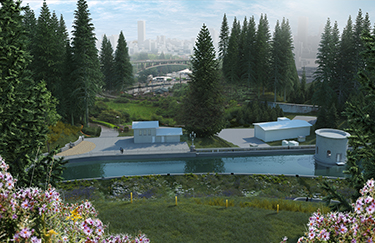 Rendering courtesy of Knot [enlarge]
Washington Park Reservoir upgrades in Portland came together after a two-year visioning and design process.

Portland’s Washington Park had outlived its 100-year lifespan when the Portland Water Bureau began the process for major reconstruction and restoration of public park features within the Washington Park Reservoir District.

The park is nestled in a wooded hillside overlooking downtown Portland. The site of an arboretum, amphitheater and rose garden, the 410-acre park also plays an important role in the city’s water system.

The Washington Park Reservoir was in need of major improvements and reconstruction. Working with the Portland Water Bureau, I led a team of architects and engineers through planning for major park upgrades.

The project needed to preserve the beauty of the historic structures while deftly adding modern landscape features such as plazas and promenades in a seamless fashion. A two-year process led us through visioning and design conversations with the public, a community steering committee and the Historic Landmarks Commission — navigating the effort to add new park features and restoring historic structures.

This also involved working closely with park planners, landscape architects and engineers as well as contractor Hoffman Construction over a 2-year period. We continue to work with the Portland Water Bureau and Hoffman on this complex project. The design includes trail planning through environmentally sensitive areas as well as studying stormwater infiltration and habitat restoration, seeking a coexistence between historic and modern. 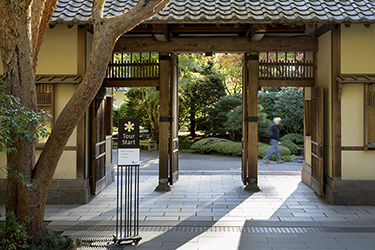 Former Japanese Ambassador Nobuo Matsunaga called the Portland Japanese Garden “the most beautiful and authentic” Japanese garden outside of Japan.

For Knot, the expansion of this beloved Japanese garden presented an opportunity to show how our wayfinding program can perfectly complement an overall design.

Custom signs were developed from pulling the architectural details and interior finishes. Larger sign structures appear weightless through the use of hidden fasteners. Knot’s designed focused on the highest level of craftsmanship, infused with traditional Japanese design.

The garden required a design response that showed reverence to centuries-old Japanese traditions. Knot’s wayfinding signage provides a critical role in the expansion — as visitors now can experience an even more immersive cultural experience through educational activities. With our wayfinding design guidance, the Portland Japanese Garden has expanded to serve visitors’ needs in the 21st century while carefully respecting traditional design cues from its inspirational homeland.

On the design of the Ridgewood View Park & Reservoir in Beaverton, Oregon, we worked closely with the Tualatin Valley Water District and Tualatin Hills Parks and Recreation District to develop a program for an 8-acre park.

The project challenged Knot designers to incorporate a series of uses in an elegant response to the clients’ and the public’s desires for a park that will host visitors of all ages. The design included a picnic shelter, rain gardens, a trail loop through a restored natural area, two bridges, a restroom, drinking fountains, bocce court and seating areas. The project also included construction of a new drinking water reservoir and pump station.

Through an extensive public input process, our designers participated in a series of public meetings to refine their design approach. A series of rain gardens were designed to manage all runoff from impervious surfaces, including the large roof of the reservoir tank.

The rain gardens descend from the roof of the tank through a series of concrete and Gabon ramps and connect with an at-grade system of gardens circling the site. In addition, 4 acres of degraded natural area were restored, and a new trail loop constructed. Two bridges were installed to bring visitors through the natural area and along the bank of a stream.

Atop the reservoir, Knot designed new tennis and pickleball courts — demonstrating the most innovative approach to delivering multiple functions for public use, while also meeting state and federal requirements for clean storage of reservoir water.

For its sustainable design and construction, the park was awarded the Institute for Sustainable Infrastructure’s Gold Envision rating — making it the first project in Oregon to receive the award. Weaving a multitude of public uses into a complex, sustainable-design program, Knot demonstrated that a reservoir and park can be extremely functional while also beautiful.

With each of these projects, our team members sought out many perspectives in order to align ourselves with our clients’ goals.

As a landscape architect, I place great emphasis on being a good listener. In fact, I spend a lot of time thinking about the right questions. I think the answers are the easy part. Being able to use design as well as verbal and visual communication to bring a group into agreement is deeply gratifying.

Marilee Hanks, owner and principal at the Portland landscape architecture/experiential graphic design firm Knot, is passionate about shaping the human experience of place and reinforcing the natural systems that sustain us.