Why electric scooters could be a game changer for Seattle

A westward walk from First Avenue to Alaskan Way has recently been transformed with the removal of the viaduct along Seattle’s waterfront, opening up unobstructed views of Puget Sound from areas previously blocked by this seismically susceptible concrete structure.

Built in the 1950s to facilitate unimpeded access throughout the city for personal automobiles, the removal of this car-centric infrastructure allows Seattle to reconnect areas of the city with a new public promenade along the waterfront.

As Seattle takes strides to provide pedestrian-friendly urban environments, the ultimate success of these projects will depend on their connectivity. Micromobility options including electric scooters, and a supporting infrastructure, hold the potential to be the next game changer in our cities, reshaping urban centers and transforming the way we commute. 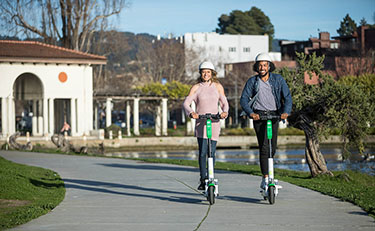 Lime photo [enlarge]
In 2018, 38 million electric scooter trips were taken in the United States, yet scooters have prompted a range of reactions and emotions among urban dwellers.

Over the past few years, cities around the world have seen an influx of rentable, dockless electric scooters. As people look for ways to move around increasingly congested cities, scooters have become a popular, alternative transportation option. They take up less space than cars and bicycles and are a more efficient option than walking.

In 2018 alone, over 38 million electric scooter trips were taken in the United States, according to the National Association of City Transportation Officials. Yet the electric scooter has prompted a range of reactions and emotions among urban dwellers.

Some fondly reminisce about their childhood “toy of the year” Razor scooter with a newfound use in their daily commutes. Others express recalcitrance by setting them on fire, tossing them off buildings and even throwing them in the ocean to demonstrate against urban clutter and risk to pedestrians.

Change ahead for scooters?

Due to ongoing resistance toward electric scooters on Seattle’s streets, the city has been late to the game in setting regulations that would effectively introduce scooters throughout the city. However, this may change in the near future.

In mid-August, Seattle’s Department of Transportation initiated a plan to begin a public engagement period as part of a three-stage initiative to introduce electric scooters in Seattle. As this multi-stage process begins, it is important to gain perspective from once-emergent transportation technologies that have also produced contentious arguments around their use and integration in our cities.

Beginning with our two feet, modes of transportation have long defined our cityscapes, and perhaps more importantly, our understanding of them. Mode of transport articulates exactly where people can and cannot live in relation to work and commerce.

Prior to World War II, dense downtowns were connected to one another by high-capacity railways radiating outwards with subways, elevated trains and electric streetcars to connect their urban cores. This mix of transportation options produced relatively high-density apartments in large cities and helped to decrease the amount of unsanitary tenement housing developed prior to these transportation innovations by providing additional housing options a short distance from city centers.

Fast forward to the 2000s. Automobiles have become commonplace in contemporary cities; their sounds, smells and uses permeate our sensory experience of our cities. However, this was not always the case.

The car began as a toy for the wealthy elite, used to reach their country estates and travel to getaways outside the city. Yet, at the time of their introduction, cars provided a very poor means of basic transportation to and from city centers due to a lack of accompanying infrastructure. As a result, commuting by car was not much more convenient or expedient compared to existing mass transit options in most U.S. cities.

Despite this increase in car ownership (alongside outcries against the car’s desecration of the city), it wasn’t until the advent of another innovation — the expressway — that the car became adopted en masse. The expressway enabled large numbers of people to travel long distances on a daily basis, facilitating commutes of up to 20 miles in 30 minutes and enlarging the potential size of cities to more than 1,250 square miles.

While changes in transportation technology from the mid-19th to the mid-20th century continuously reshaped American cityscapes, since the 1950s not much has changed with regards to transit. This is problematic since cities continue to grow as millennials express increased interest in moving back to urban areas.

Highways have become overcrowded with highway expansion being expensive and, in many cases, infeasible. Around the country, and particularly in Seattle, commute times continue to slow as congestion increases.

New forms of mobility are continuously being adopted in our ever-changing cityscapes. This makes mobility an important challenge with which architects and designers must grapple.

With the electric scooter providing a new form of mobility, it is imperative for us to embrace this technology and the change it could bring to how we think about urban spaces. We need to be open to reconsidering architecture and urban design in the 21st century. If the expressway enabled the rise of the automobile, what urban design innovation is needed to bring about the rise of the electric scooter in our cities?

This is a critical question for many stakeholders — architects, urban planners, policy makers, legislators, and academics — to consider. In the meantime, Seattle has an opportunity to catalyze the scooter’s adoption. With impending legislation regarding the scooter, Seattle has a first chance to embrace this mode of transit and begin the process of reshaping its urban fabric. This time, in a much smaller, walkable and “scooterable” way.

Garrett Reynolds is an architect at Bohlin Cywinski Jackson in Seattle. He was the 2015 recipient of AIA Seattle Emerging Professionals Travel Scholarship for his proposal to study small dwellings in dense, urban contexts and continues to engage questions of livability within our cities.