On display at the Burke: a new model for museum design

The new Burke Museum of Natural History & Culture only moved about 400 feet from where the previous facility stood for 55 years, but it represents a bold progression in museum design.

Tom Kundig, principal and owner of Olson Kundig, designed the new Burke Museum. As a UW student, Kundig knew the original Burke as an introverted campus building. Its prime location at the northwest corner of campus aspired to link the UW with the surrounding community. Instead the museum’s architectural language turned inward, its entrance hard to identify and the surrounding parking lot uninviting.

When he interviewed for the project in summer 2009, Kundig was already envisioning a building with a more significant presence. Reorienting the Burke along the site’s 15th Avenue edge, he reasoned, would allow for a larger museum. The move would also create a new outdoor space for the Burke and surrounding UW buildings, and help the museum more directly engage with off-campus neighbors.

His ideas resonated with Burke Museum Executive Director Dr. Julie K. Stein, who dreamed of a facility that displayed more of the museum’s collections and operations. Stein’s vision for the new Burke established two parallel agendas: an open and inviting “inside-out” museum where delicate artifacts would still be protected and safely stored.

“We had to do more than just build a bigger box with good air conditioning,” Stein says. “People’s reactions to going behind the scenes are magic. We had to do something to create that magic for everyone who visits the Burke, not just the select few who get a behind-the-scenes tour.” 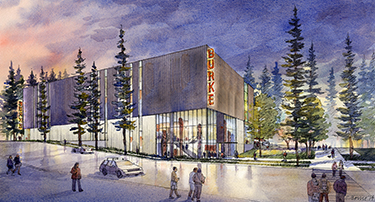 Despite a clear guiding vision and community support, the new Burke Museum progressed slowly for several years. Mary Dunnam (a past president of the museum’s board) and Ellen Ferguson (co-chair of the campaign for the New Burke) helped Stein shepherd the project through bureaucratic hurdles and funding freezes.

“It got dicey, but they were never rattled,” Kundig says. “The tireless perseverance and optimism of these three women is the reason this museum exists.”

After nearly a decade of work — spanning design, fundraising, construction and methodological transfer of the Burke’s collections — the new facility opens to the public on Oct. 12.

The architecture of the Burke Museum merges quiet form with ultra-efficient function. Simple floor plans provide 66% more area for ongoing research and display of the museum’s 16 million artifacts, with controlled areas for sensitive pieces or items not available for public view. Each space is designed for flexibility, giving the museum the ability to adjust to the changing needs of its inventory.

“As an active collection museum, the Burke is moving and growing all the time,” Kundig says. “So we designed its new building to be easy to rearrange and reorganize as collections grow and shift inside, as well as for potential future expansion.”

Throughout the museum, traditional barriers between museum visitor and researcher are dissolved; instead almost every part of the Burke’s ongoing work is exposed as part of a holistic visitor experience. Research labs, which allow visitors to engage directly with working researchers, coexist across the museum with display collections by exhibit designer Evidence Design.

Extensive collaboration with tribal and indigenous communities throughout design and exhibit planning — including a Native American advisory board made up of statewide tribal leaders — helps this increased public access to collections remain respectful and culturally sensitive.

Kundig calls this a “Swiss cheese” strategy: “We’ve poked holes into various parts and pieces of the Burke,” he says. “But there are still opaque, protected areas for pieces of the collection that it isn’t safe or appropriate to display.”

VIEWS OUT, VIEWS IN

The Burke Museum hopes that allowing guests to take part in the process of scientific discovery will inspire them to consider their own personal connections to the natural world. The building provides opportunities to make these connections literal. From the cafe, a 24-foot-by-20-foot pivoting window wall opens directly onto the new Burke Yard. Led by Shannon Nichol of Gustafson Guthrie Nichol, the Burke Yard provides a multipurpose event space and thousands of native plants, revitalizing the site of the old Burke.

The building’s exterior design centers the Burke Museum within its cultural and environmental context. The Burke’s sloping roofline nods to a shed roof as it follows the topography of 15th Avenue Northeast, linking the building to its surrounding landscape. Tall, narrow windows echo the straight vertical lines of cedar and fir forests across the Pacific Northwest. The sustainable Kebony siding recalls the traditional houses of western Washington’s native communities and will similarly silver as it ages.

Visual transparency enhances the Burke’s connections to the surrounding community, as well. From the museum’s interior, large windows provide views out to the University District landscape, allowing visitors to orient themselves as they progress through collections. Dual entrances open to both the campus and city, explicitly welcoming both populations.

Likewise, views into the museum from the street expose the ongoing work of the museum to passersby. This porous visual exchange helps to reestablish the Burke — the state’s oldest public museum — as a public asset. It’s also an effective way to draw guests through the door, already anticipating increased pedestrian traffic when the U District light rail station opens in 2021.

“I think of the Burke as a natural history library where you can peek through the window and see what’s on the shelves,” Kundig says. “You see something cool, so you come inside and have access to the items that interest you. From there you make connections to other areas of study also housed within the museum. The Burke empowers you to follow the threads of your own curiosity.”

Cate O’ Toole is a marketing coordinator at Olson Kundig.