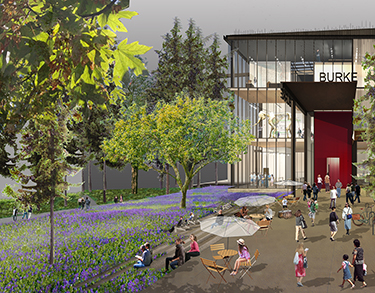 Image from GGN [enlarge]
The south edge of the Burke Yard creates a welcoming gathering place in front of the museum’s east entry in this early rendering by Olson Kundig. A series of seat steps, facing toward the campus, overlooks the Camas Meadow.

A unique myriad of colorful, fragrant and flavorful plants are richly intertwined into the indigenous culture, food, art, health and festive traditions in Seattle and our region, as they have been for thousands of years. Oddly, this beauty and wealth of botanical knowledge and artistry is seldom made available to us in the mass-produced landscapes and gardens that are now common in the Pacific Northwest.

“The new Burke presents the rare opportunity for people to see and experience a sampling of these garden-worthy, useful plants and of the millennia of ethnobotanical connections between people and these plants,” says Shannon Nichol, founding principal of GGN and landscape architect of the new Burke Museum.

“Eighty-thousand native plants are in the midst of being installed at the new Burke. Seventy-thousand of these were specially grown by Oxbow Farm & Conservation Center for this project,” says Bridget McNassar, native plant program manager at Oxbow.

Most of these plants were propagated by seed, which was collected locally by hand. Local seed propagation — as opposed to tissue propagation, which is usually faster but creates genetically identical clones — imbues the new Burke’s plants with rich genetic diversity and adaptive resiliency, ensuring optimal performance over the long term on this urban, Central Puget Sound lowland site. For example, much of the camas seed was collected on a small island in the San Juans and sown at Oxbow in 2015.

“These seed-started bulbs have been slowly increasing in size over the past four growing seasons and are ready now to be planted at the Burke, where they will showcase not only the rare and beautiful ecosystem from which they hail, but also their thousands of years of cultural importance,” says McNassar.

When Olson Kundig proposed relocating the Burke Museum from the center of its site on the University of Washington campus to the very edge of 15th Avenue Northeast, the opportunity was suddenly created to introduce a new quad within the existing campus.

The Burke’s building had long occupied the center of a large site at the northwest corner of campus, skirted by a donut of parking and drive lanes. By relocating the new Burke Museum to the edge of this same site, the architects opened up the site’s significant central space. The new Burke Museum both frames and activates that central space, which is called the Burke Yard.

FRAMEWORK FOR THE FUTURE

GGN’s design of the site continues this long-term view toward formatting the bone structure of a future quad around the new Burke. Clear borders around the square Burke Yard will physically guide the location of any additional buildings, aligning them around the protected open space with strategically placed retaining walls.

Today, the Burke Yard is enclosed in the tradition of any quad, but instead of buildings, the enclosure is provided by a tall frame of restored, second-growth forest, newly planted Douglas fir trees and the new museum building itself. 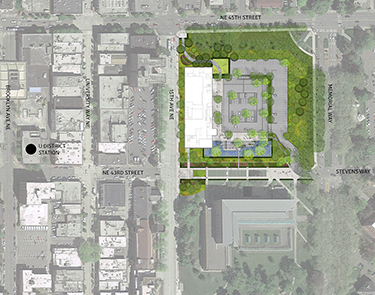 Image by GGN [enlarge]
Key features of the site plan are the building’s activation of 15th Avenue, the preservation of mature trees along 45th Street and Memorial Way, and a new gateway into campus along Stevens Way.

The Burke Yard is nearly level. This simple, square “floor” is carved from the previously sloped site as if the floor of the museum was pulled out like a drawer. This allows universal access, flexible programming of the Burke Yard (from parking to events) and adaptability over time toward more frequent or complete pedestrian use of this valuable open space.

While the north edge of the Burke Yard is carved into the slope, the south edge, which brings people to the museum’s east entry and cafe, perches above the adjacent 43rd Street/Stevens Way walkway into campus.

“This long-quiet walkway will soon be rediscovered as the arrival point for thousands of people coming from the new light rail station a couple of blocks to the west,” says Nichol.

The lifted south edge of the Burke Yard is designed as a social overlook, in the form of a series of seat steps facing toward the campus walkway activity. The seat steps also offer each passerby a strong visual cue of entry and welcome — an informal take on the grand steps that announce the entries of traditional museums.

“Perhaps most importantly, these seating steps are a place where people can enjoy the living colors, fragrances and relationships of our region’s beautiful indigenous plants,” says Nichol.

Wrapping around and extending from the seat steps is the Camas Meadow, planted with 15,000 camas plants, which will provide a stunning annual display with early spring bloom of blue-violet. Camas is a central feature in indigenous traditions of food, landscape cultivation and the celebration of the seasons. Camas flowers provide vital early-season pollen and nectar for pollinators, which will animate the meadow.

McNassar adds, “Three species of native grasses, while forming soft drifts of color, also serve as host plants that feed the larvae of insects, which in turn form the basis of the food chain in our region. Many other species of plants are included in the Camas Meadow for year-round interest, gardening inspiration and a full-color experience of our region’s once-prevalent, lowland-prairie landscape.”