Burke’s dream of an ‘inside-out’ museum comes together

On Oct. 12 the Burke Museum will reopen in its new building, a state-of-the-art museum and research center on the University of Washington campus. Architecturally and interpretively, the new 113,000-square-foot facility blurs the traditional lines between labs, collections and public gallery spaces towards a destination that invites the public to share the knowledge and activities of the Burke and celebrates the nature and culture of the Pacific Northwest and beyond.

Observing visitors’ responses to behind-the-scenes tours sparked Executive Director Dr. Julie K. Stein and her team on a 10-year journey to a build a new facility that reveals Burke research and collections, and connects visitors to the staff and volunteers who use them to learn, generate knowledge, find inspiration, experience joy and heal. 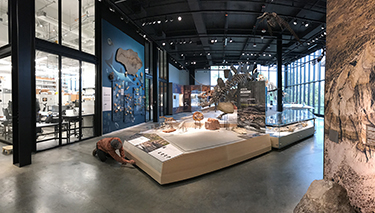 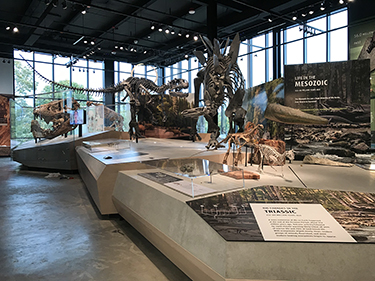 Photo by Evidence Design [enlarge]
Large walls of glass give passersby a peek into the Fossils Uncovered Gallery.

An unwavering commitment to “turning the museum inside-out” led the Burke Museum to build a radically transparent and accessible new facility featuring 12 visible labs and workrooms, six galleries and two classrooms, as well as play spaces for young learners and alcoves for flexible programming. These interwoven spaces and transparencies dispense with the traditional lines of front and back-of-house to establish the Burke as a new kind of museum.

To realize its ambitious dream to build an inside-out institution, the Burke Museum tapped consultants Walt Crimm Associates for facility planning, Renate Group who made great strides in defining the Burke’s re-imagined identity, and Olson Kundig for architectural design. In 2014, the Burke engaged Evidence Design to develop the programming of public spaces in the building and to execute interpretive planning and exhibition design of the visitor experiences.

This diverse team took on the challenges of transcending museum norms to stay true to the vision at every step of the process including space planning, architecture, exhibit design and interpretive design, as well as prototyping to test the concept along the way.

Each consultant collaborated with the Burke team and built upon the work of others. In the early phases, Olson Kundig, Walt Crimm and Renate worked closely with Burke staff and leadership to develop the overall build forms, facilities space planning and the initial inside-out interpretive direction.

When Evidence Design joined the team during schematic design, the interior organization of functions and public spaces were yet to be fully programmed. Our first task was to explore the degree to which this inside-out philosophy would shape the interrelationships among the workings of the Burke and public spaces. Through workshops with the Burke’s curatorial, educational, marketing and development departments, we presented a spectrum of integration models that represented degrees of intersection between the back-of-house activities and public interpretive and experiential spaces.

After lengthy dialogue, the Burke committed to a high level of integration between labs and collections, exhibit galleries and experiential programming spaces. Another key aspect of this spatial programming exercise included our recommendation of continuous vertical public circulation in order to tie the public spaces together in an intuitive and visible way. This approach would allow guests to have a sense of the entirety of the Burke and to navigate their options the moment they enter the building.

Evidence Design then shared the resulting interior programming model with Olson Kundig, who iterated the interior architectural design, including a slot canyon-like central stair and circulation space that was crossed by bridges and open to galleries, programming spaces with visible and flexibly accessible labs, workrooms and collections spaces distributed along the main visitor paths. As such, the architectural implementation of the interpretive planning led to public exhibit galleries taking on characteristics of labs and collections, while traditional research spaces inherited exhibit-like qualities. 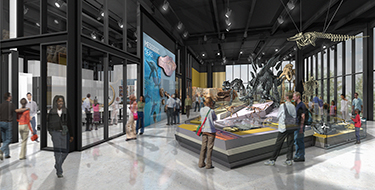 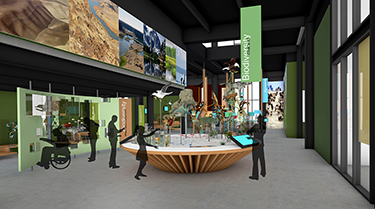 Rendering from Evidence Design [enlarge]
A cladogram exhibit is central to the Biodiversity Gallery.

For the public exhibit galleries, Evidence Design worked with Burke to develop diverse encounters that connect scientific discoveries and cultural connections to the adjacent collections and research that make them possible. For example, in the Biodiversity Gallery, visitors will encounter a three-dimensional “tree of life” populated by an extraordinary array of specimens that emerge from their evolutionary positions embedded in the table. The exhibit demonstrates the majestic logic of life itself — the result of the diligent work of scientists and the tremendous importance of collections and research that visitors to the Burke will see in action for themselves.

Meanwhile, the Burke exhibit team developed a prototyping strategy to test the relationships between the visiting public and the ongoing and now visible work taking place at the museum. The totality of these combined programming and design efforts resulted in the following set of integrated spaces and experiences:

LABS: Through large windows visitors witness museum activities such as specimen preparation, photography of cultural objects and fossil preparation. Staff will update flexible signage that chronicles the work of the day. Large sliding glass doors can be opened to allow the public to interact with experts and collections.

COLLECTIONS SPACES: Walls of glass provide views into the Burke’s rich holdings of specimens and artifacts from local and global cultures. The collections include changeable interpretation to engage visitors in the activities they see happening within.

LEARNING ALCOVES: Flexible educational programming spaces are tucked in between thematically adjacent labs, collections and exhibit galleries on each floor. They can accommodate up to 25 students and engage family groups when classes are not in session.

CIRCULATION SPACES, MICRONICHES: Wide corridors, openings between floors, stairwells and microniches or small artifact cases scattered like a string of pearls throughout the building provide opportunities for unexpected encounters.

The new Burke Museum embodies a holistic, intentional design that realizes the vision of an “inside-out” museum. This achievement is the product of the strong collaboration between interpretive and architectural designers, informed by a clear vision provided by the Burke. The result is a new institution that enables the new Burke to protect and share collections that constitute the natural and cultural heritage of the people of Washington state, facilitate meaningful visitor engagement with Burke Museum research and collections, and create a valued public amenity that connects the community to the mission and campus of the University of Washington.

Jack Pascarosa, AIA, is a partner at Evidence Design, a museum planning and exhibition design firm based in Brooklyn, New York City.