In 1991, Ray and Mary Johnston set up shop at their kitchen table, starting their namesake architecture practice at the scale of their own block, remodeling numerous homes in their Northeast Seattle neighborhood.

Simultaneously, they designed new and renovated libraries around the region. These divergent project typologies informed one another: the grand gestures of public work emboldened the design of intimate residential spaces, while the provision of human-scale niches turned the voluminous common gathering spaces of public work into pleasant community living rooms.

The work gradually expanded to include townhomes and apartments, animal welfare facilities, offices and public utility facilities. Continuing to shape spaces on scales both personal and communal, JA thrived on the dichotomy of large and small. While many firms swiftly pivoted to a focus on larger-scale projects only, single-family homes and public works remain a core component of the practice, continuing to influence the human scale and creation of a sense of place for JA’s intentional foray into other project typologies like commercial and multifamily. 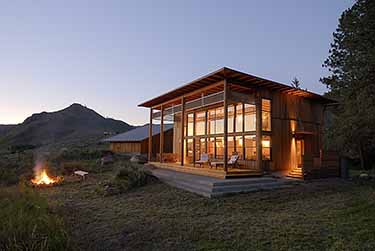 Photo by Will Austin [enlarge]
The Twisp cabin laid the groundwork for Johnston Architects’ DADU designs.

The diversity of projects is mirrored by the diversity of its team, infusing varied expertise and backgrounds into the practice — its designs all the stronger for it. The majority of JA’s team and leaders are women, an integral component of a culture of curiosity and shared goal of progression and collaboration, instead of competition.

The firm participates in the International Living Future Institute’s JUST program, placing heavy emphasis on equity and the cultivation of a rich personal life for each employee. Today, JA’s size — 30 people — allows open dialogue alongside growth and innovation; designers share ideas freely and new technology is embraced. Work on a range of project types allows unprecedented openness, encouraging a nimbleness that is the enemy of stagnation. The eclectic, work-at-all-scales culture survived the firm’s first 30 years and sets a foundation for the next.

JA’s work matured alongside repeat clients whose common-held values influenced its growth. We collaborated on numerous occasions with developer William Parks, who has a soft spot for properties that show the promise of a special view or nascent sense of place, but are troubled with steep terrain, abrupt zoning transitions, or tough proximities. Importantly, client and architect shared a vision for bringing people together and creating community. The team’s third collaboration was Boulders at Green Lake, which carefully sited nine single-family homes on a parcel meant for two. Despite the density, the homes are surprisingly private, a result of JA’s creative and strategic placement on steep terrain around a central, shared open space celebrating an existing pine tree.

Soon after, the Parks-JA team collaborated for their fifth time on the much larger Ballard Public, a 96-unit multifamily community arranged around a midblock courtyard, open to the sidewalk with street-fronting retail. The design began on a single parcel at the most abrupt zoning transition in the city, then expanded three times as adjacent properties were purchased and added to the project. The completed building is a mix of flats and soaring lofts with large windows evocative of an “Old Ballard” warehouse but with intimacy and community at its heart through a focus on common open spaces. It was honored as one of nine finalists for a 2017 People’s Choice Urban Design Award by Seattle’s Design Review Program staff.

While JA’s multifamily experience broadened, the richness of its single-family practice deepened, serving as an ideal engine for exploration and experimentation and paving the way for the application of novel technology.

In one of its most compact designs — a mere 860 square feet — JA carefully nestled a two-bedroom cabin with great room in the Methow Valley’s shrub steppe landscape above the town of Twisp. Inviting the outside into the double-height volume through soaring windows, the cabin leans into spectacular views of its surroundings, feeling much larger than it looks on paper. The Twisp cabin’s design combines intimate and expansive spaces, industrial and more finished materials, representing JA’s body of work writ large.

While conceived with the most analog considerations of human comfort and delight, the home set the stage for the launch of JA’s new DADU (detached accessory dwelling unit) technology platform that allows homeowners to modularly design and produce documents to take the step of building their own backyard cottage.

The last 30 years have made clear that memorable projects happen because of — not in spite of — the sites and programs that are challenging and stymie a one-size-fits-all solution. Whether maneuvering around existing trees, weaving communal space into a site with little space to spare, provisioning each unit with a slice of privacy and a special view, or puzzling into an irregularly shaped site, getting creative is the culture of JA.

It is vital to maintain openness and flexibility, as the future will bring more infill housing in denser areas on more challenging sites. From backyard cottages (DADUs) to boutique apartments snuck in between existing buildings, finding usable land to add housing in Seattle requires creativity and unorthodox thinking, as undeveloped sites are increasingly rare.

Looking ahead to the next 30 years, project typology will continue to vary, but JA’s values and approach will not: celebration of place, imbued with intimate, human-scaled spaces that draw people in. When applied, the urban fabric will be stronger for it, as idiosyncratic urban elements create the sense of place that communities crave.

Megan McKay joined Johnston Architects in 2006 and was promoted to partner at the women-owned firm in 2017.