With millions of Americans now stuck at home, cooking their own meals instead of going out to restaurants, it’s hardly surprising that the grocery industry is having an exceptionally profitable year.

So why, then, did QFC announce earlier this month that it plans to close two supermarkets in Seattle’s Wedgwood and Capitol Hill neighborhoods? And what of the University District Safeway that was recently bulldozed, or the Albertson’s in Magnolia that is slated to be demolished later this year?

For the most part, the reason for this spate of closures lies not with the stores themselves, but the buildings and land they occupy. These older squat, single-story structures, along with their massive parking lots, occupy acres of land that has skyrocketed in value over the last decade, particularly in the red-hot Seattle area.

And most of these older stores were designed for another era, with an almost singular focus on shoppers arriving by car. They sit far from the street, behind sprawling parking lots, and make little effort to accommodate pedestrians or bicyclists. The goal, when they were originally designed, was to get shoppers into the store and back out to their car as quickly and conveniently as possible.

What QFC, Safeway and other grocers already know is that these car-centric suburban-style grocery stores no longer make sense in an increasingly dense, multi-modal urban area like Seattle, where shoppers are increasingly likely to arrive by bike or foot rather than by car.

It’s time for something better.

GROCERY STORES AS A “THIRD PLACE” 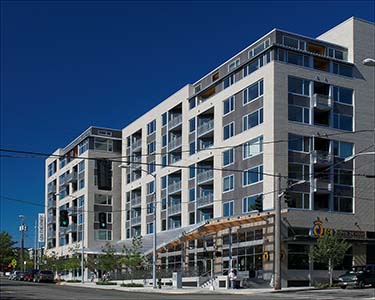 Image courtesy of Randall Corcoran [enlarge]
Ballard QFC after redevelopment. The store has a glass canopy that empties rain water into a glass bowl sculpted by local artist Rodman Miller.

Consider, if you will, the Angeline mixed-use project in Columbia City.

In 2014, developer Security Properties tore down a derelict former grocery store that had sat at the back of a large parking lot and replaced it with a mixed-use building that put five stories of housing above a 25,000-square-foot PCC grocery with two levels of parking beneath. The grocery store is oriented toward an adjacent park, instead of turning its back on it like its predecessor and opens out onto an outdoor dining area and covered bicycle parking. Instead of being rushed back to their cars, customers arriving at the new store were invited to gather and linger in this new semi-public space. And it worked: The outdoor seating area at the Columbia City PCC has become so popular that the grocery store has had to put out signs encouraging shoppers to limit their time at the tables to 30 minutes or less.

Similarly popular semi-public spaces can be found outside the QFC in Ballard and PCC in Fremont — both of which sit below several floors of housing — and have been incorporated into plans for the redevelopment of the U District Safeway and Magnolia Albertson’s. Many of these spaces are further enhanced by public art, like the glass canopy at the Ballard QFC that empties rainwater into a glass bowl sculpted by local artist Rodman Miller.

Having housing above also returns grocery stores to their rightful place at the commercial heart of a neighborhood, rather than a far-flung destination. Neighbors are more likely to cross paths, increased foot traffic draws in more small retailers and urban centers become more lively, attractive places.

Thinking about grocery stores like this, as a community asset rather than just a business, creates an opportunity to use development as a tool to truly improve a neighborhood. Much like the mom-and pop grocers that preceded modern supermarkets, these stores can become the “third place” that sociologists talk about: A shared space outside the work and home that anchors community life and serves as a catalyst for broader interaction.

In this way, grocery stores are among the most public of places, in that they offer a common space that almost everyone enters at least weekly, perhaps several times a week — far more often than we visit libraries, parks and other truly public spaces.

The decline of the traditional suburban-style grocery store is also an opportunity to build more sustainability into our food systems. Supermarkets, by their nature, are energy-hungry beasts, sucking up huge amounts of electricity to keep food at the right temperature so it doesn’t spoil. Under the first law of thermodynamics, all that refrigeration means that supermarkets put off tons of heat, which then goes up into the atmosphere.

It doesn’t have to be this way. A new mixed-use development planned for the site of the existing Magnolia Albertson’s will be among the first buildings constructed under Seattle’s Living Building Pilot Program, meeting the highest standards of sustainability and carbon neutrality. Instead of dumping heat into the atmosphere, a new Safeway on the ground floor will send its heat up into the residential floors above, where it will be used to regulate temperature. As a result, its energy use is expected to be 25% below code requirements, and no fossil fuels will be used for heating water and interior space.

New grocery stores are also being designed to take greater advantage of natural light from large windows — a break from the nearly windowless designs of older stores — as well as high-efficiency LED fixtures. Low-flow fixtures can be used to conserve water, and non-potable “greywater” can be treated on site and reused for toilets, cooling towers and irrigation. Angeline in Columbia City takes sustainability another step. The mixed-use project was designed with space for urban farming, allowing food to be grown, sold and eaten in the same space — with literally zero carbon emissions from transportation.

Can your grocery store do that?

Nicholas Simpson is a principal at Bumgardner Architects and is leading the redevelopment of the Magnolia Albertson’s as a Living Building Pilot Project with 138 units of housing over a new 29,500-square-foot Safeway.