It comes as no surprise that America’s retail sector is experiencing a host of profound challenges — from the ongoing and increasing shift from in-person to online shopping, to the simple fact that America is “over-retailed.” While the COVID-19 pandemic’s economic impact also has proved challenging, malls were struggling prior to the pandemic’s onset; the pandemic just forced property owners to consider new development strategies sooner.

Hundreds of department stores — once anchor tenants at shopping malls across the country — have closed their doors forever. Typically, large anchor stores account for as much as 30% of a mall’s square footage, and more than half of all mall-based department stores are estimated to close by the end of 2021. Across the United States, this demise of the anchor store is having a large impact on the health of mall properties. A quarter of the 1,000-odd remaining U.S. malls now look likely to close in the next three to five years, according to Coresight Research.

But all is not lost. The retail sector has finally awakened to this reality and is beginning to think critically about the future of the shopping mall’s purpose and potential. This transformation started with a movement to redevelop and repurpose department stores like Macy’s, Sears, JCPenney, Neiman Marcus, and other “big boxes” that permanently closed and were left “dark” and vacant. 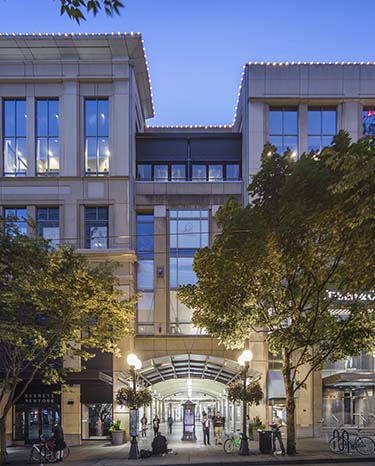 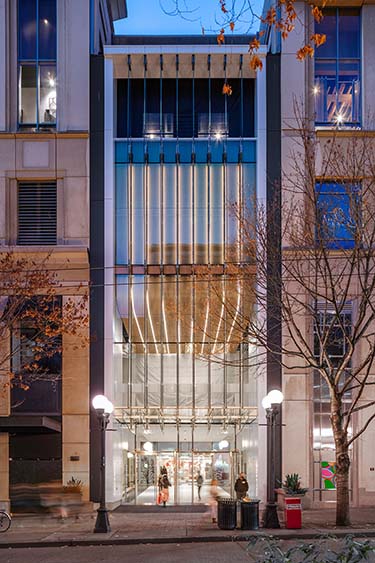 Photos by Heywood Chan/YE-H Photography, courtesy of Gensler [enlarge]
...and After

Owners of Pacific Place embarked on a two-year redesign project aimed to open the indoor mall to outside passersby.

Repurposing one vacant big-box store in a shopping mall is doable, and Magnusson Klemencic Associates has engineered many of these projects over the past five years. However, when two or three anchor stores — and even a host of smaller shops — at a single shopping center all close at once, it is time for property owners and developers to reconsider the approach.

One approach that retail architects and owners evaluate is full-scale “de-malling” and repurposing: broadening the functions of malls to include space for offices and residential apartments; reconfiguring store entrances to face the street or add open spaces providing large areas for community gatherings and events; and possibly even taking some of the large, empty spaces and turning them into distribution hubs, community centers, libraries, or indoor farming operations. Shopping centers can become destinations themselves, with shopping being the secondary attraction.

At MKA, we have seen demand for this kind of retail reimagining, and this trend has the potential to reposition and strengthen traditional shopping malls while reshaping entire neighborhoods.

Northgate Mall is one example of this trend. Deemed one of America’s first modern shopping centers when it opened in 1950, the 55-acre mall is located just 13 miles north of downtown Seattle along the Interstate 5 corridor. For nearly 25 years, it was an open-air shopping center before it was enclosed in the early 1970s. In 2019, three anchor tenants — JCPenney, Macy’s and Nordstrom — all closed their stores.

Recognizing the change in the market and influences by other development in the neighborhood (including new Link light rail transit connections to downtown), Northgate’s owner, Simon Properties, embarked on a “re-imagining” strategy. A phased redevelopment is underway to transform Northgate Mall and its surrounding parking lots into a mixed-use center with nearly 1 million square feet of office space, more than 900 residential units, and a hotel with more than 300 rooms. In addition, the development will include the NHL Seattle Kraken’s new 172,000-square-foot practice facility and community skating rink, becoming an anchor tenant no one could have envisioned when Northgate Mall opened 70 years ago. But don’t worry. Northgate will still have a substantial amount of retail offerings sprinkled within this new mixed-use oasis.

Not all mall properties need such massive redevelopment to stay valid. Stonestown Galleria in San Francisco is an example of repurposing and re-using the existing structures to achieve the same result. At Stonestown, the property owner, Brookfield Properties, transformed a three-story, 1950s-era, concrete building that was once home to a Macy’s department store into a vibrant, mixed-use building with Regal Cinemas, Whole Foods Market, and City Sports Club fitness center. Plans have also been considered to add residential units to outer parking lots at the property.

Similarly, at Tysons Galleria in McLean, Virginia, a former Macy’s department store building is being repurposed to house a movie theater, a bowling venue, and multiple retail shops and restaurants.

At Pacific Place, which opened in 1998 in downtown Seattle, the mall’s owner embarked on a two-year redesign project aimed to open the indoor mall to outside passersby, create public gathering places, and attract customers from large corporate campuses nearby. To achieve this, the project included two new entrances, an extension of the central atrium, a grand staircase, and a four-story glass facade to allow in natural light.

Redeveloping former anchor stores and retail properties that are in trouble is not an easy task. These retrofit projects can be complex and costly. But if the new plans mostly work within the existing structure, they are generally faster and more sustainable than the tear-down-and-rebuild alternative.

Most retail centers exist in strategic urban locations: near population centers, transit hubs, and busy transportation corridors. These properties are too valuable to sit vacant for long. Rethinking the purpose and potential of these shopping malls — including their vast parking lots and vacant anchor spaces — just might be the key to their long-term viability. Retail centers of the future will transform themselves to include mixed-use spaces for offices, apartments, public gatherings, and yes, even retail stores. This transformation will allow the retail sector to thrive for another 50 years, at which point, I imagine, it will need to transform once again.