Buying or selling dirt? Now there's a map for that 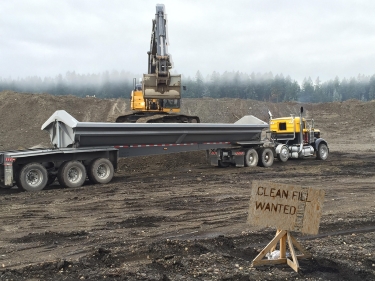 When Chris Parshall drives along Interstate 5 and sees an empty dump truck, he sees a missed opportunity.

Aside from the added traffic congestion and carbon emissions from running empty trucks throughout Washington and the rest of the United States, Parshall said money is thrown down the drain on every truck that makes a dirt haul one direction and returns empty.

Like many Internet entrepreneurs, Parshall sees an inefficiency in the way companies do business and wants to use the web to connect people to fix a problem.

“As I rode down I-5 and saw empty trucks, I kept thinking ‘If these guys could somehow connect, there would be no reason to drive with an empty truck,'” Parshall said. “If I could find someone who needs something hauled on their return trip, then everybody wins. Before our website, there was no way to connect everybody.”

His solution was Site Import Export, http://www.SiteImportExport.com, which went live six months ago.

The inspiration for the site actually came to Parshall in 2009, but at that time he said the cost to build a multi-functional business website was prohibitively expensive — to the tune of $100,000.

But, with the explosion of website development companies that use software platforms such as WordPress, Parshall had his website built more than a year ago for about $5,000.

Parshall said the website has grown to 1,500 members in a few short months with no advertising. It costs about $10 a month to subscribe, with discounts for multi-month subscriptions.

The idea, he said, is simple. “It's a way of connecting people in the dirt community,” he said.

The concept of connecting groups selling or giving away items via the Internet is almost as old as the Internet. Sites such as Craigslist regularly advertise free fill dirt, and http://www.Dirtfill.com and http://www.Tonsofdirt.com connect contractors with excess fill dirt to people who need it.

“Ours is the only map-based site that is totally controlled by the user,” Parshall said.

Members of Site Import Export buy a “pin” (represented by a push pin on a map) that describes the member's goal. In some cases, members have fill dirt they want to sell and have hauled away, and in other cases members are truckers who are making a delivery and want to return with a full load to be dropped off to a different client. Members can use the site, whether they are hauling “10 yards or a million yards” of dirt or fill, he said.

The site serves large hauling companies and construction firms looking to make money on their backhauls (return trips after delivering), as well as small-time individual sellers hoping to move a few hundred yards of fill from their construction site or home.

“We had a homeowner in Maple Valley last summer who needed 20 yards of clean fill moved from his property,” Parshall said. “They posted their message on our site at 9 a.m., and by 9:30 a.m. they had a phone call from a trucking company,” he said. “The owner had a sign on his property for fill dirt for sale all summer long and had no responses. With our website, it turned out to be a win-win for both parties.”

The website, Parshall said, is the culmination of a life spent in the fill-hauling business. His father and grandfather have been involved in construction for more than 75 years, and Parshall said it was natural for him to follow in their footsteps.

“I love the challenge of moving dirt,” he said, admitting that he's always had a child-like fascination with hauling dirt. “I went to school to get a construction management degree and half-way through I left school and decided to use the money to get my first excavator instead,” he said.

With the cost-savings found through inexpensive website development tools, Parshall said he hasn't needed to rely on venture capital funding.

Aside from economic motives and the passion to leverage the web to solve a relatively simple problem, part of his motivation to launch the website came from his concern for the environment and climate change.

“We're all stewards of the land,” Parshall said. “If there's something I can do to lessen the damage to the environment, then it's a no-brainer. It's just common sense because our carbon footprint in this state is horrendous.

“You couple that with traffic issues because of construction on (state Route) 520 and I-5,” he said. “A truck can be 70 feet long and that's a lot of highway space.”

Parshall said he reasoned that the website could save a lot of people a lot of money, ease traffic congestion by keeping dump trucks operating in a more efficient manner, and cut back on the amount of trucks running around empty.

The site lists a handful of commercial pits, fill sites and export sites around the West Coast. The site is designed to serve customers around the world, though Parshall said his initial focus is on the Seattle area.

“We're using Seattle and the Northwest region as our guinea pig,” he said. “The U.K. is the next place to go, and then we will roll out the service for South America.”

To make the website work in European and other non-English speaking countries, he said additional coding will be necessary.

But once that coding is done, he said, “At the flip of a switch, we can be world wide.”

Parshall has four other workers for the website, which he said has yet to turn enough profit to quit his day job. “We are not getting rich, but we are cash positive,” he said. “We are seeing listings being posted that give us good subscription-based revenue that all goes back into the business.”

For the time being, Parshall juggles duties between the website and working as a senior program manager for Tunista Construction, a Federal Way general contractor.

He said the website has relied on word-of-mouth. Users who pay to post pins on the website's map benefit by having the pin link to their company's website, he said.

Parshall said he's confident that the site will succeed, after witnessing first-hand the inefficiencies of fill-hauling.

“Every project we have ever estimated, or actually performed, all had one thing in common: there was always a closer, and cheaper source for fill material, or location to dump excess material,” he said. “We want people to use our website to see if we can keep trucking and hauling to a minimum, because the traffic is not getting any better.”