Automated construction sites are coming, but that raises some big questions about safety 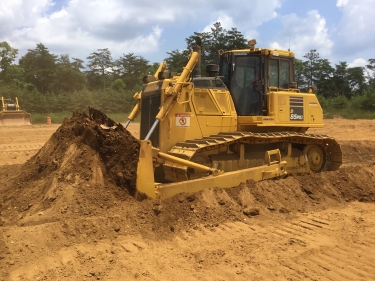 When Fady Masoud was pursuing his degree in civil engineering, he didn't envision the technological changes in construction that would eventually guide his career in a new direction.

Masoud, vice president of Tapestry Partners of Auburn, these days divides his time between working in the Northwest and frequent trips to Hawaii, where Tapestry consults with local contractors on software and hardware for semi-autonomous machinery that is part of a transformation in the way construction sites operate.

“We use this technology every day,” Masoud said, “from excavators to dozers for grading roads.”

New GPS-guiding technology for heavy machinery is flourishing as contractors search for ways to work more efficiently, he said.

This technology — combining software and GPS systems — is making it possible for contractors on large highway and earthwork construction projects to use semi-autonomous equipment for bulldozing and road grading, as well as quarry work.

The high-tech equipment, he said, improves efficiency up to 40 percent and is accurate to within a quarter-inch of specifications for projects such as road grading.

Rapid advances in semi-autonomous and autonomous software for construction vehicles will eventually bring significant changes to nearly every type of construction, according to Masoud.

Already, major players in the areas of mining have adopted technology that allows dozers and haulers to work autonomously around the clock — bringing large advances in equipment output.

Rio Tinto coordinates the trucks' movements remotely from its operations center in Perth, nearly 800 miles away. The company said it aims to eventually have its whole system work autonomously from “pit to port” by using autonomous dozers and haulers, as well as robot drills and unmanned trains, all controlled from Perth.

The automated system improves safety, efficiency and productivity, according to Rio Tinto. Driverless trucks, according to the company, eliminate driver fatigue and reduces wear-and-tear on machinery.

Software for the autonomous machinery relies on three-dimensional terrain models that compute how to optimize work on pre-specified grades.

Heavy equipment manufacturer Komatsu in 2013 introduced a major advance in this technology with its hands-free, fully automatic blade control in the D61EXi bulldozer series, using what it calls Intelligent Machine Control. The blade is controlled by 3-D construction data using design drawings that are paired with maps provided by drones from Skycatch of San Francisco. 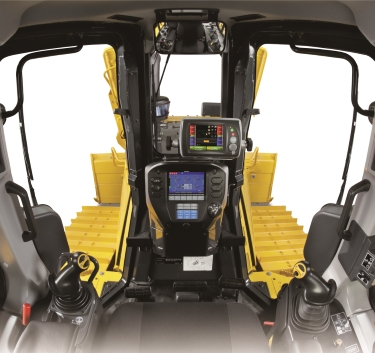 [enlarge]
The upper screen in the Komatsu D65i-18 dozer shows the operator that the machine is working in auto mode.

Major car companies in the United States and abroad are also racing to advance automated driving, while also finding that the technology has its limits.

Though the automated driving technology is advancing quickly, federal regulators in the United States are still working on rules to ensure safety in light of the May 7 accident involving a Tesla driver in Florida, who was killed using the car's autonomous driving system. The Tesla crash called to question whether current software can make split-second decisions to avoid accidents.

John Schaufelberger, dean of the University of Washington College of Built Environments, said he sees limits but also advantages to using autonomous construction machinery on work sites such as highway projects or airport runways.

Schaufelberger said the initial investment in the software and hardware to run autonomous machinery can be offset by productivity enhancement.

“In most cases, a computer monitor screen inside the machine will allow companies to be much more efficient and can reduce the cost of surveyors,” Schaufelberger said.

He said the use of semi-autonomous and autonomous machinery also presents a “big safety issue” for workers who are near such equipment.

“I think there are a lot of challenges before we can have a fully automated construction site,” he said. “It depends on the piece of equipment being used autonomously. Safety is a paramount issue.”

Richard Glass, director of information services with the highway civil contractor KLB Construction of Mukilteo, said his company saves on surveying costs through the use of GPS systems on all its construction machinery.

“The GPS topographical models aid our operators,” Glass said. But he said KLB has not begun using fully autonomous machinery on its projects.

Masoud predicted that it's just a matter of time before semi-autonomous and autonomous machinery will be found on all work sites.

“The biggest advantage of this technology is that it removes errors and mistakes,” Masoud said. “Once we have created a 3-D model of the site, we have the tools to gather the information on how to use the equipment efficiently.”

He said Tapestry consults with contractors using machinery that is semi-autonomous, meaning that an operator is still required to “mitigate problems” that arise and the operator must still tell the machinery to “go from one activity to another.”

But he said the technology does allow hands-free operation of equipment. “If you take your foot off the pedal, the machine will truly grade automatically,” he said. “But the operator does have to do some of the maneuvering.”

Considering the advances in autonomous and semi-autonomous technology in agriculture, Masoud said it's inevitable there will be widespread adoption in construction.