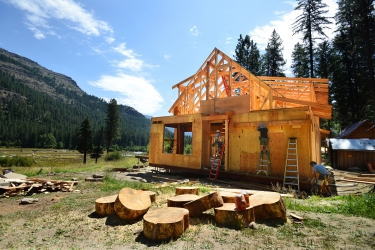 E.J. Harris/East Oregonian via AP [enlarge]
Crews are about half finished with the 4,000-square-foot Minam River Lodge.

PENDLETON, Ore. — When the Minam River Lodge was built in 1950, livestock hauled in most of the equipment.

A sawmill was constructed on site to build the lodge and cabins, but mules provided the muscle when a 400-pound refrigerator needed to travel up and down the mountains to its new home deep in the woods, reported the East Oregonian.

Now, 56 years later, as the crumbling lodge and old refrigerator are being replaced, some things have changed but many have not.

The helicopters are new. Construction manager Ben Gates, of UP Architecture in Portland, conscripted copters to make 97 supply drops into the 127-acre inholding that is surrounded entirely by the Eagle Cap Wilderness. Everything from timber to glass touched down at a small airfield within sight of the main lodge. At a cost of more than $2,000 an hour to rent a helicopter, just bringing in supplies cost “six figures,” said lodge owner Barnes Ellis.

Ellis is a former reporter for The Oregonian turned investment banker who lives in Portland. He vacationed at the property growing up and purchased the property at auction in 2011.

“There is no forgetting this place,” he said.

But it needed work. Lots of it. Decades of erosion had rendered the main lodge unsalvageable, and a smattering of cabins and outbuildings needed major renovation or outright replacement.

For the past five years, that work has slowly progressed. But this spring, after the snow melted, it hit high gear. The business has been closed for all of 2016 as the main lodge was destroyed and a new one erected.

“This has grown into a major, major project. If I knew when I started how much work it would take I'm not sure I would have started,” joked Ellis. “But now we're into it and we're going for it.” 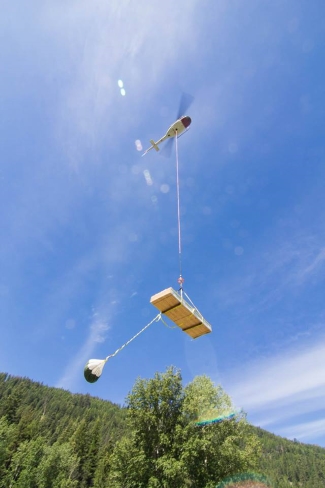 The plan is to build a 4,000-square-foot luxury lodge in the middle of the Eagle Cap Wilderness, where visitors can enjoy high-quality food, running water, showers, electricity and numerous amenities. Electricity is currently supplied by a combination of solar power and gas generators, though Gates said when construction is complete, solar could supply nearly all the necessary power.

The cost will be steep — roughly $500 a night to rent a large cabin — and that does not include the cost of getting there. Ellis expects he will help many of his customers charter a plane from Enterprise, Joseph or La Grande to fly into the lodge.

Others will hump it. The closest trailhead is Moss Springs, about 8.5 miles away, and some will travel the route on horseback while others will use their own two feet. For the more economical traveler, Minam River Lodge will offer raised platform beds with linens, in a teepee or wall tent, for roughly $100 a night. That allows customers to make use of communal showers and a wood-fired hot tub.

Ellis imagines the lodge as a place where both types of people will meet, converse, dine together and enjoy the natural world arrayed in front of them. The Minam River can be seen from the currently under-construction deck, water that both threatened salmon and bull trout call home. Hunters will be another main customer base since they have nearby access to elk, bear, cougar, deer and more.

Ellis envisions visitors forking over $500 a night to fly in from places like Portland or Boston and stay for a week, while others will arrive sweaty and hungry and looking for a place to rest their head for the night.

But first they've got to build the thing.

Isaac Trout has served as an on-site construction superintendent, living and working at the site for much of the year. An avid outdoorsman, he used his bow to bag a mammoth elk within hiking distance from the property last year.

He said the opportunity to live and work in such a beautiful, wild place has been incredible, as is building “something that will be historic.”

It hasn't been easy. Trout and Gates have had to figure out how to erect their lodge without the use of cranes and lifts and other benefits of modern construction. Getting the main joist in place with just a few hands and little more than an ATV took some planning and ingenuity.

But that has brought another kind of benefit.

“It has forced us to plan in the way that contractors always want to do, but never have time for,” Gates said. There is no running to a hardware store for an extra box of nails or sheet of plywood — and the waste of hours that entails. Everything had to be accounted for and planned in order to get rigged up for a helicopter ride and then its final place on the construction site.

“We've been pretty good and pretty lucky,” Gates said. “We don't have a lot of waste and we don't have much extra.”

Sweyn Wall, of the U.S. Forest Service recreation program, said the lodge has been good neighbors with the Forest Service. There are a few other inholdings within the 361,000-acre wilderness area, including a few in the upper Minam area.

Wall said Barnes and the lodge have been “partners on a variety of projects, and we consider ourselves good neighbors.” He said there are important issues that the lodge and USFS must stay on the same page on, especially the water system that originates on Forest Service land and the sewage system, as well as how they operate along a designated Wild & Scenic River.

But Wall sees benefits to inholdings and commercial operations such as the Minam River Lodge.

“One of the main challenges we face as an agency is trying to keep folks vested,” Wall said. “The more we can encourage people to use and appreciate wilderness, the stronger the argument we have for it.”

The construction project is halfway complete, and crews expect it to be open next spring. It is unknown if the lodge will open year-round, but when it is operating it can house up to 30 guests and will employ 11-12 people full-time. Other contractors will see benefits from the business, including pilots and horseback outfitters who will help ferry and entertain guests.

The massive project is a financial risk, Ellis admitted. But once people see the view from the lodge — and the lodge itself — he thinks they will have a hard time leaving, especially after they contemplate that 8.5-mile hike back out to civilization.