6 years and $2.4B later, Central Link ready to roll

When Central Link light rail trains begin carrying passengers on July 18, it will complete one of the region’s biggest and most amazing construction projects since Interstate 5.

Building the nearly 14-mile Central Link line overcame challenges presented by Puget Sound’s unique landscape of hills and waterways. To meet the challenge, planners, engineers and construction crews built a light-rail line that runs under downtown Seattle, through Beacon Hill, at street level in Sodo and Rainier Valley and on elevated tracks to Tukwila. Link passengers will cross over I-5, a major railroad yard and the Duwamish River before reaching Tukwila International Boulevard station near Sea-Tac Airport. The 1.7-mile connection to the airport will open late this year. 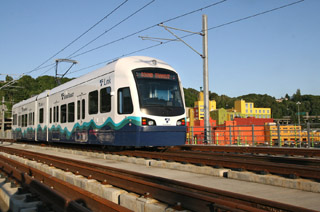 That, of course, doesn’t include the human element, which includes approximately 10,000 jobs created and more than 9 million union construction hours of work.

Another way to look at this enormous project is to break it out by construction segments: Downtown Seattle, Sodo, Beacon Hill, Rainier Valley and Tukwila.

The downtown tunnel was closed two years to prepare it for light-rail trains.

Work in the tunnel included adding 18,000 feet of new rails, a communications and signaling system, new electronic variable-message signs and lowered station roadbeds to make it easy to get on and off modern buses and trains. Today, it’s the only tunnel in the world where light-rail trains and buses will run together.

In addition to the tunnel improvements, Sound Transit built a short “stub tunnel” under Pine Street between Seventh and Boren avenues that allows light-rail trains to stop and reverse direction.

The stub tunnel also makes the University Link extension possible without any interruption to bus and rail service in the tunnel.

Trains running through Seattle’s Sodo district will stop at newly constructed Stadium and Sodo light-rail stations. More than 10,000 jobs are located within a half-mile of the Sodo station.

Part of the line through Sodo was built for trains running at grade; however, a mile of the segment is on elevated trackway. One of the challenges facing the construction was the soil — the Sodo area was originally filled tide flats, and unstable soils at stations and trackways had to be reinforced. Noise and vibration to local businesses caused by driving piles to support the elevated section was carefully monitored during early construction.

Sodo is also home to the new 162,000-square-foot Link operations and maintenance facility built on a 25-acre site south of South Forest Street and west of Airport Way. The building, where the light-rail fleet is stored and serviced, had to be built on 1,100 steel piles for stability.

When you’re riding past the O and M building on a Link train, be sure to look for the big red neon “Rail” sign on the building. That familiar-looking “R” came from the old Rainier beer sign from the brewery once located at the same location. 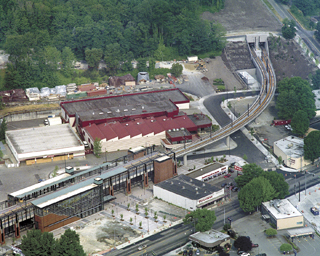 Photo by Sky-Pix [enlarge]
Side-by-side tunnels were drilled through Beacon Hill so trains can move in opposite directions. The Mount Baker station is in the foreground.

Building the Beacon Hill tunnel was a complex and remarkable part of the Link project. It’s actually two tunnels built side-by-side: a southbound and a northbound tunnel that allow trains to run in either direction.

The huge drilling machine that bored the tunnels moved about 50 feet a day, eventually digging out about 50,000 cubic yards of soil per tunnel. It wasn’t easy. The tunnel machine had to cut through complex glacial till soils ranging from sand to boulders. As it dug, a robotic arm on the machine installed precast concrete segments that created the strong, watertight ring forming the tunnel’s permanent liner. Shotcrete strengthened the walls of the underground Beacon Hill Station, located 16 stories below ground. High-speed elevators will carry passengers to the station.

Incredibly, after drilling nearly a mile, the tunnel boring machine, using sophisticated tracking technology, came out within a half-inch of its target — for both tunnels.

Adding more than 4 miles of surface light-rail trackbed was the highlight of work through the Rainier Valley. But it was much more than that.

Construction in this segment required outstanding cooperation and coordination with the residents and businesses in the valley.

More than 4 miles of this 5-mile segment runs on elevated tracks, which is essentially a 5-mile-long bridge supported by 190 columns rising as high as 80 feet. Ironworkers screwed together sections of the bridge by hand.

The contractor building this segment, PCL, used an innovative construction method never before seen in our region, with a 385-foot-long gantry truss that “walked” from column to column along the alignment. The gantry lifted each 35-ton precast concrete segment into place and supported the segments while crews fastened them together with steel cables. Once a span between two columns was completed, the gantry moved on to the top of the next column.

Now that construction of the Link light-rail project is complete, the people of this region are already looking to the future.

Construction is under way on University Link, the 3.15-mile underground extension of light rail from Westlake to the University of Washington, scheduled to open to passengers in 2016.

And following voter approval of Sound Transit 2 last November, trains will someday extend east over Lake Washington to the Overlake Transit Center, north to Lynnwood and south to the Federal Way area. All are estimated for completion between 2020 and 2023, and together will result in a 55-mile light-rail system serving the region’s most congested areas.

Joni Earl is the CEO of Sound Transit.