While the light-rail stations at Tukwila and the airport share a segment of International Boulevard, they are dramatically different in their respective roles in the system.

SeaTac/Airport station not only is the gateway to the region for air travel, it serves as a pedestrian link to a developing neighborhood of the city of SeaTac. Plans are already under way for transit-oriented development in the area.

By contrast, the Tukwila International Boulevard station at 154th connects regional bus transit, paratransit and park-and-ride to the system. It too will support future transit-oriented development based on SeaTac’s master plans, though these plans are on a more extended schedule.

The Tukwila International Boulevard station is located on the boundary between the cities of Tukwila and SeaTac. This station has an obligation to the scale of future mixed-use development while holding its own against the adjacent freeway. The station, with its prominent site, also has an opportunity to symbolize the Link light-rail system to the thousands passing by each day. 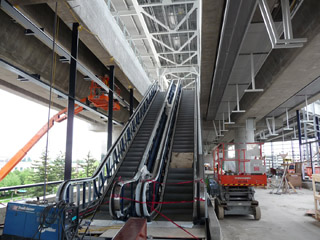 Photo courtesy of Hewitt [enlarge]
Yellow escalators at the SeaTac/Airport station will signal the activity inside. The project, set to finish in December, is being built by Mowat Construction.

Parking and bus connections are major components in the design of the station. To make the most of the site for multimodal operations, the station is suspended from the guideway rather than supported from the ground.

This allows the entire area below the station to be a plaza for pedestrian connections and transit activity. The height of the platform and the topography of the area suggested that a covered platform and mezzanine area were critical for customer comfort.

We also saw the opportunity for two significant symbolic gestures. First, the customers are invited up to the mezzanine level via a “scoop” entry on a diagonal axis that clearly suggests how the station works. Its form and color signal the entrance from the plaza and park-and-ride.

The second significant architectural gesture was the roof. The sloping landforms and the notion of flight inspired the strong angular extension of the structure, which is already a landmark from the freeway.

Art is integral to the design of the plaza and station. Artist Tad Savinar created two major art pieces on the mezzanine level.

On the north, “A Molecule for the Region” brings forward important landmark symbols of our region. To the south, “A Drop of Sustenance” illustrates one of our most familiar natural elements: rain. Savinar also designed platform floor tile entitled “Voices of Tukwila.”

Seattle artist Clark Wiegman created “Soundings,” located at the escalator entrance, which reminds us of the area’s historic and natural resources. 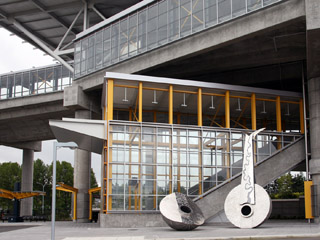 Photo courtesy of Sound Transit [enlarge]
A pair of stainless steel sonic sculptures depicting split hazelnuts by Seattle artist Clark Wiegman mark the entrance to the Tukwila International Boulevard station. An LED “light river” on the piece to the right traces the course of the Duwamish River.

The mezzanine level, which is the mixing chamber for the station, is aligned with parking level 4 of the airport garage. This concourse connects the terminal, the airport parking garage and the neighborhood to the east as well as to the station platform above, where you catch the train.

Two pedestrian bridges link this station to its neighbors, one over International Boulevard for passenger drop-offs and bus connections, and the other to the west, which connects to the airport parking garage.

This west bridge is being constructed by the Port of Seattle. The port will also provide a new pedestrian walkway inside the garage that delivers travelers to the terminal. (The port bridge and the internal walkway are designed by Hewitt.)

The SeaTac/Airport station presents a strong visual impression from International Boulevard, and the signal yellow escalators inform users of the activity within. The expressive structural truss that supports the upper roof differs in form from Tukwila’s but provides similar identity to the station and the system.

Artist Werner Klotz has created two large stainless steel triangular sails whose spinning armatures will enliven the use of the escalator. Artist Christian Moeller has produced a colorful, moving lineal ceiling element in the bridge over International Boulevard.

On the plaza to the east, Seattle artist Fernanda D’Agostino has created a sculpture and video art piece named “Celestial Navigation” to enrich the experience of the passenger drop-off adjacent to International Boulevard.

Two stations in close proximity express connectivity, provide accommodation and symbolize a new era in transportation in the Northwest — for an architect it doesn’t get any better.