In November of 2005 commuters traveling on state Route 518 in Tukwila may have been startled to see a very large yellow crane that seemed to be lying on its side on top of very thin concrete columns.

This was the beginning of a permanent change to the Seattle skyline. The above-ground portion of the track was beginning to take form for the Sound Transit Central Link light-rail system.

The design team, consisting of Hatch Mott MacDonald, International Bridge Technologies and T.Y. Lin International, used a system that allowed the concrete casting of the bridge superstructure to be performed at the same time as the column substructure, expediting the overall construction schedule. 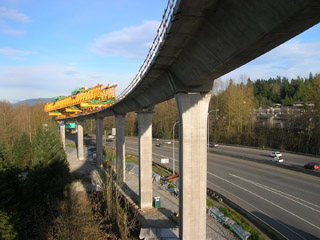 Photo courtesy of PCL [enlarge]
This gantry crane, the first of its kind in Washington, placed eight to 13 concrete segments at a time between the column spans to build the guideway.

There were a number of challenges, including architectural sensitivity, difficult access, stringent environmental restrictions, multiple stakeholders and high seismic loads.

Varying from at-grade to a towering 80 feet above ground, the majority of this portion of the light-rail alignment is located adjacent to existing freeways and through wetland areas. Winding through the Tukwila valley, the guideway crosses multiple freeways, waterways and railways without impeding traffic.

One of the challenges facing the construction team was the limited right-of-way available for construction. The solution was to construct the concrete bridge segments off-site using the top-down construction method, a decision that reduced land acquisition costs and the environmental impact of construction.

At completion, the overall footprint for construction was minimized by using a 40-foot-wide access road, reducing environmental impacts and producing a sleek superstructure and column design, ensuring the guideway’s visual impact was minimized.

Designed for severe seismic loads required in the Pacific Northwest, the slender columns are heavily reinforced. The density of reinforcing steel called for a unique way of placing the concrete by bottom-up pumping.

PCL worked closely with Stoneway Concrete to develop an alternative to normal concrete methods. The concrete was installed in 8-foot lifts, pumping from bottom-up to heights of up to 60 feet. The result was a superior concrete finish requiring little remedial work and reduced labor costs. 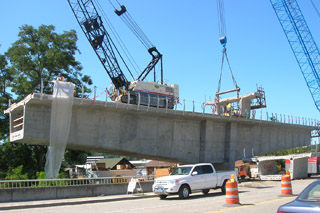 Photos courtesy of PCL [enlarge]
A crane mounted on the bridge deck enabled construction crews to erect bridge segments from above.

The crane, also called a launching gantry or truss, was purchased specifically for this project. The first of its kind used in Washington, it was shipped from England to Seattle in 38 containers. As the gantry worked its way east alongside SR 518 and turned north along Interstate 5, it lifted 1,872 concrete segments, each weighing between 35 to 50 tons.

The gantry’s winches were able to lift and place segments up to 80 tons. The gantry itself weighed 500 tons and was 375 feet long, 20 feet wide and 44 feet tall. There were between eight and 13 segments placed at the same time between each column span.

The segments were manufactured in Bethlehem Construction’s casting yard in Cashmere, 150 miles east of Seattle, and transported by truck, one at a time, sometimes through very treacherous mountain weather conditions.

Using the balanced cantilever method of bridge building provided the means to hurdle over numerous busy freeways such as I-5 without the use of dangerous and obtrusive shoring systems one normally sees. This method of bridge construction is done horizontally into space without the assistance of equipment directly below it.

There were 12 cantilever bridges on this project that included a total of 398 segments. One of the challenges was the Duwamish River bridge structure. Regulations limited the use of any floating equipment in the waterway, thereby restricting PCL’s access to the structure.

The adjacent roadway structure capacity was unknown, but the initial engineering reviews showed that it would not tolerate the loads imposed. The team developed a top-down approach using a crane mounted on the deck so it could erect segments from above.

This crane was fed by a second crane located at the column, which provided the segments from the trucks. This innovative approach offered PCL the chance to erect precast segments this way for the first time.

The construction of the Tukwila International Boulevard station was included in this section of the project. The building design provided for the guideway structure to be integrated with the station structure, providing a seamless effect in the final product.

This unique structure included placing nearly 8,000 cubic yards of structural concrete, erecting 800 tons of structural steel and a building envelope, creating a new icon on the Tukwila landscape. Also included at this station are a “kiss-and-ride” passenger drop-off and a park-and-ride lot.

From design to construction, this project delivered all of Sound Transit’s promises that it would be constructed in a timely, cost-efficient manner with minimal impacts to the public. PCL Construction congratulates Sound Transit for the successful completion of the Central Link light-rail project. We are proud to be a part of the Sound Transit team.

Rachel Quesinberry is the marketing coordinator for PCL Construction Services.