The long bridge to Tukwila 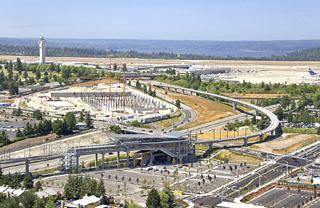 Photo courtesy of Sound Transit [enlarge]
The 24,746-foot-long bridge, shown at the Tukwila station, is longer than any major highway bridge in the Northwest. It crosses Interstate 5, the Duwamish River and a rail corridor.

For many residents of the Puget Sound region, a first sighting of Sound Transit’s progress on the Link light rail system was en route to the airport.

With columns reaching up to 60 feet into the air and adorned with eye-catching reflectors, the elevated structure and new station along state Route 518 are hard to miss. Less obvious is that, at 4.7 miles long, this elevated light-rail track structure may very well be the longest bridge in the Pacific Northwest — and a first for the state of Washington in bridge technology and construction.

The Sound Transit C755 Tukwila contract, as it is called, begins at the south end of Rainier Valley and runs south through the cities of Seattle, Tukwila and SeaTac. The Tukwila International Boulevard station at International and Southcenter boulevards (South 154th Street) is the temporary terminus until the Seattle-Tacoma International Airport station opens in December.

At 24,746 feet long, the entire Link bridge structure exceeds the length of the other major highway bridges in the Northwest, including the Astoria-Megler Bridge at 21,677 feet, which is the longest highway bridge in both Washington and Oregon, spanning the mouth of the Columbia River between Astoria, Ore., and Megler, in Pacific County.

However, Link’s Tukwila structure touches down to ground level in three separate places, so the longest section comes in at 10,024 feet. No matter how it is measured, the structure is a feat of engineering for the region.

In order to reach from Rainier Valley to the airport, C755 needed to cross Interstate 5 and the Duwamish River.

Proximity to the interstate meant Sound Transit was able to use highway right-of-way, and little land acquisition was required, which minimized disruption to nearby residential and commercial neighborhoods. However, freeway proximity presented a new challenge to be addressed: how to best minimize impacts to traffic when building a structure that crossed over more than 12 lanes of the busiest north-south freeway in the Northwest.

The unique method of construction that Cody refers to is the use of precast concrete segments, which were manufactured at an assembly-line casting yard in Cashmere. Each of the 2,457 segments was designed and cast to unique specifications and was carefully inspected for quality. They were then transported over two mountain passes by semi-truck 150 miles from the casting yard to the project site.

Once the segments arrived on site, they were lifted into position using an overhead launching gantry.

Post-tensioning describes the process used to assemble the erected segments, forming a cohesive structure. First, the segments were attached with what amounts to a very strong glue, and then high-strength steel cables within the segments were intertwined and tightened with hydraulic jacks.

One advantage of this construction method is that it minimizes disruption to the immediate community by reducing how much concrete needs to be transported and placed on site. But perhaps more significant is the difference in the way the project can be scheduled.

“You can build foundations, columns and segments — all at same time,” said Eric Forsyth, former quality assurance/quality control manager for Parsons Brinckerhoff, the consultant firm selected by Sound Transit to manage the contractor, PCL, during construction. “You can also bring in the segments at night and it doesn’t affect the traveling public.”

Keeping construction duration to a minimum was significant for other reasons as well.

“The guideway crossed wetlands and paralleled streams. In the years of record rainfall, erosion control was a daily challenge,” said Cody.

Other scheduling challenges included a 350-foot span over the Duwamish River and a crossing over a major corridor of eight freight rail tracks belonging to BNSF Railway and Union Pacific. Despite all of these challenges, the construction team met its schedule milestones.

The use of this design and construction methodology was also a first for Sound Transit, and given the segment’s success, it has the thumbs up for future use.