Find out if your school is fit for a retrofit

If necessity is the mother of invention, then recession must surely be at least a second cousin of sustainability.

During this beleaguered economy, even those who typically don’t lose sleep over the state of the environment benefit from the sustainable concept that less is more. Less money in your wallet equals more opportunities for cleverly making do with what you’ve already got.

For those nostalgic for mid-century architecture, one positive outcome of this prolonged recession is that lack of capital funds forces institutions to transform existing facilities from what they have into what they need. Designing to LEED standards or Washington Sustainable Schools Protocol often results in structures that are environmentally better than their non-certified counterparts. However, in many cases, the best form of sustainability is renovation, adaptive reuse or energy retrofit. Washington state leaders seem to agree.

Last June, state schools superintendent Randy Dorn announced that $100 million in competitive grants for public K-12 and higher education were established for energy-related retrofit projects. Primarily intended as a stimulus for the economy, the program is a welcome appropriation, especially considering that state matching funds are typically not available for such improvements.

Allocating funding for energy efficiency while retaining original architecture is a worthy cause. Although tough to quantify precisely, some experts estimate that a building’s embodied energy — what it takes to construct the structure — is somewhere between 35 and 60 percent of its total energy use over the course of its life.

As buildings get progressively more energy efficient, this proportion will rise. Increasingly, it will be more fiscally and environmentally responsible to expect educational facilities to serve multiple generations of occupants than to rebuild every few decades.

But where does one begin assessing a building’s deficiencies and determining whether a building is sound enough to remodel? Building forensics is an excellent place to start. 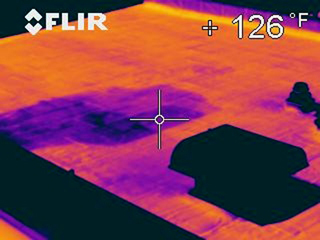 [enlarge]
An infrared thermographic image was taken by helicopter at night to show where water was trapped under a roof. Images like this can help owners decide whether structures should be repaired or replaced.

In its five-year history, BCRA Building Science has assisted a number of education clients in their effort to maintain facilities and correct inadequate building details.

Science, along with engineering and architecture, allows the Building Science group to deal with the symptoms of building deficiencies as well as provide solutions that will last the life of the building. In some cases, these solutions can extend the service life of the building and provide ongoing energy savings, which in turn helps to pay for the retrofit in the first place.

Demand for building science diagnostics will continue to grow as Washington adopts the new 2009 state energy code, which has a new requirement for a continuous air barrier and limits on whole-building air leakage rates. Although initially the air leakage performance standard will be required only for buildings over five stories, there are many good reasons to voluntarily opt for constructing buildings with an air barrier to meet the state’s performance standard. Four important benefits of a properly installed and tested air barrier include: 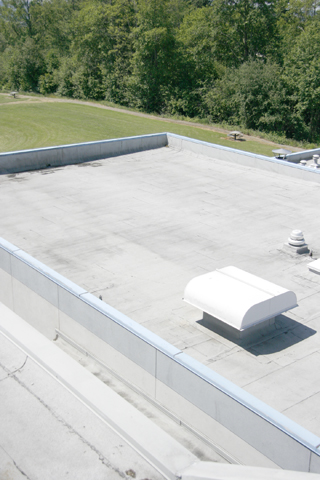 • Identifying cold spots or drafts caused by air leaks in the exterior envelope, which prevents student distraction in classrooms and assembly areas due to uncomfortable buildings.

• Reducing air leakage into and out of a building, allowing the HVAC system to be sized smaller and use less energy without affecting the building’s desired temperature level.

• Avoiding sick-building syndrome caused by mold growth in the exterior envelope, which is kept alive by air-transported moisture through air leaks.

• Preventing insects and outside pollutants from entering the building.

More and more, education facilities are requiring building science services due to issues of water intrusion. Common complaints include staining and deterioration of interior surfaces.

Determining the exact location of a roof leak is often tricky. Although the water may enter the building in one location, it tends to travel along structural members, revealing itself in another location on the interior.

BCRA’s team has created an approach that effectively addresses these issues by developing and employing a system of noninvasive tests. For instance, infrared thermographic images of buildings taken during a nighttime helicopter fly-over can show the extent of water trapped under the roofing, which is critical in making the decision to repair or replace the roofing. A closer investigation of roofing details will typically unravel the rest of the mystery and reveal a solution.

Recently, an education client was better able to prioritize demands on their budget by enlisting BCRA to determine the true condition of several campus building roofs. Following a review, one roof the school had feared needed immediate replacement was deemed to be in acceptable condition. This allowed capital funds to be diverted to more critical repairs.

Another school client was plagued by a heaving concrete slab in their district’s large central freezer. Initial speculation was that the subsurface system of pipes intended to keep the area under the slab temperate had failed.

Using noninvasive infrared thermography, it was determined that the expansion problem was instead due to a unique condensation issue that sent moisture down one wall of the freezer, where it migrated and froze beneath the slab. The problem was economically fixed by thawing the freezer slab and controlling the moisture source. By locating the true cause of the damaged slab, a costly demolition and new concrete pour that was planned for the freezer floor was averted, saving the client approximately $150,000.

Infrared thermography has many other useful applications. For one parks and recreation client, photographs of the exterior walls of their pool building revealed an extreme case of moisture condensation trapped within the walls, causing degradation of cladding materials, enormous energy bills and the formation of rust on interior surfaces.

The culprit in this case was determined to be an unbalanced HVAC system pushing moist air through the interior walls, where it met with cold air from the exterior to form condensation that could not escape the wall cavity.

While major portions of the building required complete insulation and cladding replacement, nondestructive techniques were used to discern which areas of the exterior required replacement and which areas were unaffected.

Recessionary times are perfect opportunities to maximize sustainability through building renovation and energy retrofits. With the help of high-tech diagnostics and construction detail expertise, clients can make the most of their capital, operating and maintenance budgets.

Gail Merth is a design director and architect at BCRA specializing in educational facilities. Lee Durston is the director of Building Science at BCRA.