While these lower-impact bioretention systems, or “rain gardens,” have been used to help manage stormwater on many area projects, few, if any, have so deeply involved the collaborative efforts of the permitting agency, the owner and the design team.

Designers reached out to King County when they realized that the nature of the site’s planned landscaping and bioretention areas would not only satisfy requirements prescribed in the 2009 King County Surface Water Manual, but also eliminate the need for a sizable detention vault and costly water treatment system. The design team provided extensive analyses, agreed to rigorous field testing and put in place a seven-year monitoring system, convincing the permitting agency to modify its requirements for this project.

The county’s concessions to allow this pilot project will not only save the Lake Washington School District more than half a million dollars, but will also allow the school — which houses the Environmental Adventure School — to practice what it preaches through its sustainable design. 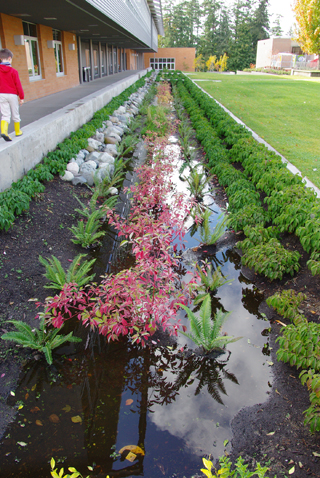 Photo courtesy of Coughlin Porter Lundeen [enlarge]
The rain gardens at Finn Hill Junior High will resemble this outdoor classroom area when they’re completed in the fall of 2011. Here, native plantings grow in a shallow depression that collects rainwater runoff.

The school district’s goals for the Finn Hill Junior High School site’s redevelopment were to achieve cost-efficiency and reach net-zero energy consumption, so the inclusion of an environmentally friendly stormwater management system made sense.

Rain gardens are designed to manage water closer to where the rain falls, rather than at the end of a long pipe system used by more traditional stormwater systems. In contrast to more traditionally used detention vaults, rain gardens involve less excavation and grading, have a smaller carbon footprint, are more aesthetically pleasing, and help create a natural habitat for plants and wildlife.

Usually a shallow depression less than 18-inches deep, a rain garden allows a small amount of water to collect. The rain gardens also have amended soils beneath the surface that treat and store runoff while allowing plants to thrive. Multiple systems are usually dispersed throughout a site and are highly effective at cooling and slowing stormwater runoff, removing pollutants and helping sustain downstream waterways.

The Finn Hill Junior High campus project offers a low-impact drainage system that includes a series of rain gardens and the site’s natural slope to treat and route stormwater to an existing wetland. All stormwater generated by classroom pods are diverted to rain gardens that form outdoor learning spaces.

Instead of hiding stormwater facilities in the back corner of the site, they are highlighted and situated for the education and enjoyment by students, faculty and staff. While program requirements still called for the installment of a detention vault, it was able to be designed 40 percent smaller than it would have been without the flow-control contributions of the bioretention areas.

“It’s terrific to be able to use a smaller and less-costly detention system,” said Forrest Miller, Lake Washington School District’s director of support services, “but even more beneficial is the fact that we’re also able to meet requirements while getting a system that can be used as a learning tool.”

While the use of rain gardens was a no-brainer for the school district, the county, which is in charge of permitting the project, was less enthusiastic.

While rain gardens are considered acceptable stormwater systems that mitigate some runoff, the county had always required significant — and sometimes costly — safeguards to alleviate flooding during heavy rains and ensure that runoff is appropriately cleansed. The project’s design team knew that the design of the rain gardens would adequately address these issues without requiring the addition of a robust water catchment and filtering system. They just had to prove it.

“It’s reducing peak runoff and treating the water at the same time. The county, with its initial guidelines, was not recognizing this advantage.”

King County was specifically concerned that the soil material in the bioretention areas would be unable to consistently control the flow of runoff. It also questioned the levels of phosphorous in the mulch layer, fearing its discharge into the downstream system.

The team addressed the county’s concerns with some fairly simple adjustments and by providing additional analyses demonstrating that the bioretention systems would function well even with varied infiltration rates — from a half-inch per hour up to 2 inches per hour. The landscape architect, Cascade Design Collaborative, specified a mulch containing less than half of the maximum phosphorous allowed by the state’s Department of Ecology standards. These solutions satisfied the county on both counts.

The stormwater management design for Finn Hill Junior High was approved as a one-time solution by the county on the condition that rigorous field testing would be performed both before construction and after installation of the new bioretention areas. Specifically, the water level and water discharge rate from each rain garden will be monitored and compared with the design team’s initial analysis. After the project is completed and accepted by the county, the bioretention areas will continue to be monitored for seven years.

Lake Washington School District agreed to construct a test bioretention system in the corner of the project site that will be monitored throughout the construction process. It will also purchase testing equipment and fund the monitoring by the county. Despite what may seem like added costs, the savings that come as a result of the rain garden system far outweigh the cost of testing and long-term monitoring.

Early involvement of authorities is what has made this project a smooth one, said Mitch Kent, associate principal and project manager with the job’s architect, Mahlum.

“It’s a continuing strategy of our office to involve officials during the earliest stages (of a project),” said Kent.

“We were proactive in meeting with (the county) to discuss our ideas. We made sure there was time allowed for all parties to understand the proposed solution.”

The design team incorporated rain garden areas to handle runoff from paved parking areas and also did extensive stormwater modeling to ensure the rain gardens on both campuses were placed in areas that provided the greatest benefit while ensuring compliance with governmental regulations.

The Finn Hill Junior High redevelopment project is the first, however, on which the team was able to work closely with a permitting agency to effect a project-specific adjustment to prescribed regulations. From a design perspective, the effort was worth it.

“These results may allow us to calibrate our model of bioretention systems,” said Porter, from Coughlin Porter Lundeen.

The pilot project may also result in some lasting changes at the county.

“If the experimental system performs to standard for this site and at least two other sites in the future, we would likely make revisions to the county’s requirements to allow regular use of the system on other projects,” said Curt Crawford, stormwater services section manager for the county’s Water and Land Resources Division.

Completion of the Finn Hill Junior High redevelopment is expected in the fall of 2011.

Keith Kruger is a project manager at Coughlin Porter Lundeen.