Why are school construction costs so low?

Studio Meng Strazzara recently completed design and bidding on three projects for the Northshore School District. All the bids were constructed during this favorable bid climate.

The projects, which included a new transportation center, Woodinville High School and the Secondary Academy for Success, all bid 20 percent to 25 percent less than what they would have cost a year earlier. What does this really mean?

It is old news that construction costs have fallen considerably, and nobody needs to read another article stating that fact. So what exactly costs so much less, and why?

Whatever you have heard about China or the price of copper, you should put these and other commodity-oriented factors in a category somewhere in between “minor details” and “red herring” for the time being. Labor productivity and risk are the primary contributors to the bidding climate that we are experiencing today. These elements are very much intertwined. 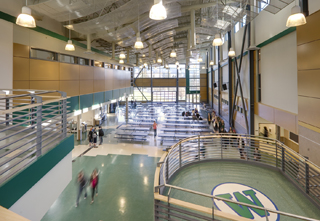 Photo by Steve Keating, courtesy of Studio Meng Strazzara [enlarge]
The Northshore School District took advantage of lower construction costs when it built a student commons at Woodinville High School with high ceilings and generous glazing. The commons serves as a cafeteria and a meeting and activity space.

Unfortunately for many, our labor market has fallen with the overall economy, and construction craft workers have been hit hard.

As in other industries the layoffs that have taken place, while sad, have left us with a more productive construction workforce. In some trades, we can document productivity increases of 20 percent to 30 percent from projects that require total cost substantiation as part of the invoicing process and from “open book” pricing, which is required for some of our general contractor/construction manager projects.

But labor rates have increased, which offsets much of these savings, right? Wrong.

The labor rate that matters is not the prevailing wage for a particular craft or a union agreement, which spells out wage and fringe benefits cost for a journeyman craft worker. Yes, those have gone up, but this increase does not equate to the hourly labor cost on your project.

What matters is the “blended” crew rate.

What is a blended rate? It is the average rate paid to the crew for a specific trade or project.

Two years ago the crew rate included a much higher ratio of foreman and general foreman wage earners. At times the ratio could be as high as one foreman to one journeyman.

This was viewed as necessary at the time to maintain your crews. Today, we see crews that include much higher ratios of journeyman and apprentice workers, with the corresponding lower hourly rates factoring into the blended rate.

The result of this is a “blended” labor rate, which is more or less unchanged from two years ago.

The average self-performing construction contractor’s labor risk has dropped dramatically, and labor is the biggest area of risk that a trade contractor has.

Clarity of design documents, materials price volatility, schedule, logistics and other things all factor into the perceived risk, but not anywhere near as much as labor. How contractors analyze and manage risk separates the profitable ones from the rest. It also affects the bids that you are seeing today.

Today, most trade contractors can count on the following:

• few, if any, of these workers leaving in the middle of the project; and

We all know that in order to win a project these days you usually have to keep your margin very low. Less well known is that margin is directly related to risk, and in some cases it is interchangeable.

Several years ago I was a project manager for a large mechanical contractor. The company did not refer to “margin” on its internal bid forms. Instead, we had a line called “coverage,” which meant, “How far above my estimated cost can I go before I actually lose money on the job?”

Coverage of risk concerned the firm more than trying to make a killing. That number could be 10 percent or it could be 40 percent.

If my risk is less, then I don’t need as much coverage. Add this to increased labor productivity, higher certainty that I can achieve my productivity goals, and the fact that I must take some risk if I am to be competitive, and you have de-escalation.

Decreased materials prices have not hurt either, but don’t be fooled about where the real money is.

Now that we know why buildings cost less, what are we going to do with this information and how do we benefit from it?

One option is to bank the savings. Informed cost-estimating efforts should produce estimates that reflect today’s bid climate, and the owner might choose to reduce the budget.

Another option is to use the savings to add sustainability features or to add features that pay back over time, such as condensing boilers or solar panels. This is a popular choice.

A third option is to use some of the savings to add quality and functionality.

For Woodinville High School, Studio Meng Strazzara worked with the Northshore School District to develop a concept with high ceilings and generous glazing in the food service space. The initial design objective was to create a commons area able to support various activities in addition to serving as the cafeteria.

The design was continually reviewed for cost. An alternative design with lower ceilings was developed that, though less expensive, would not have supported as many uses. As it became apparent in 2008 that the bid climate was becoming friendlier to the district, the value of the original concept was reinforced.

Now completed, the students and staff have embraced the space as the new center of the campus. In its first year, the commons was used for events such as dances, presentations, school concerts, club meetings and alternate curricular space.

The construction cost was slightly higher than what might have been achieved by banking the savings, but a collaborative, information-based evaluation of the architect’s design resulted in a facility with higher functionality.

From an owner’s standpoint, it’s a great time to build projects. You’ll benefit most from today’s bid climate by making fully informed decisions. See that any proposal to spend or bank savings is backed up with detailed information about life-cycle cost and user benefits.