What it takes to navigate a down market

During times of market recovery, it’s valuable to assess how we might have done things differently to maintain momentum in the marketplace. This time around, though, it may be more prudent to concentrate on the positives from the past few years and assess why some development projects moved forward while others did not.

There are two often overlooked factors in launching a project during a market downturn: a strong commitment to core competencies; and the nurturing of diverse long-term relationships. These are the lessons that we can learn from, largely because they work in both up- and down-cycles, especially in the multifamily development arena.

Just look around. The most significant projects that came online during the recession — a time of considerable risk for apartment development — were completed by companies that understood the cyclical nature of real estate and had a profound knowledge of the local markets. These companies built their reputations over many years, creating a specific product type for a highly targeted demographic, and in geographic areas of need.

Neighborhoods that saw new development included the Rainier Valley, West Seattle, parts of Bellevue, and other communities close to jobs and services.

The past few years were no time to stray too far from your development mission, and those that remained consistent are now being rewarded. As the local and national economies have improved, demand for in-city, newly built apartments has proportionately increased. The projects that were able to get financing are now filling up fast to the delight of their owners, investors and neighborhood businesses. In contrast, some developers of stalled projects now may regret their decision to delay or cancel their respective projects. 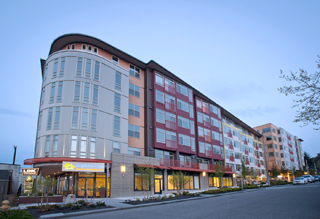 [enlarge]
Harbor Properties was able to finance the Link Apartments in West Seattle during the recession.

For one, there wasn’t a better time to develop multifamily projects from a cost-basis perspective. Subcontractors were hungry and the best crews were retained for construction work. Scope and fees for architecture and engineering were highly negotiable. And interest rates were at historic lows.

If a developer and its investor were able to swallow the initial equity requirements, they could have attained project costs at 10 percent and 20 percent below today’s development costs.

Of course, it takes financial partners to make developments a reality, and that is where a long-time track record and strong relationships come into play.

Link Apartments in West Seattle’s Triangle neighborhood is the perfect example. By the time the project was initially proposed, Harbor Properties had already established a portfolio of moderately priced sustainable apartment buildings in Seattle’s urban communities.

This solid track record meant something to our investor partner, who was able to overlook the project’s short-term risk and focus instead on Harbor’s expertise in workforce housing, the cost-basis opportunities and its confidence that a market recovery was closer than many had originally expected.

Groups come together to make things happen in times of need. In the case of Link, cultivating and leveraging the unwavering support we received from each of these groups helped to make it an ultimate down-market success.

The deeper and more expansive the relationships, the more likely the developer is to be successful. That’s because the developer can better predict existing and future needs of the renter and the local neighborhood.

All developments need champions, from all corners of the business, residential and governmental communities. The more in-tune developers are with these audiences, the more likely their architectural design, product mix and retail-tenant objectives will be with local influencers.

That means a quicker lease-up based on positive testimonials and referrals. And in today’s wired marketplace, word travels fast when a project’s on point or not with the community’s vision.