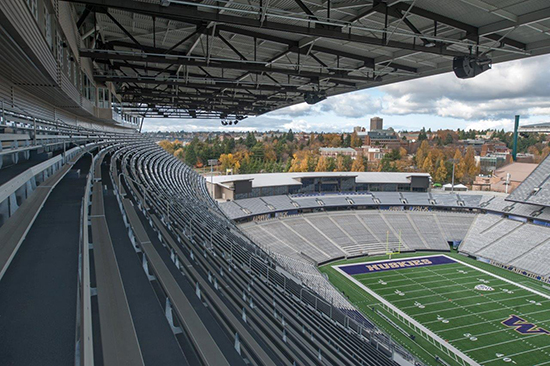 Photo courtesy of WACA [enlarge]
Concrete from the 1920 stadium bowl was crushed on site to form the subgrade of the new stadium foundation.

When Husky Stadium was first built by the Puget Sound Bridge and Dredging Co. in 1920 the construction material of choice was concrete. It was selected for its durability, economy and constructability.

Fast-forward more than 90 years when the latest stadium renovation was being planned. Even though the lower concrete bowl was crumbling in spots, it was a no-brainer to replace this iconic Northwest structure with the same material.

The existing concrete had held up well past its life expectancy and was an integral part of countless memories. In fact, the stadium’s nearly century-old recycled concrete — 26,300 cubic yards in all — demonstrated its sustainability by being demolished and crushed on site to form the subgrade of the new stadium foundation.

After the old stadium was demolished, construction on the new one began. A total of 37,200 cubic yards of concrete was poured in the main structure as well as 1,800 cubic yards of site concrete around the stadium.

Cast-in-place stadium seating risers were formed and poured in 450- to 1,500-foot lengths over 140 consecutive work days.

More than 11,000 linear feet of vertical walls were formed and poured. Many of these concrete walls included encased structural-steel columns to assist in resisting uplift of the cantilevered roof system for the south stands.

Concrete was also used for the buckling-restrained brace frames (concrete-filled steel tubes), which married the great compressive strength of concrete with the tensile strength of steel, resulting in an economical way to handle any future seismic forces. The use of these critical elements throughout the stadium will also help with fan-induced accelerations during the games.

Cast-in-place concrete was an integral part of the stadium design because of its aesthetics, durability, constructability and overall sustainability for this iconic building.