When structural engineers reach for concrete building code documents late this year, they may be surprised at what they find.

ACI 318, the longstanding guide for structural concrete design and construction, has been completely reorganized in a way that, its writers hope, will be easier to use by the industry.

Every three years, the American Concrete Institute’s building code committee updates ACI 318 — the code to which concrete buildings and other structures are designed and built. These changes are then adopted by the International Building Code, which is the document followed by all 50 states and several other countries as the standard building code. ACI 318’s most recent changes — arguably the most dramatic since 1971 — is now available for review by the public.

In recent decades, changes to ACI 318 have revolved primarily around updates in materials and design technology — revisions that reflect new materials, better knowledge of structural systems’ behavior, and new construction systems and analytical approaches. The changes introduced in this version, however, revolve mainly around the organization of the code requirements, shifting the focus from a “force-based” to “element-based” format. 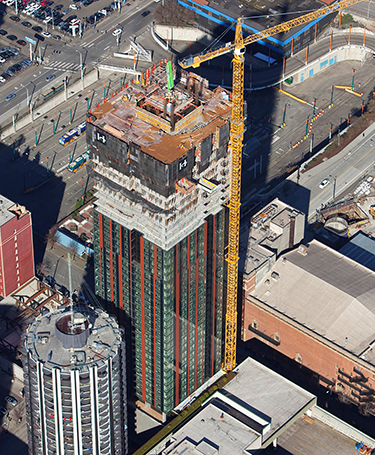 Photo by Soundview Aerial [enlarge]
Structural engineers will use an updated code to design concrete buildings such as Premier on Pine, a 42-story tower under construction in downtown Seattle.

In other words, instead of chapters dealing with forces affecting concrete structures such as “shear” and “flexure,” chapters will now be arranged by the building elements themselves, such as “slabs,” “columns,” and “beams.” Within each chapter will be all the requirements necessary to design that particular element.

This will eliminate the need to flip through several chapters to comply with all of the necessary design requirements for a particular structural member, as was necessary with the old organizational format. The code’s new design can be compared to a cookbook: all the ingredients for baking a cake such as eggs, flour, sugar, oil — along with the baking instructions — are in one chapter, instead of individual chapters on eggs, flour and sugar.

As the understanding of structural behavior and materials had increased over the years and design techniques had evolved and matured, existing chapters in the old code had been expanded to include the new information. The result was a complex document that had become confusing and often off-putting for its structural engineer users.

Depending on the structural member being designed, requirements from five or more chapters often needed to be met, requiring structural engineers to virtually memorize the location of key requirements due to the nonintuitive nature of the code’s layout. So, while the task of reorganizing a code that had grown from a small booklet years ago to a much larger and more extensive document today seemed somewhat overwhelming, the ACI 318 committee nevertheless decided six years ago to move forward. The consensus was that reorganization was long overdue and would ultimately benefit code users.

With the new ACI 318, structural engineers will be able to access all necessary information for any structural element — beams, columns, footings, walls, etc. — in one convenient location. The exception will be design information that applies to multiple elements. This information will be contained in “toolbox” chapters and referenced from the others to avoid redundancy. For example, requirements for rebar bends, splices and detailing will be contained in one chapter and referenced by other chapters to eliminate the need to repeat it multiple times.

The code reorganization did not come without challenges. One of the most difficult was dealing with the need to update it and reorganize it simultaneously. As it turned out, the time required for reorganization was so significant that some proposals for updating technical and other code requirements were shelved until the next issue of the code.

While the revised ACI 318 code itself can’t really be called simplified — it remains at about the same page count as its previous version — its reorganization should offer a code that’s easier to use and more welcoming to current and future designers of concrete buildings.

Cary Kopczynski is CEO of Bellevue-based structural engineering firm Cary Kopczynski & Co. and a long-time ACI 318 committee member. His firm has designed numerous concrete buildings throughout the United States and beyond.